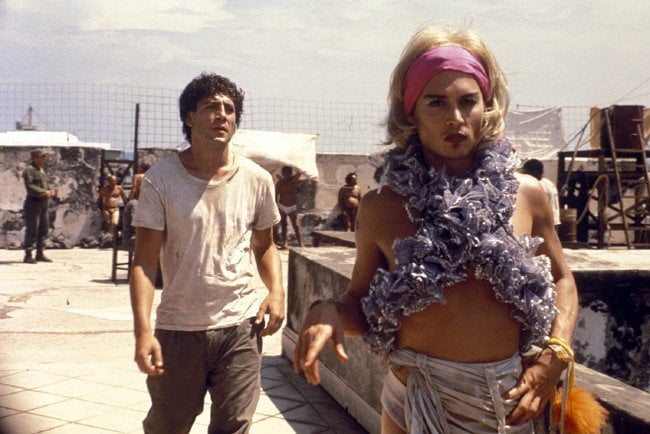 'My mother returned to her parents' home with me as proof of her failure.'  So Cuban author Reinaldo Arenas (Javier Bardem, "Jamon, Jamon," "Live Flesh") describes his earliest memories where he equated complete poverty with absolute freedom. Educated by the revolution which put Castro into power when he was just sixteen, Arenas won a national book award at twenty with his first novel "Singing From the Well." From that point on, his homosexuality made him a pariah in communist Cuba and he was constantly being hunted or imprisoned until 1980 when he left Cuba in the Mariel Harbor boatlift. Artist/director Julian Schabel ("Basquiat") adapts Arenas' final memoir for the screen in "Before Night Falls."

"Before Night Falls" is an artistic interpretation of a life, shown in an impressionistic manner. We're given a mosaic of memories, shards of recollections and frequently left to fill in the gaps.

Arenas' earliest childhood was spent in a dirt poor and rural area where he was essentially ignored. A dark man approaches and gives him two pesoes while his mother screams and throws rocks. Reinaldo discovers this man is his father - the only time he ever sees him. (This event is evidently significant enough to be included, yet never given perspective within the film, nor is the obviously strong bond with his mother (played by Schnabel's wife, Olatz Lopez Garmendia) explored in depth.) Then the family moves to Holquin ('a town of 200,000 people and one garbage truck') where he becomes acquainted with hookers before being swept up in the romance of the revolution, which is presented in what appears to be old news footage and home movies.

Arenas is given the first five of the '150 all encompassing works of literature' by an encouraging professor (Melvile, Robert Louis Stevenson, Proust, Flaubert and Kafka), which he accepts like treasures. A good author must also be a great reader and Arenas is given a plum job in the national library. His homosexuality is first hinted at by the furtive looks he exchanges with a young man while at work. Soon he's hanging with the wealthy Thomas and his crowd, who drive about in his white convertible. Not long after, his troubles begin.

"Before Night Falls" was adapted for the screen by the director, Cunningham O'Keefe and Lazaro Gomez Carriles, Arenas' lifelong friend (played in the film by Olivier Martinez, "The Horseman on the Roof"). This story about an author concentrates more on his general biography than his writing (which, I presume, is conveyed more within the film's visuals). What caused his books to banned in Cuba? If it was exclusively the author's homosexuality, that is never made clear in the film. In fact, the scattershot approach to telling this story, while sometimes effective, is often equally frustrating. Characters appear out of nowhere and disappear. Relationships and locations are often unclear. We only know Arenas was dying of AIDS (he committed suicide in New York City in 1990) by deduction. (On the other hand, Schnabel makes sure we get his use of irony in his last scene by prominently featuring the 'I 'heart' NY' logo on a plastic bag at least three times.)

Bardem has a great shaggy head, expressive Raul Julia-like eyes and a Greco-Roman nose, a rugged handsomeness which he combines with a geeky body language, curving his shoulders inward and allowing his arms to hang limply at his sides. While his is a good performance, the alienation of the character and the disorienting filmmaking kept me at arms length emotionally.

Johnny Depp has a dual role as Bon Bon, a flamboyant prison transvestite (with a talent for smuggling impressive amounts in his nether regions) and as a cruelly seductive prison Lieutenant. Depp is a fearless actor and comes across well, even in these showy, brief roles. Not so lucky is Sean Penn who appears in the film for 1-2 minutes as an overly made up Cuban peasant. This bit of stunt casting seems right out of John Huston's 1963 film "The List of Adrian Messenger" and is more distracting than the star presence is worth. (Another distracting moment in the film comes when Arenas attempts an escape to Florida in an inner tube - Schnabel uses the same haunting recording Herzog used in "Aguirre, the Wrath of God," which immediately yanked me to Peru.) Michael Wincott ("The Crow," "Basquiat") is almost unrecognizable as another oppressed poet.

The film has some great imagery (cinematography by Xavier Perez Grobet and Guillermo Rosas, production design by Salvador Parra), such as Reinaldo sitting on the rocks by a sparkling sea, the aftermath of a hedonistic, bohemian sendoff for a hot air balloon, and Reinaldo and Lazaro lying on the trunk of a convertible driving through the snow of nighttime New York City.

Schnabel clearly has great admiration for his subject, but while he attempts to share the artistry and feeling of Arenas' work, his historical account of the man's life is lacking.

Winner of the Grand Jury Prize at the 2000 Venice Film Festival, "Before Night Falls" tells of the life and the writings of Cuban exile Reinaldo Arenas. The gay author spent years in and out of Cuba's jails for his inflammatory prose and poetry before escaping to the United States in 1980. Javier Bardem plays the persecuted writer and co-stars with the likes of Johnny Depp, Sean Penn and Michael Wincott in a film by Julian Schnabel.

Javier Bardem does a fine job of portraying the intelligent, talented Arenas as we follow him, first, as a young man showing an interest in the written word (and men bathing), and, later, as he garners critical attention for his first novel. He develops such a following and notoriety that he comes under the scrutiny of Castro's police and their Russian masters because of his deviant "capitalist" lifestyle. This begins a tale of persecution and a personal fight for creative freedom that last up until Arenas leaves his homeland in the Mariel Harbor exodus of 1980, when Castro evicted all of Cuba's "deviants, homosexuals and mentally ill" to the shores of the US.

The tone of the story of "Before Night Falls" is more political and social in nature, showing Arenas' persecution for his homosexuality and his politically motivated work. The machismo of Cuba is threatened by the sexual revolution getting under way in the 50's and 60's around the world. The oppressive totalitarian government actively tries to subdue this other revolution with arrests of gays, sending them to cut sugarcane as rehabilitation. Arenas never gave up, getting his written word out of the country for publication by any means. At one point he even uses a transvestite inmate's behind to smuggle out the pages of his latest tome. (Check out who plays the transvestite.)

The depiction of Cuba, by Schnabel and production designer Salvador Parra, over the years the story unfolds, is generic and doesn't give the feel that "you are there." The main means used to show the Cuban location is by having everyone walking around smoking cigars, even some of the women. The scenes on the streets of Havana have an obvious movie set feel, pulling attention away from the action

The screenplay, by Schnabel, Lazaro Gomez Carriles and Cunningham O'Keefe, brings us, point by point, along the way as we follow Arenas through his life, his incarcerations and escapes. Once he finally is freed, Arena spends his last days with a disease we can only guess is AIDS - filmmaker Julian Schnabel fails to tell us about it, so I can only guess. This kind of omission detracts from the story, as it requires the viewer to unnecessarily guess what's going on.

"Before Night Falls" is hopeful tragedy that shows the strength of the human spirit under adversity. The tragedy is that not everyone is as courageous and talented as Reinaldo Arenas, who, when he finally escapes the oppression of Castro, realizes that he has lost his Cuba. Javier Bardem is solid in his portrayal of Arenas, even if the script is weak.