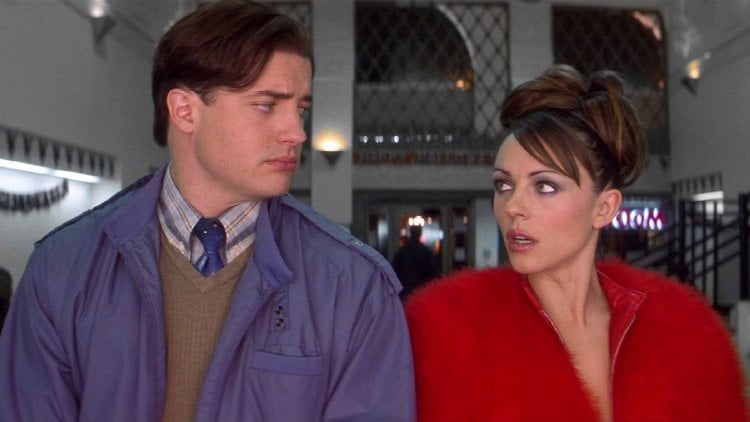 Elliot Richards (Brendan Fraser) is a socially inept guy who alienates those around him with his overbearing manner, constantly failing when he tries to be hip. He's also had a years-long crush on a co-worker, Alison Gardner (Frances O'Connor), but she barely knows he even exists. Desperate, he asks God to help him. Instead, a knockout, gorgeous woman (Elizabeth Hurley), claiming to be the Devil, offers him a deal - seven wishes in exchange for his mortal soul, in director Harold Ramis's update of the 1967 flick, "Bedazzled."

It has been many years since I saw the original "Bedazzled" with Dudley Moore as Faust and Peter Cook in the Mephistophelean role. The inherent silliness of the earlier movie - at one point, Moore bounces on a trampoline while dressed as a nun - didn't appeal to me. I had hopes that the modern update would be an improvement, especially with the likable Brenda Fraser taking on the Faustian role.

The new "Bedazzled" may not garner any awards or attention for its actors at the end of the year, but it is still a fun little flick that is easy on the head and, with Hurley as a sexy Devil, easy on the eyes, too. It's also a good showcase for the comedy and acting talents of Fraser. I liked the young actor from the very beginning when he appeared as a caveman thrust into modern times in "Encino Man," He also held his own, in a serious perf, opposite Ian McKellar in the marvelous 1998 movie, "Gods and Monsters." Here, in "Bedazzled," Fraser gets the chance to play a variety of characters, all as Elliot, as he takes on a new lifestyle with each of his wishes.

Wishes, let me say, are handled a little differently here than one would traditionally expect. To me, one wish would be for one thing - money or fame or power, whatever. In "Bedazzled," wishes are actually packages. One wish, by Elliot, is for marriage, money and power. Another is to be brilliant, articulate, sophisticated and charming. It's not such a bad deal if you ever get your own seven wishes. Elliot, though, has to deal with the Devil's interpretation of what a wish actually means and suffers the consequences of her mischief.

I can forgive the Hollywoodization of the wish thing, mainly because it gives Fraser the chance to play a variety of different roles, putting a unique spin on each. Best of all is when Elliot gets his first wish and unknowingly ends up as a Colombian drug lord - this sequence provides the film's best belly laugh as our hero realizes that he can speak Spanish fluently. As each wish goes awry, Elliot experiences different lives in his quest for Alison, who is the focus of all his wishes. He asks to be the most emotionally sensitive guy in the world, but puts Alison off with his constant crying at the beauty of the sunset. He asks to be a famous basketball star, but is disappointed when his "equipment" is lacking. When he wishes to be smart, the Devil puts a twist on the request and makes him gay, too. With each failed wish, Elliot becomes more and more desperate and gets arrested at a church when he demands to talk to God.

Rife within this amusing little tale is a bunch of practical messages that eventually have an impact on Elliot. Morals like: be careful of what you wish for, you might just get it; and, you can't get what you want out of life just by wishing, are peppered through the film. The biggest impact on Elliot, though, comes from a chance meeting with an enigmatic guy in jail who tells Elliot that he can't sell his soul because it is not his to sell. His soul, the stranger tells him, belongs to God. His advice is to "open your heart and open your mind. You'll get it." These few words of wisdom give Elliot the impetus to confront the Devil and, in the end, redeem himself. Elliot changes from the overbearing, insecure doofus from the beginning to become a wiser, selfless individual in the end.

Elizabeth Hurley has a damn (pun intended) good time as the Prince, let's make that Princess, of Darkness who sees her role as a perpetual thorn in God's side. She takes enormous pleasure as she screws up Elliot's wishes for her own amusement. She also gets to change from one devilishly sexy costume to another, drive a Lamborghini Diablo and corrupt a classroom full of pubescent boys. Hurley doesn't do a lot of thesping here, but enjoys herself nonetheless. Frances O'Connor, as the love interest and object of Elliot's desire doesn't get much of a chance to stretch as she has to play opposite Fraser's broadly comedic perf.

Techs, as expected in a Harold Ramis film, are first rate. Academy Award winning production designer Rick Heinrichs ("Sleepy Hollow") provides varied and imaginative sets, including a vision of Hell as designed by our she Devil in her nightclub, DV8. We get two glimpses, over the course of the film, into this demonic world. The first time we enter, things appear pretty benign, but, as Elliot comes more and more under the Devil's influence, our next journey into the Miltonesque Underworld takes on a bizarre, satanic tone.

The camera work, provided by veteran lenser Bill Pope, perfectly suits the action. Special visual F/X are ably handled by four-time Oscar winner Richard Edlund - one sequence, near the end, has Elliot thrust down into the fiery inferno of Hell and confronted by a giant version of the Devil. The F/X are matter-of-fact and don't draw the viewer's attention away from the comedy and action, even when a 7'6" Elliot comes onto the scene. Notice also needs to be made for the variety of makeup schemes, by Ben Nye Jr., for Elliot as he goes from one wish to the next, dramatically changing his appearance for each life.

"Bedazzled" is plain, old-fashioned fun with lots of humor and a colorful production - and it clocks in at about 90 minutes. Fraser further establishes himself as a solid comic performer, easily able to carry a film. I was pleasantly surprised.