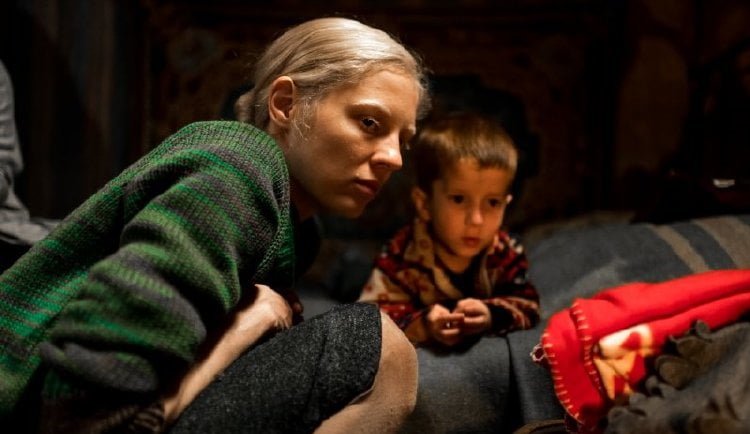 The siege of Leningrad, the worst in mankind’s history, is ended and the shattered, tattered citizens try to build a new life. Iya (Viktoria Miroshnichenko) was mustered out of the army because she “freezes” from PTSD and her friend, Masha (Vasilisa Perelygina), is back from the war. The two try to salvage their lives damaged from the horrors of the war in “Beanpole.”

WWII has finally ended, but its effects are still strongly felt in Leningrad. Iya Sergueeva (Viktoria Miroshnichenko) is a nurse in a hospital, wartime PTSD causing her to frequently ‘freeze’ into trance-like states, a condition that cause the death of the five year-old who calls her mummy, Pashka (Timofey Glazkov). But Pashka was really Masha’s (Vasilisa Perelygina) child, put into Iya’s care when she left the front, and when Masha learns of her son’s fate she becomes obsessed with the idea of having her very tall friend become a surrogate mother in “Beanpole.”

Cowriter (with Aleksandr Terekhov)/director Kantemir Balagov’s look at how two women deal with war’s after effects is a strange affair indeed, a case of codependence which shifts the narrative beneath our feet, a screenwriting device which helps us understand Masha yet keeps its titular character a cipher. Balagov’s work with a mostly nonprofessional cast is impressive, but it is problematic that his most relatable character is a supporting player. “Beanpole’s” most distinctive element is its use of color, Sergey Ivanov's production design limiting its spectrum to the brilliant greens symbolizing life, rich golden ochers and muted reds.

If the tall, thin, blond Iya is withdrawn, the red headed Masha is her opposite. Upon learning of Pashka’s death, Masha wants to go dancing. The two women attract the attention of two men on the street and while Masha lustily copulates with one of them in his car’s back seat, Iya’s reaction is to drag him out and beat him, a foreshadowing of her revulsion when she later acquiesces to Masha’s wish and attempts conception with the hospital’s kind doctor Nikolay Ivanovich (Andrey Bykov).

Meanwhile, Masha has hooked Sasha (Igor Shirokov), the son of the wealthy Lyubov Petrovna (Ksenia Kutepova), when they visited the veterans’ hospital to distribute gifts. If he arrives at their room in their communal apartment bearing apples, Masha demands more. But his eventual proposal will bring reality crashing down, Masha’s war story changing dramatically. In the end, these two women have only themselves to lean on.

“Beanpole” is a bleak story, one where even the wife (Alyona Kuchkova) of a paralyzed veteran (Konstantin Balakirev, "Hipsters") agrees that euthanasia presents a better future. That it is told in jewel toned colors symbolizes the irrepressibility of life under even the worst circumstances, like the rejuvenation of a forest after a devastating fire.

Kantemir Balagov directs and co-writes (with Aleksandr Terekhov) this stark, personal story of two friends that may not appeal to all. But, the story does have appeal for the patient viewer as its two main characters cope with the end of the war and the trials and tribulations of an uncertain future.

Iya is taking care of Masha’s young son, Pashka (Timofey Glaskov) as the war draws to a close. She loves the boy as much as his mother does and, during a playful moment with him, a sudden seizure has tragic results. Then, Masha returns from the front, eager to see her little boy and to learn of the tragedy.

The story changes gears and focus as Masha decides that she wants to have a baby but she cannot. Her obsession draws Iya in and she, reluctantly, agrees to be the surrogate for Masha. Then, they have to find a suitable father.

“Beanpole,” the title refers to the tall, skinny Iya, is an odd combination of the ravages of war and its total disruption and the normal maternal needs that Masha feels. This mixture of horror and normalcy makes this an interesting study of war and humanity.