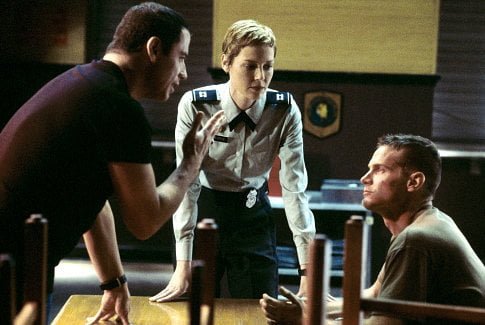 An elite US Army Ranger team, under the command of master instructor Sergeant Nathan West, makes a drop during a violent rainstorm into the Panamanian jungle on a training mission. Later, when a chopper is sent to find the now missing group, the pilots see one of the GIs, carrying a badly wounded comrade, in a firefight with a shirtless attacker. The two soldiers are picked up and returned to safety but their stories about what happened differ drastically. Ex-Ranger and DEA agent Tom Hardy (John Travolta) is called in to track down the truth about what occurred in the storm-drenched jungle in director John McTiernan's "Basic."

It's "Rashomon" meets "The General's Daughter" as John Travolta reprises a role similar to his in the latter film as helmer McTiernan drives this action vehicle that begins with two different tellings about a deadly event that smacks of sinister overtones. Ray Dunbar (Brian Van Holt) claims that one of the team, Pike (Taye Diggs), hated Sgt. West and there was a bloody showdown in a jungle bunker that the storm, a hurricane, blew completely away, leaving no trace of the violent events. Kendall (Giovanni Ribisi) tells a different spin on the story that ends the same way but points blame on another team member. Base provost marshal, Lt. Julia Osborne (Connie Nielsen), is deep into the investigation when her boss, Col. Bill Styles (Tim Daly), grants Dunbar's request to bring in a Ranger as chief interrogator. Enter Tom Hardy, an ex-Ranger and DEA investigator on mandatory leave pending an investigation into his bribe taking from a drug lord.

Tom may be under investigation himself but that does not prevent him from doing his job and he begins his interrogation by questioning the sullen Dunbar. He draws a chronicle of events out of the soldier then turns his skills on the wounded Kendall. When the two Ranger's stories don't match up Hardy and Lt. Osborne delve into the facts and fictions of the case and find that there is a huge conspiracy that affects all levels and ranks on the American military base. Tom has only a few hours to solve the dilemma.

Scribe James Vanderbilt has created a whirlwind of a script that has more twists than a winding mountain road as he takes us on a roller coaster ride of conflicting versions of events where nothing is what it seems to be. There are good guys, bad guys (though the players may be one thing in the beginning and another at the end), drug-dealing and conspiracy and a bread crumbs string of clues that all make sense in the end, although I'll be surprised if any but a few will see the final wrap up coming. There are so many twists and turns, though, that the film becomes plot heavy and requires too much attention, unless you just want to enjoy the flick. A twist or two could have been straightened out to give the viewer some breathing time to ponder things. As such, as the finale approaches, the story takes different turns and ends with an "Aha! We caught you!" finish that is amusing but too mirthful and light for what preceded it.

Travolta, who shed 25 pounds and trained with US Special Forces in preparation for "Basic," looks great and carries his usual assured self-confidence as his Tom Hardy peels the layers of the mystery surrounding the investigation. Hardy's career may be under official scrutiny but you never get the feeling from the man that he is anything less than honorable. Connie Nielsen fares well as Lt. Osborne, coming across as capable and confident, and a little naïve, as she resists Tom's intrusion into "her" case but soon learns to respect his abilities and keen mind. Samuel. L. Jackson's Sgt. West is little more than a cameo character but his presence is pivotal in the events being investigated. The rest of the cast does not get a great deal to do in their development but I have to say that Roselyn Sanchez makes one sexy Ranger that any guy would be proud to have kick his butt.

Techs, as one can expect in a John McTiernan actioner (even from such flicks as "Medicine Man"), are superbly crafted with Aussie cinematographer Steve Mason capture the humid, almost sultry air of the interrogation in soft, warm colors while the jungle action is hued in dark tones that are brilliantly illuminated briefly with lightening flashes and gunfire. The production design by Dennis Bradford also befits the film with the base mess hall used as a different kind of interrogation scene rather the typical and clichéd "sterile interrogation room." Kate Harrington's costume design, from Hardy's black T-shirt and jeans to Osborne's class A's, suits the individual characters.

"Basic" is a good-looking film that has some earnest performances but it gets too wrapped up in all of its twists and turns that, in the end, confuse more than entertain.