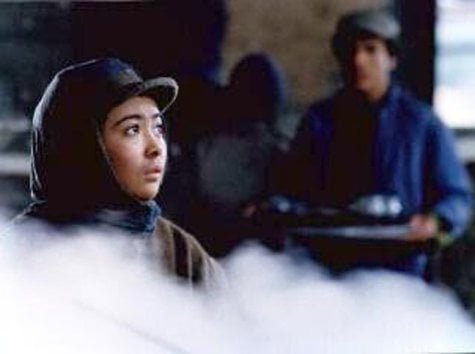 When illegal Afghani worker Najaf (Gholam Ali Bakhshi) breaks his foot, Tehranian building contractor Memar (Mohammad Amir Naji, "Children of Heaven") takes on his young son Rahmat (Zahra Bahrami) so the family will have an income.  But Rahmat is too small for physical labor, so Memar switches him with teenage Latif (Hossein Abedini), who resents giving up his cushy job preparing and serving tea and meals.  Intent on undermining Rahmat, Latif makes a startling discovery in writer/director Majid Majidi's ("The Color of Paradise") "Baran."

Majidi, working again with cinematographer Mohammed Davudi ("The Color of Paradise"), uses a much drabber palette than his last films for this subtle, melancholy work.  He does continue themes from "Children of Heaven" and "Color of Paradise," however, where a wrong carried out early on is attempted to be made right.

Latif tries to hinder Rahmat at every turn, destroying his kitchen, dumping bags of cement on his head, but Rahmat carries on, remaking the kitchen over and preparing meals that are much more appreciated by the workers than Latif's ever were.  Once Latif's eyes are opened about Rahmat's background he becomes obsessed, making it his goal to do everything in his power to make Rahmat's life easier.

Majidi lets his film linger over the minutiae of every day life, opening with a scene of flatbread being made, which Latif purchases for the construction crew's meal.  The harshness of life for the Afghani laborers is illustrated by the preciousness of an ID card and the panic which ensues when Memar must bluff his way through the periodic immigration checks visited upon his site.

Majidi's compassionate screenplay is enhanced by humor, mostly found in Memar's character.  Mohammad Amir Naji plays the man beautifully, outwardly gruff but a soft touch underneath.  The struggle of the Afghani refugees is shadowed by Latif's struggles to help Rahmat.  Every good deed he does presents him with a setback, such as when coworker Soltan (Abbas Rahimi) takes the life savings he was to deliver to Najaf and instead uses it as a loan to return to Afghanistan and his sick wife.

After beating down its central characters who seem to toil on futilely, "Baran" ("Rain") leaves us with the most unexpectedly hopeful image - that of a footstep in rain-splattered mud.  It's a hauntingly humanistic film.

Teenaged Latif (Hossein Abedini) works as a foreman's assistant making tea on a construction job in Iran. The work force on the site is comprised mainly of under-paid Afghan refugees living illegally in the country. Latif is resentful of a young boy, named Rahmat, who is given his tea-serving job, but the teen soon learns that the boy is not what he seems to be in Majid Majidi's "Baran."

His new colleague fascinates Latif's and his interest in Rahmat is explained when, quite inadvertently, he learns that "he" (Rahmat) turns out to be "she" (Baran). Baran pretends to be a boy in order to be able to work, even illegally, in Iran. She keeps to herself and does nothing to let anyone know her secret. Latif, though, is both smart and observant and discovers the truth about Baran. But, instead of revealing the girl's secret, Latif becomes infatuated with the quiet, pretty young woman as he tries to muster the courage to court her. The question is: will Latif be able to declare his love before Baran is returned to her native Afghanistan?

First and foremost "Baran" is a charming little story of innocent, unrequited love. Latif is a nice kid who has had to fend for himself and depend on the kindness of his boss Memar (Mohammad Amir Naji). He is a good worker but his tea making skills are awful. When a co-worker, an Afghan refugee, breaks his leg on the job, the injured man sends his "son" Rahmat in his place. Rahmat is a terrible laborer but has a knack for making and serving tea to the workers on the construction job. Latif is forced out of his cushy job and now must shag heavy bags of cement. His resentment toward Rahmat soon changes when he discovers the "boy's" secret - she is called Baran. Unschooled in the ways of love, Latif struggles to make his interest in the girl known. The story becomes a race against the clock as Latif works to declare his love before pretty, quiet Baran is sent back to Afghanistan.

Majid Majidi, with "Baran," has produced a film in two parts. The first part deals with the plight of the Afghans forced to flee their country's Taliban oppressors, face dangerous and oppressive working conditions for low wages, and always have the real, daily threat of being sent back to their home country. As Majidi unfurls this look at refugee life in Iran, he shifts gear to tell the story of Latif's infatuation with the pretty refugee girl. The political commentary changes into a tale of unrequited love as Latif falls for quiet Baran, lending a sweet touch to the film that counters its initial harsh depiction of refugee life.

The use of non-professional acting talent helps lend Majidi's film a documentary feel as he delves into the lives of the refugees living in Iran. The workers live in constant fear of being found out by the authorities and deported. This pressure is well depicted when the foreman, Memar, is warned that the immigration police are about to arrive on the site. He frantically chases the Afghani workers away to give the cops the impression that all is on the up and up. It is a tightrope of threatened deportation that the workers must walk daily. The story of Latif's desire for Baran tempers the reality, giving the cold harshness of the workers lives a bit of softness with the sweet, youthful love story.

Helmer Majidi is the first Iran director to receive an Oscar nomination - for his magnificent and simple tale of a little blind boy in Iran, "The Color of Paradise." The accomplished director's latest work does not have the same level of intense emotion of the former film but it certainly shows Majidi's deft hand at commanding his cast of non actors into giving an innocent, melancholy look at unrequited love. He also provides insight into the political oppression that was taking place in Afghanistan under the yoke of Taliban rule. Hopefully, with the political climate changing in Afghanistan, the filmmaker will soon be able to continue Latif's story and his quest to declare his love for Baran. That's a sequel I would like to see.