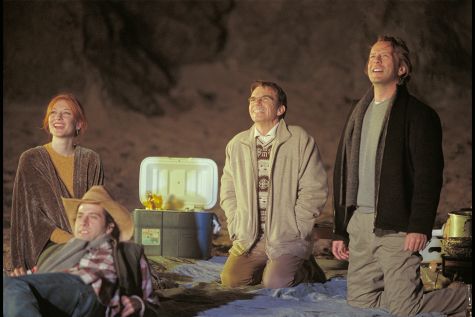 Joe Blake (Bruce Willis) and Terry Collins (Billy Bob Thornton) are bank robbers looking to make the string of scores necessary to allow them to retire, in comfort, south of the border. Their M.O. as the non-violent Sleepover Bandits has earned them the reputation as the most famous thieves in American history and their plan looks like it just might work. But, when a pretty, unhappy housewife, Kate Wheeler (Cate Blanchett), joins the tiny gang she steals something, too – their hearts - in Barry Levinson’s “Bandits.”

Impulsive man of action Joe Blake (Bruce Willis) and brainy hypochondriac buddy Terry Collins (Billy Bob Thornton) are escaped convicts who cook up a unique bank robbing scheme in their pursuit of a Mexican retirement - they take bank managers hostage in their homes, stay the night, and rob the bank first thing in the a.m., before the bank opens for business. After Terry is hit by bored, somewhat crazed housewife Kate (Cate Blanchett), he has her drive him to their hideout, and refusing to go home, she stays making the duo a trio of "Bandits."

Bookended by narration from Darren Head (Bobby Slayton, "Get Shorty"), the host of the fictitious 'Criminals at Large' TV show, we see the late Terry and Joe in their final bank standoff arguing about which one of them allowed Kate to get them into this predicament. Flashback to their humorous prison breakout, where Terry and Joe's opposite qualities are immediately established.

Joe recruits his cousin Harvey (Troy Garity, "Steal This Movie"), a none too bright wannabe Hollywood stuntman, as their getaway driver and 'The Sleepover Bandits' are born, quickly becoming folk heroes and a media sensation. The guys are able to avoid capture by donning hilarious disguises for their overnight heists. When Kate enters the picture, coming from a deadend marriage, she sees the romance of their escapades. She also falls first for Joe, then Terry, deciding that together, they make the perfect man.

The threesome are also the perfect costars. Willis spins an affectionate send up of the action roles that made him a megastar, and looks cool while doing so with his becomingly scruffy ponytail. Thornton is all ticks and twitches and physical comedy, as neurotic as Woody Allen, but quieter and more laid back. His performance is the most mannered of the three. Blanchett, stunningly flame haired here, is all wide eyed enthusiasm with a flair for the dramatic displayed as she lip synchs to Bonnie Tyler and Tanita Tikaram. She joins Cameron Diaz ("My Best Friend's Wedding") and Candice Bergen ("Starting Over") in the hilariously awful screen singing club with her rendition of "Walk on By."

Also strong are Garity as the dopey but true blue driver. His practicing of special effects and stunt work provide some of the film's best visual jokes. In a small role as the gang's last sleepover victim, Peggy Miley ("A Little Princess") is a small, stout, senior firecracker of a bank manager. Willis' daughters Scout and Tallulah Belle are featured as the children of the first hostage.

Peyton's script is full of amusing dialogue and situations. When Terry and Kate are forced to take the last room at a hotel called the Pink Flamingo, which is overrun with a Mary Kay-like cosmetics convention, it at first seems like a one-off Elvis impersonator joke, but Peyton inventively takes it one step further. Production design (Victor Kempster, "Natural Born Killers") and cinematography (Dante Spinotti, "L.A. Confidential") take full advantage of the charming small towns of the Northwest coastal region. Levinson's direction keeps everything just right at left of center, although the film could have flown higher with some tightening, particularly in its early meanderings. The film features a terrific soundtrack ranging from U2's "Beautiful Day" to "Wildfire."

"Bandits" takes a while to find its groove, but once it does it'll steal its way into your heart.

Joe is an irresistible felon who, with a word and a smile, can melt any woman’s heart and just wants to enjoy life. Terry is a hypochondriac who is obsessed with his imaginary diseases and worries over every day-to-day detail. They seem like the unlikeliest team of bank robbers but, as they say, opposites attract and between the two of them they make the ideal man and crook. Joe, always one to shoot from the hip, breaks them out of prison in a daring, impromptu escape aboard a cement truck. The pair, on the lam now, talk about their future and decide that they will head down to Mexico where Joe’s uncle runs a struggling hotel. They figure that the can turn the place into a successful nightclub if only they can lay their hands the cash to do it. But, how to do it?

Terry, the smart one, comes up with a plan that is brilliant in its simplicity. Since their usual trade of robbing banks, with guns and guards abundant during a busy business day, is risky, to say the least, he devises a way to avoid getting shot and caught. The idea is, kidnap the bank manager, hold him/her hostage with the family overnight, have a nice dinner and sleepover, then go to the bank before it opens with the manager, collect all the cash and split. No fuss and no muss. They enlist Joe’s loyal young cousin, Harvey J. Pollard (Troy Garrity), to be their getaway driver, put the plan into action and, to Joe and Terry’s surprise, it all works! They split the loot and go their separate ways until the next heist.

Things go as planned for the next robbery, too, but after they separate, Terry’s car runs out of gas and, before he can get more and take off, the cops show up. He needs another set of wheels in a hurry and decides to carjack a ride. Enter Kate, a lonely, unhappy housewife whose husband pays her scant attention. Distraught after his latest bout of ignoring her, she takes her Mercedes for a spin to clear her head and, literally, runs into Terry. He is totally disoriented, thinks he has a concussion and makes the mistake of taking a ride with the hysterical Kate. He takes her to the “gang’s” hideout and, unless they shoot her and bury the body in the woods, Terry and Joe are stuck with haus frau. This isn’t a problem for Joe, who immediately takes a liking to the pretty housewife and she joins them in their spree. Things get complicated as Kate falls for both guys (and vice versa), which leads to a dramatic standoff with the police on their last, big job.

Levinson and screenwriter Harley Peyton, with their talented trio of stars, have succeeded in creating a modern day version of “Butch Cassidy and the Sundance Kid,” but with a twist. In this new millennium bank robbery western Kate replaces Etta Place (Katherine Ross) from the ’69 flick as the romantic interest, this time showing her love for both of her versions of Butch and Sundance. It is obvious from the beginning that the very different Joe and Terry, though flawed, do have their good points. Together they make the perfect man – strong, sensitive, intelligent and capable - and Kate refuses to choose between them. This makes “Bandits” a fine buddy/road/romantic comedy film that wears its non-violent larceny as a benevolent badge of honor.

Willis, Thornton and Blanchett are a solid triumvirate of actors who forgo the usual star power and work hard to be convincing as the characters the play. Bruce Willis is understated as the charismatic, action-oriented Joe and plays well as part of the ensemble instead of his usual focal star persona. His onscreen charm is obvious and he keeps it in part with his costars. Billy Bob Thornton, once again, shows his mettle as an experienced, convincing character actor. He puts a solid spin on his Terry, creating a nerdy, smart felon who, though a rampant hypochondriac, is able to survive life day by day. Cate Blanchett, once again, proves herself to be one of the finest actors in the business. The Australian is capable of playing any kind of character and is able to do an American accent that would make a native proud. The three actors display a chemistry that allows you to lose yourself in their interplay and believe them as real people.

Supporting cast is limited, mainly, to a funny, goofy performance by Troy Garrity as the none-too-bright Harvey. The newcomer portrays his character as what Joe says is “honest and follows good.” He doesn’t have the stomach for a direct part in the larceny but he is loyal and does what he can for his older cousin, Joe. What Harvey really wants is to be a movie stunt man and this career endeavor makes for some of the film’s best slapstick moments. The rest of the cast is there to fill the void around the stars and not much more. One exception is Peggy Miley as Mildred Kronenberg, a bank manager who is thrilled to be one of the Sleepover Bandits hostage victims but refuses to give the crooks a red cent, knowing that she will not be harmed in the least by her captors. Willis fans will note that two of the stars kids, Scout and Tallulah, appear as the daughters of one of the kidnapped bank bosses.

As one expects in a film by Levinson, techs are solid. Veteran lenser Dante Spinotti gives the film a cool, clean look and adjusts smoothly between the warmth of those intimate moments between the three principle and the almost clinical look of the heists. Costumes, by Gloria Gresham, is Oscar caliber as Joe and Terry (and, eventually, Kate) are clothed in funky, funny disguises that are more subtly funny than outrageous. Pop music plays a prominent part in the film, especially for Kate who’s a sap for sentimental tunes like “Walk on By” and “Just the Two of Us.”

“Bandits” is a little on the long side, clocking in at over two hours, and could have been trimmed of some of its fat, but that’s a relatively minor nitpick. All in all, I had a rip-roarin’ good time and liked the story about these amiable crooks.