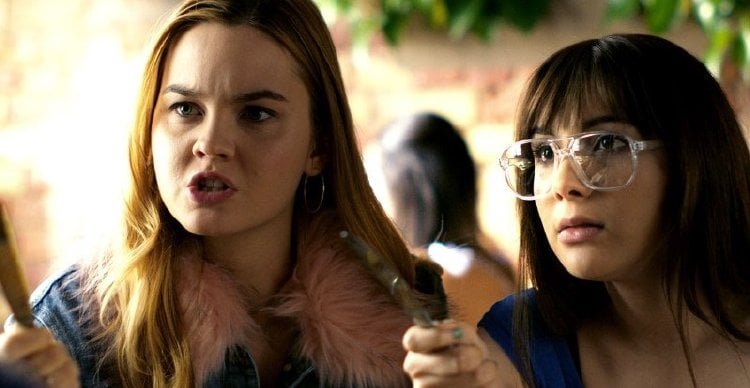 Two years after April (Hannah Marks) and her best friend Nick (Dylan Sprouse, "Big Daddy") decided to become more than friends, the end of high school presents its first obstacle when their college choices are on opposite coasts. A misunderstanding results in a breakup, leaving April bereft. Then she sees Nick with Clara (Liana Liberato, "If I Stay") on social media. But when the two collide at a summertime party, Clara extends an olive branch and the two women find themselves becoming fast friends – as long as they don’t discuss Nick – in “Banana Split.”

After cowriting and directing 2019’s “After Everything,” Marks reteams with that film’s screenwriter Joey Power while turning over helming reins to "Safety Not Guaranteed" cinematographer Benjamin Kasulke to take this film’s leading role. The twenty-six year-old’s ambition is impressive and while it is easy to see why this film is going the VOD route rather than theatrical, it is a cut above the usual teen romantic comedy, a workable combination of the fresh and the clichéd. The production impresses as well, especially in quickly paced, efficient early goings, before a few dialogue and camerawork timing issues introduce wobbles.

The entirety of April and Nick’s relationship-to-date is presented before the film’s opening credits, Marks and Sprouse’s easy charisma and in-joke intimacy making their couple not only real, but one to root for, the romcom’s earlier-than-usual obstacle a real surprise. So when April goes back on her plans for attending a party with friends Molly (Meagan Kimberly Smith) and Sally (Haley Ramm) and spots Clara, just as we know she would, we’re as shocked as anyone when the two end up performing a drunken duet of Junglepussy’s ‘Bling Bling,’ Clara later assuming comforting hair-holding duty as April retches.

Turns out, Clara, new in town, is a friend of Nick’s bestie Ben (Luke Spencer Roberts), the sidekick-with-the-funny-hat standard, now in the awkward position of knowing about the girls’ unlikely friendship when Nick does not. In fact, the two girls become so close, there is an underlying romantic element in the friendship, just like the one which kicked off the film. But while Nick spends most of the film’s midsection unseen except in April’s dreams, a mere mention of his name is enough to stop April and Clara dead in their tracks. So they adopt a set of rules, first and foremost of which is to never discuss him.

It helps that the dewy, dark Marks and naughty blond Liberato boast a chemistry almost as keen as Marks and Sprouse’s, both sets of relationships defined by quirky humor, the girls’ somewhat raunchier. Roberts may be saddled with the most clichéd role, but the actor makes it his own, a sidekick easy to see as lead material. Smaller roles are also well cast, “The Beguiled’s” Addison Riecke tart and smart as April’s sarcastic little sister, “Spider-Man: Far From Home’s” Jacob Batalon her boss with romantic aspirations of his own.

“Banana Split” keeps us guessing as to where it is going even as it lands right in the spot we’d expect. A little more experience behind the camera would afford that extra bit of polish, but that’s a mere quibble given the film’s strong cast and energetic filmmaking. “Banana Split” is a refreshing treat.

High schoolers on the cusp of graduation, April (Hannah Marks) and Nick (Dylan Sprouse) have been in love, love, love – first becoming the king and queen of necking and, soon, the reigning monarchs of sex. But, the good times come to an end and they break up. In none too much time, though, Nick has a new love in his life – Clara. April, of course, hates her new nemesis, until she gets to know her in “Banana Split.”

I did not know what I expected when sitting down to watch long-time-cinematographer-turned-director Benjamin Kasulke’s debut work. The title evoked images of the old, 1960s kids’ TV show about a rock band made up of four furry creatures in red fire helmets called “The Adventures of the Banana Splits.” This is not about those furry rockers.

What “Banana Split” is, though, is a story of the new, unlikely friendship between two teen girls that could, just maybe, last a lifetime. After April realizes that Clara is not her enemy, their closeness develops and they become BFFs – and keep it a secret from Nick.

What started out as a rivalry turns 180 degrees as April and Clara get to know each other. But there is a problem with this budding friendship – April still carries a torch for Nick. And, he for her. Will the new friends weather this storm?

The story, by Hannah Marks and Joey Power, is a coming of age yarn that garners two solid performances from its leads. April and Clara are very different types and it seems unlikely that they would ever become friends. But, their differences are the things that attract the two and the actors are convincing. Dylan Sprouse is likably charming as the girls’ object of affection.

One issue I take with “Banana Split” is the rampant use of booze and pot throughout the film. Maybe I am an old fogey - I am, by the way – but this did not ring true. But, then again, what do I know. I am not 17, not by a long shot.