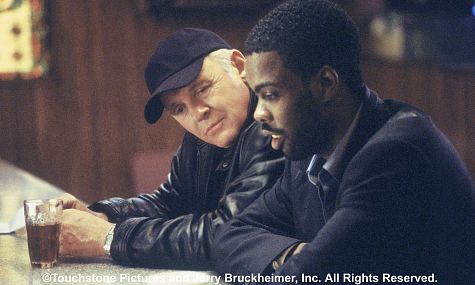 A suitcase-sized nuclear bomb is up for sale by a renegade Russian arms dealer and undercover CIA agent Kevin Pope (Chris Rock) has to get the device before fanatical Afghani terrorists can lay their hands on it. When Kevin is killed saving the life of his boss, Gaylord Oakes (Anthony Hopkins), the plan may be ruined. That is, until Oakes discovers, unbeknownst to his young partner, that there is a twin brother, Jake Hayes (Rock), and it is a race against the clock to recruit, train and put Jake into the jaws of danger in "Bad Company."

Just as CIA agents Oakes (Anthony Hopkins) and Pope (Chris Rock, "Nurse Betty") are on the verge of nabbing nuclear arms black marketer Adrik Vas (Peter Stormare, "Chocolat"), rival bidders kill Pope. The CIA uncover Pope's twin brother Jake Hayes (Rock), a Brooklyn ticket scalper and chess hustler about to lose girlfriend Julie (Kerry Washington, "Our Song") because of his lack of ambition. With only 8 days to be trained to masquerade as his unknown, sophisticated brother, Jake finds himself in "Bad Company."

While there's something intrinsically funny about Sir Anthony Hopkins saying 'Get in the car, bitch,' this Jerry Bruckheimer ("Armageddon") production has little else to offer. Not only is "Bad Company" the latest 9/11 delayed film to fail, it has the 'distinction' of featuring action involving a live nuclear device mere blocks from the then-present World Trade Center. Furthermore, while romantically pairing Lecter with Clarice in "Hannibal" made sense, putting him together here with the Senator's daughter (Brooke Smith, "The Silence of the Lambs") is a serious distraction.

After the standard training montage, which over milks Jake's late rising habits for laughs, the ghetto lad is poured into a thousand dollar suit with Manhattan digs to match. 'I think I'm gonna like being Mike Turner (Pope's cover as an antiques dealer),' he says, changing his brother's classical station over to loud rap.

Unlike the professional CIA chief of "The Sum of All Fears," here Oakes is up against Yates (John Slattery, "Traffic"), a miscalculating weasel who immediately puts the unsuspecting Jake in harms way. After extensive coaxing, including an appeal to his humanity, Oakes gets Jake back on board and they travel to a luxury hotel in Prague. 'I think I'm gonna like being Mike Turner," says Jake, this time surrounded by female manicurists.

After an unfunny comedic segment where Jake gets a surprise visit from his late brother's sexy CNN reporter girlfriend Nicole (Garcelle Beauvais-Nilon, "Double Take"), Oakes and Jake bond while a double cross becomes a triple cross that lands Jake's girlfriend Julie in the hands of Jugoslavian terrorists while a nuke counts down in Grand Central Station.

Jason Richman and Michael Browning's script is defined by its hoary 'twins separated at birth' conceit. This is the type of film where all secret ops are carried out at tourist attractions and five star hotels are shot up by automatic weapons unbeknownst to its staff and the local police. Rock is given a couple of funny bits, both involving outsmarting the CIA, but when he's put up against the real bad guys, he's forced to stall for time blathering about Dr. Dre and Wu Tang Clan as part of his expertise on nuclear weaponry.

"Bad" is how I felt when I walked out of this tedious, overly long spy thriller that had few thrills and nothing original to offer. Even the "climax" (involving "The Bomb") is cliché done countless times before - it's not a case of choosing between the red and blue wire, but pretty close. There is no soul to the by-the-numbers story that is like the chess pieces Rock's character Jake moves about the game board as he hustles his clients. We're being hustled here into thinking we're getting a poignant contemporary story about world terrorism, love and friendship. We're not.

This manipulative piece of celluloid junk is well made and obviously expensive, but junk nonetheless. The four credited writers (Gary Goodman and David Himmelstein for story, Jason Richman and Michael Browning for screenplay) appear to have formed the story line by committee and must have negotiated ideas until everyone agreed, sucking any life from the potential story. As such, any intrigue or excitement is stripped and lots of talking and Hollywood-conventional gunfights abound. (In true tinsel-town fashion, the bad guys have immense firepower but can't hit the side of a barn. The good guys, of course, can shoot the wings off a fly at 100 meters - with their eyes closed.) If I wore a watch, I would have been checking the time every ten minutes.

The tale that "Bad Company" tries to tell is the tried and not-so-true twins-separated-at-birth gimmick that intros Rock as a high-powered antique dealer, Michael Turner (one of three personas by Rock), living in Prague, Czech Republic. But, that's just a cover for CIA op Kevin Pope, who is in the midst of a tricky arms deal with Adrik Vas (Peter Stormare who, unfortunately, wasn't given enough time to chew the scenery, which may have helped things a bit). Pope is out to purchase a suitcase size nuclear bomb and brings in his "partner," Oakes, as the money man. The deal looks to be a done one until a gang of fanatic Afghani terrorists, also bidding for the bomb, decide to get rid of the competition and Kevin dies in a shoot out while protecting Oakes.

Now, with only nine days before the deal is finalized, Oakes has to come up with a plan. Conveniently, he discovers that Kevin has an identical twin brother, separated at birth, and the CIA honcho enlists the reluctant aide of street hustler Jake Hayes. In true Eliza Doolittle fashion Oakes transforms Jake from a seedy, down-on-his-luck street hustler (whose girlfriend is planning to move to Seattle for a new job and new life) into the suave, debonair, highly trained Kevin. Yada yada yada, they run around, shoot a lot of guns and travel between continents.

Sir Anthony Hopkins does it for the money, as far as I can tell, and goes through the motions of his character, Gaylord. The actor does do his own action work, to his credit, but you aren't going to see the great thesp do anything, well, great. Chris Rock has to play three separate characters and doesn't do any of them all that well. Jake is a subdued, broke guy losing his girlfriend, Julie (Kerry Washington), and is intelligent (we know that because, when we first meet him, he's playing chess in Washington Square). He has to become the brother he never knew, but is a fish out of water, especially when Michael Turner's sexy girlfriend, Nicole (Garcelle Beauvais-Nilon), comes on to him. Rock fares better when he is given a character that capitalizes on his fast-talking, smart-ass demeanor.

There is a strong supporting cast playing the CIA operatives working for Gaylord. Brooke Smith ("The Silence of the Lambs"), Gabriel Macht ("Behind Enemy Lines"), Daniel Sunjata and the rest are "The Fugitive" wannabes, but the writers don't bring the characters into the limelight. None of the actors is allowed to put any dimension on their roles as everyone is rushed from one location to another to brandish high-powered guns (mostly in plain view atop busy bridges and in hotels, but no one seems to notice) and wait and wait while Jake and Gaylord battle the bad guys and go after the bomb.

Joel Schumaher helms this high-priced fodder, produced by uber-mensch Jerry Bruckheimer, and the director has a great cast and crew at his fingertips. Lensing by Dariusz Wolski takes advantage of the beautiful Czech and NYC locales. Editing, by Mark Goldblatt, carefully shows us a New York without the WTC, a difficult task. Production design by Jan Roelfs capably handles the variety of locations. It's a shame that these and the rest of the able technicians and cast members didn't have a better story on which to ply their trades.

"Bad" is the operative word for "Bad Company," and I don't mean that in a good way.