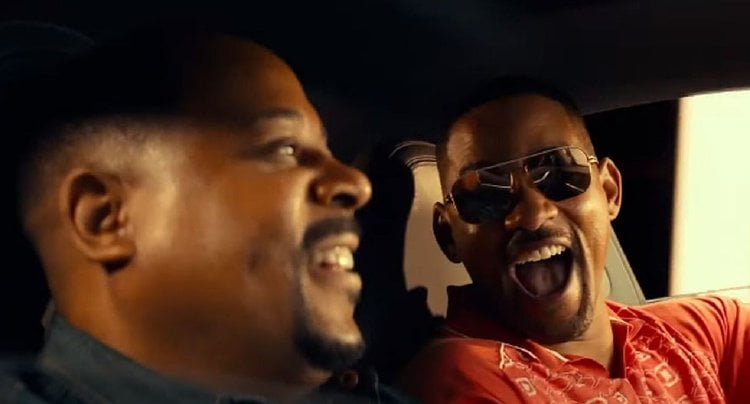 It took 8 years to make a sequel to 1995’s “Bad Boys.” Now, some 17 years later, is the third film in a series one must wonder if anyone was asking for. I wasn’t, yet found myself pleasantly surprised by this ‘late-est’ installment of the franchise (a 4th is indicated as ‘pre-production’ on IMDB). Belgian directors Adil El Arbi and Bilall Fallah take the reins from original director Michael Bay (who gives his blessing via a cameo as a wedding emcee) without missing a beat, adroitly balancing wild shoot-outs and chase scenes with character building and relationship intrigue.

The film begins with a nervous Marcus a passenger in Mike’s flashy new Porsche. After racing through the streets of Miami at hair-raising speed, we are amused by their destination – the hospital where Marcus’s daughter Megan (Bianca Bethune) has just given birth, rendering him a ‘Pop Pop’ and father intent on seeing his new namesake’s father make ‘an honest woman’ out of his daughter.

But trouble is brewing in a Mexican jail where Isabel Aretas (Kate del Castillo) viciously stabs a female guard in the laundry (the violence can be quite brutal), a swarm of fellow inmates masking the switch she makes to escape in an unlucky ambulance. Isabel practices the dark arts and she wants revenge for the death of her drug cartel overlord husband. She dispatches her son Armando (Jacob Scipio) to recover the millions his father buried beneath the sea and take out everyone involved with his conviction. That includes Mike and, for some reason, Armando is instructed to save him for last. Back in Miami, Captain Howard (Joe Pantoliano) is officiating a good-natured foot race between Mike and Marcus on Ocean Drive. When Mike pulls ahead, a man in black on a black motorbike fires several times. Mike drops and the assassin speeds away (earning Mama’s wrath for not following her instructions).

Of course one of our Bad Boys doesn’t die (although no one else is safe), nor can he be stopped from meddling in his own investigation, which becomes particularly hairy when he learns it’s been assigned to the new Advanced Miami Metro Operations (AMMO) team led by his ex-flame Rita (Paola Nunez), whose every walk by earns Mike a ‘dumbass’ from Marcus. After a D.A., forensics expert and judge are assassinated with the same type of bullet taken out of Mike, he pays a visit to butcher Manny (DJ Khaled) and violently extracts the name of its custom manufacturer, then turns Rita’s surveillance trip on the guy into a massacre.

Screenwriters Chris Bremner, Peter Craig and Joe Carnahan appear to tell us just why Mike’s been targeted, but there’s more than meets the eye here and the more we learn, the higher the stakes. But while many of the situations they’ve created are brutal, they leaven things with Smith and Lawrence’s odd couple banter, intensified by new babysitting duties and infringements upon Marcus’ wife, Theresa (Theresa Randle). Additionally, Mike is constantly skewered by AMMO’s Rafe (Charles Melton, TV’s ‘Riverdale’), who considers him a relic (the team also includes tart AMMO weapons specialist Kelly (Vanessa Hudgens) and pacifist AMMO technical expert Dorn (Alexander Ludwig)). Stunts include the motorcycle riding Mike’s endangering of his sidecar passenger Marcus and a couple of daring attempted helicopter escapes. The over the top climax is balanced by the film’s unexpected interpersonal dynamics (and a shot which somewhat mirrors Smith’s last effort, “Gemini Man”).

This may be the best thing Will Smith has been involved with in several years and while I used to loathe Martin Lawrence on screen, I found him quite appealing here. “Bad Boys for Life” is a welcome January surprise, Lowrey and Burnett a lot more fun to hang with than Hobbs and Shaw.