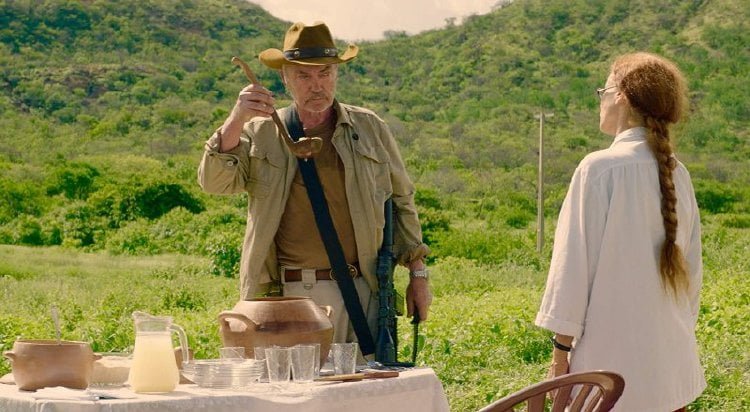 In a remote area of northeastern Brazil, Erivaldo (Rubens Santos) and Teresa (Bárbara Colen, "Aquarius") encounter a delivery of caskets overturned in an accident on the side of the road as they head for home in Erivaldo’s water tanker. Later they will find it shot full of holes when their small village, which they have recently discovered disappearing from maps, is visited by two suspicious tourists on trail bikes. External, colonial forces are building against this diverse population, but the group led by Michael (Udo Kier) has underestimated the denizens of “Bacurau.”

It takes a while to find our footing, the filmmakers plunking us down in the midst of the daily disadvantages facing Bacurau. Not only are they hauling their own water, a public utility under hostile guard, but reviled political candidate Tony Jr.’s (Thardelly Lima) ‘largess’ consists of books released from a dump truck, expired foodstuffs and medications intended to dull the senses. They have also just lost their matriarch, Carmelita, Teresa’s grandmother, at 94, her son, Plinio (Wilson Rabelo), stepping in to lead the tight knit community.

We begin to get a sense of a noose being tightened with the arrival of those trail bikers (Karine Teles, “The Second Mother,” and Antonio Saboia), their answers fooling no one, their disinterest in Bacurau’s museum the answer to a challenge (we deduce that most of the native inhabitants are descended from colonial slavery). A farmer reports having been followed by a drone that looked like an old sci-fi movie UFO (we hear its controller speaking in English as it hones in on him). Teresa’s man Pacote (Thomas Aquino) warns Flavio (Márcio Fecher) and Maciel (Val Junior) not to venture out, but they insist on checking in on an outlying farm. They find slaughter and have the misfortune of running into those trail bikers on their way back.

It is fully a third way into the film’s 131 minute run time that we meet Michael and the distinctly white, English speaking folk who’ve been honing in on Bacurau as they work to isolate it. Their biking scouts come under fire for having ‘stolen’ two of ‘their’ kills while also failing their racial purity test. Tired of Michael’s fastidious planning, Joshua (Brian Townes) informs the group ‘I came for the body count,’ but as fellow hunters Kate (Alli Willow) and Willy (Chris Doubek) soon find out, even Bacurau’s elderly outliers are prepared for their arrival. When the onslaught begins, residents have already cottoned onto the television show, ‘Trigger Killer Patrol,’ broadcasting their own demise.

The film’s Western elements are everywhere, from the sun-blasted terrain to a satirical serenading ‘cowboy’ to Leone style editing and plethora of coffins (not to mention the small town versus bad hombres). Bacurau is diversity itself, with several gay/drag characters including their much heralded savior Lunga (Silvero Pereira). “Aquarius” star Sonia Braga is almost unrecognizable as the town’s Doctor Domingas, fierce enough to earn even Michael’s respect. And Michael is perhaps the filmmakers’ most unique character, a white oppressor who becomes disgusted by the excesses of his own clients.

Several times, the ruthless hunters are asked ‘Why are you doing this?’ while they are quick to beg for help when their own lives are on the line. “Bacurau” may be a pungent critique of Brazilian politics, but in these days of global inequality it will be supremely satisfying for any in the overlooked majority to witness their day in the sun as they outwit the arrogant minority.

Teresa (Barbara Colen) returns home to her tiny village in the wild, arid north country of Brazil for her beloved granny’s, Carmelita (Lia de Itamaraca), funeral. She is shocked to find the place under a state of siege – the water supply is cut off, there is no cell service and a sinister isolation is gripping “Bacurau.”

I learned, after seeing this Brazilian “weird western,” that this is an actual film genre that combines the western with another genre, like noir, gangster, revenge, science-fiction, etc. “Bacurau” is certainly weird, a western – and more.

Co-directors/writers Juliano Dornelles and Kleber Mendonca Filho create an “in the near future” scenario that holds a lot of similarity to “The Hunt,” out earlier this year, about elitist bad guys using average folk as game. “Bacurau” is that but its story is far more complex and nuanced than the latter, lesser movie.

When Teresa arrives home, the villagers are in turmoil, mistrustful of everything and everyone – for good reason. There is a group of specialists sent into the area to exterminate every last one of the locals. But, there is a minor snag in this conspiracy – the locals will not go down without a fight and they know how to fight.

The mercenary bad guys, led by the deranged Michael (Udo Kier, chewing scenery as he does so well), who are bent on murder, though Michael a bit more than the rest. These bad guys are the tool of a corrupt government that wants Bacurau wiped off the map – which they have succeeded in doing on Google Maps. Now, they want to make it literal. The irresistible force meets the immovable object and how that turns out is the meat of “Bacurau.”

The filmmakers, with their weirdly weird western, are making some powerful statements about their native country and its ultraconservative and destructive, for the people, government. They do an excellent job making that point in an entertaining and thought-provoking way.