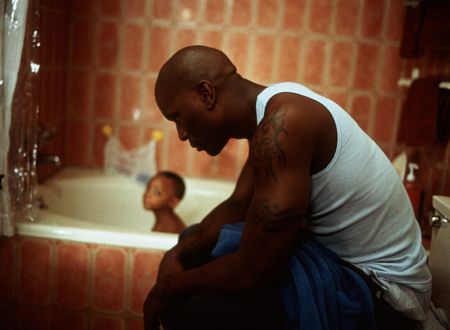 In 1991, 23-year old director John Singleton exploded on the movie scene with his insightful and unflinching look into the impact of violence on an inner city black family in "Boyz N the Hood, becoming the youngest helmer, ever, to receive an Oscar nomination. Now, he brings us back to the 'hood in a story about a young man facing the trials of becoming a responsible adult in "Baby Boy."

Jody (Tyrese Gibson) is a 20-year-old African-American who has fathered two children by two different women, yet still lives at the South Central home of his 36-year-old mother Juanita (A.J. Johnson, "The Inkwell").  Juanita is embarking on a new relationship with reformed old gangsta
Melvin (Ving Rhames, "Pulp Fiction") and wishes Jody would get a job, move out and become a man. So does Jody's current girl Yvette (Taraji P. Henson), the mother of his son, who has a steady job, car and place of her own. Producer/writer/director John Singleton examines the social
ramifications of Black men being brought up by single women in his companion piece to "Boyz in the Hood," "Baby Boy."

Singleton hits us over the head with his first image - Tyrese Gibson in a fetal position within the womb. Jody isn't really a bad kid, having resisted the pull of violence and being protective of his momma (although the latter impulse could be self-motivated), but he can't commit to a woman or stand on his own two feet. When he does decide to make money, he does so by stealing women's clothing and charming the ladies at a local hairdressing shop into buying. Jody's smart enough to consider what's said to him, though, unlike his homie Sweetpea (Omar Gooding, younger brother of Cuba) who presents an angry face to a world he believes owes him a living.

Jody's relationship with Melvin is a volcano waiting to erupt. He believes his mother's last boyfriend was the reason his younger brother was thrown out of the house and ended up dead. Jody becomes self-righteous over Melvin's past rather than acknowledging the man's present as the owner of a successful landscaping business. Jody also believes that his love for and honesty with
Yvette should make up for his dalliances and refusal to move in with her. When Yvette's former boyfriend Rodney (Snoop Dogg) gets out of jail, his decision to make her home his crash-pad is the catalyst for Jody's confrontation with adulthood.

Singleton's story about one young man finally denying the repetition of history is meandering and features a climatic moment straight out of the Hughes' "Menace II Society," yet its sloppiness can be forgiven for the truth and humor that permeates it. While Singleton's decision to include violence as part of Jody's crossing at first seems disappointing, the truth of the matter is that in this society violence can breed respect. The hopeful aspect here is that Jody normally rejects that route and Marvin has put it into his past (watch for Marvin's 'guns and butter' speech, a great piece of writing, not to mention advice).

All of his characters, with the exception of Rodney (Snoop Dogg's really oily in the role), are endearing as they struggle for their piece of happiness.  Singleton's directed one of the year's best ensemble casts. Recording artist and MTV veejay Tyrese Gibson delivers a star-making performance as the titular baby boy. A.J. Johnson should be considered as a Best Supporting
Actress nominee at year's end for her warm and funny young mom, a woman put into much the same position as Jody's put Yvette, who's now looking for a life of her own. The ever-great Ving Rhames is powerful as the bullish Marvin who turns out to have a lot to offer Jody once Jody lets him. (Rhames also gets some great laughs for a sexual move that Singleton's described as 'the African squat' and the surprise breakfast cooking scene which follows.) Taraji P. Henson is also fine as Yvette. Gibson and Henson have good chemistry as they vacillate between childish bickering and mature love.

The film's soundtrack features a diverse representation of Black music, including Snoop Dogg, Tyrese Gibson and Mr. Tan on the film's theme "Just a Baby Boy." All technical aspects of the film are top notch.

Singleton has maintained a theme on life in South Central LA since his auspicious debut film, followed by "Poetic Justice" and, now, "Baby Boy." The writer/director, following his smash hit, "Shaft" returns home, once again, and makes a personal statement on being black in America and the sub-culture that has produced a generation of boy/men whose adult actions, such as fathering illegitimate children, are coupled with the irresponsibility of youth. For generations, working class black society in the inner city has becoming increasingly matriarchal, with the mothers and girlfriends of these baby boys bearing the burden of their deeds.

Jody (Tyrese Gibson) is a streetwise, but misguided, 20-year old who has fathered two children by two different women, Yvette (Taraji P. Henson) and Peanut (Tamara Bass). But, he doesn't have a job, still lives with his mother and seems incapable of taking responsibility for himself or the babies he has made. He also has to contend with the volatility of his best friend Sweetpea (Omar Gooding), a young gang-banger who spends his life in and out of prison and in and out of trouble.

Meanwhile, Jody's 36-year old mother, Juanita (A.J. Johnson) is finding a new life for herself, a life that includes less and less her son and more and more her new boyfriend, Melvin (Ving Rhames), a reformed O.G. (old gangster). Mom wants to enjoy, finally, the simple things in her life, like her garden and her man. Jody is not part of this picture anymore and the boy resents it, especially the intrusion of Melvin as the man of the house. Jody is faced with more than just finding a place to stay as his past actions and inability to take responsibility for them force him to the crossroads of his life. Can he put aside his past mistakes and take control of his life, like Melvin? Or, is he simply going to let it slide and let the mammas take care of him and his babies?

Singleton has a lot to say on how he feels about the society that spawned him. For generations, now, the black man in the 'hood has allowed the women of his life to bear the brunt of being the sole parent and breadwinner in the home. Unemployment and crime, with its inherent dangers to life and limb, dominate the day-to-day life for black men and, if it continues unchecked, it will be irreversible. The writer/helmer makes a strong statement on the need for these boy/men to take control of their lives and, basically, do the right thing.

The script, by the helmer, is oftentimes hit-you-over-the-head as it preaches, repeatedly, the need for black men to take back their role of family patriarch and leader. Juanita's emphatic declaration to Jody that "you're not a baby no more" is both a plaintive plea and galvanizing demand by black women that they are tired of footing the entire load in raising a family. Singleton makes this statement, frequently, during the course of "Baby Boy" and this becomes a flaw that keeps the film from being a great one. A subtler approach to the pronouncement of the author's obvious deep feelings about the subject would have made the film more effective.

The strong ensemble cast is capably led by newcomer Tyrese Gibson (you might recognize him from his Guess? ads and MTV). He gives a solid, three-dimensional performance as the confused, but intelligent, Jody, effectively depicting the anger at being ejected from the safety of home in favor of Melvin and confusion about just how to become a man. A.J. Johnson, as his mom, puts a wonderful arc on her perf as a lady who has had enough. She has worked all of her adult life coping with the crime and the violence, which killed Jody's father years before, and raising a son to the best of her ability as a single, working mom. Johnson puts just the right spin on her mama who decides to cut the umbilical cord herself.

The rest of the supporting cast provides a wealth of talent. Ving Rhames has proven himself to be one of the most versatile character actors in the business. He can play comedy or drama and, here, he is both menacing - toward Jody, who rejects his friendly overtures - and loving, as a reformed O.G. who has turned his life around, started a business and fallen in love with Juanita. Rhames puts flesh and blood into the symbol of Singleton's idea of a good role model for the boys in the 'hood. Omar Gooding is first rate as the explosive, loyal Sweetpea and reps the life Jody must leave behind. Taraji P. Henson also stands out as Jody's main squeeze and mother of his second child. She represents well the fears and the hopes of a young woman and mother in the inner city. Snoop Dog is quite good as the sinister element, ex-con Rodney, but the character is unnecessary and a big distraction in the otherwise solid story.

Photography by Charles E. Mills captures the South Central locale well and, with stylish editing by Bruce Cannon, keeps the film visually entertaining. Costume, by Ruth Carter, is notable in that it does not call attention to itself in its natural flow. The frequent use of old Popeye cartoons (and Sweetpea) gives the "I am what I am" theme a humorous, retro feel that may be lost on younger auds, but is a nice weave in the film's tapestry.

More subtlety and some judicious cutting to trim the 2+ hour runtime would have made a better film, but I have to congratulate Singleton for his dedication to his race and his desire to put forth a positive message that young black men and women can be proud of.