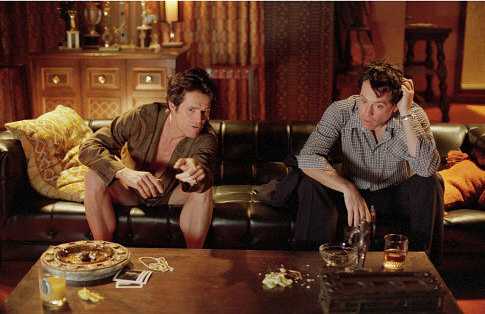 In 1978, Bob Crane, the star of TV's 'Hogan's Heroes,' was found bludgeoned to death in a Scottsdale, Arizona motel room. While never convicted, John 'Carpie' Carpenter, an early video equipment salesman and friend of Crane's, was almost certainly Crane's killer. Director Paul Schrader ("Affliction") delves into the mystery that led a Church-going family man into a world of home grown pornography in "Auto Focus."

Greg Kinnear ("We Were Soldiers") is perfectly cast as the bland, happy go lucky Crane, but while he deftly takes the role from wholesome youth to sleazy middle age he, and Schrader, never take us into Bob Crane's head. Still, "Auto Focus" works as an unusual biopic and document of male swingers in the Playboy era.

'Eddie Cantor once told me that likability is 90% of the battle,' observes Crane in voiceover as we witness the bland, wide-eyed DJ in a cherry red sweater show off his drumming skills to his listeners. He's concerned that that very quality will be tested when his agent Lenny (Ron Liebman, "Norma Rae") urges him to audition for the lead in a new sitcom about a Nazi prisoner of war camp, but even his wife (Rita Wilson, "The Runaway Bride") has to admit that the script's funny, and the role fits him like a glove. Crane butts heads with Richard Dawson (Michael Rodgers, "Thomas and the Magic Railroad"), offended by the Brit's debauched lifestyle, but he's intrigued by Dawson's buddy Carpie (Willem Dafoe, "Shadow of the Vampire"), a technical whiz who's just installed a snazzy hi fi system in Dawson's flashy sports car. Carpie's thrilled to be associated with such a big name, and soon he has Crane hooked on the novelty of the VTR, a black & white reel to reel video tape recorder.

Carpie gets Crane into a local strip club, which Crane is able to rationalize when the owner invites him on stage to play drums. But home movies of Crane's wife and kids soon turn to candid camera style sex when Carpie gets Crane and two willing ladies into his apartment and pours booze into the mix.

Michael Gerbosi's adaptation of the Robert Graysmith book "The Murder of Bob Crane" by suggests that Carpie wanted more than companionship from Crane and fed the man and ever increasing stream of women to maintain the relationship at any cost. Obsessed with watching his sexual exploits on tape (the two men call to mind Henry and Otis reliving their murders in "Henry: Portrait of a Serial Killer"), Crane's ego obscures everything around him. He believes the world exists to worship his sexual organ. The film's most powerful scene, where a washed up Crane makes lewd remarks to a buxom audience member during a televised cooking show, clearly demonstrates the man's total break with reality. When it finally dawns on him that Lenny's repeated warnings that his lifestyle is affecting his ability to get a job (Crane supported himself doing dinner theater in the 70s), Crane's attempt to break with Carpie brings his ultimate destruction.

Kinnear is solid as Crane, mutating boyish charm into oily sleaze. Dafoe is more effective, though, showing us what made Carpenter tick. He's part huckster, part desperate hanger-on, showing expansive largesse one moment, pleading the next. Also exceptional is Liebman as the disappointed onlooker always willing to give his client another chance. The film also features Maria Bello ("Permanent Midnight") as Crane's costar and second wife and Kurt Fuller doing a great Werner Klemperer impersonation.

"Auto Focus" is a fascinating tale, but Crane's blandness gives the film a curiously hollow heart.

As I watched the well-crafted bio on the life and still unresolved death of the beloved Colonel Hogan I wondered at just what demographic "Auto Focus" is aimed. The popular comedy series ran for six years from 1966 to 1971 and launched such oft-repeated lines like "I know nothing!" But, when the series ended, so did Crane's visibility in the entertainment industry until his brutal murder in 1979. Helmer Schrader and company seem to think there is still interest in Crane's life and death and adapted the Robert Graysmith book, The Murder of Bob Crane, to the big screen.

As someone who was a regular viewer of "Hogan's Heroes" when it aired in the late 60's, I have to admit I was intrigued to see the story of Crane's life and ultimate demise. When the actor was murdered way back when, there was national attention for a time but, as the investigation waned, so did public interest. Schrader rekindled my interest with the screen adaptation (by Michael Gerbosi) of Greysmith's book and has created a well made, though not great, look into Crane's self-destructive life.

When we first meet Bob Crane, he has been a successful DJ long transplanted to LA from the east coast. He had some modest success as a supporting character on the popular "Donna Reed Show" but when that series ended, so did Crane's acting career. He implores his agent, Lenny (Ron Leibman), to get him film roles and spark his acting career. Lenny, instead, gives his client a script for a comedy TV series about POWs in Germany during WW2. Crane disdains the offer until he and his wife, Anne (Rita Wilson), read the pilot script, think it's the best they've seen and he agrees to take on the role of the subversive Colonel Hogan. The show is a hit.

There are chinks, however, in the armor of Crane's life when, one day, Anne finds his stash of "art" magazines, nudie tomes such as Gent, that he has hidden away. Bob insists that they are just to pursue his photography hobby and have nothing to do with any desire to be with other women. Then, one day while on the studio lot, he has a chance encounter with Johnny Carpenter (Willem Dafoe), an audio tech who is installing a stereo system in the trailer of Crane's costar, Richard Dawson (Michael E. Rodgers). When Carpenter learns that Crane's passion is photography, the tech introduces the TV star to the wonders of the then-fledgling video media. Soon Johnny convinces the outwardly straight-laced Bob to join him at a local strip club where Crane can exercise his other passion, playing the drums.

As Crane delves into the sordid night life of LA with Johnny and learns that his fame will garner the attention of promiscuous women his life forever changes. Anne divorces him and takes their kids away while Bob plays with his newfound hobbies - sex and video. He and Carpenter form a union designed to feed his tastes and the actor enters a downward spiral that will ultimately ruin his career and more. Schrader examines Crane's decline with unblinking candor.

Greg Kinnear has never been a favorite of mine (with the exception of his dual role in the under rated "Nurse Betty"), but he gives an assured, convincing performance as Bob Crane. The genial, little boy quality of the character comes out completely and, despite Crane's sexual proclivity and failed marriages, is likable until the very end (in a sleazy way). Willem Dafoe does a first-rate job as Johnny Carpenter, a guy who has few, if any, redeeming values, but has remained weirdly loyal to Crane even as the actor fell from grace. Carpenter is almost desperate to maintain his friendship with Bob but eventually pushes his friend too far. Maria Bello benefits from her well-written character, Patty, who costarred with Crane on Hogan's Heroes, became his second wife and, like Anne, divorced him for his peccadilloes. Ron Leibman, as Lenny, is sympathetic to Crane's plight, tries his best to help his client but knows his advice falls on deaf ears. Rita Wilson has the unenviable job portraying Crane's loyal first wife who can't take her husband's many infidelities. The members of the "Hogan's Heroes" cast are suitably well chosen with Kurt Fuller faring best doing a fine impersonation of Werner Klemperer/Colonel Klink.

Schrader begins the story of Bob Crane's rise and fall with a palate of bright colors and a clean, crisp look that compliment the upbeat, successful life of the man known to many as Colonel Hogan. As Crane's life spirals uncontrollably down, veteran lenser Fred Murphy shifts from the bright and sunny look and stable camera work into a darkly hued, edgy look with shaky hand held camera to show the depths that the actor has sunk. Production design, by James Chinlund, utilizes vintage video gear as a centerpiece and device to show how far Crane's obsession with sex has taken him. (At one point, when confronted with his many assignations by Lenny at the behest of Disney Studios, Crane quips, "I don't drink and I don't smoke. Two out of three isn't bad." Hogan doesn't realize how far he has sunk.) Costumes, by Julie Weiss, hit the mark.

I'm still not sure at what audience "Auto Focus" is aimed. Its central character is enough of a niche interest that it won't garner mainstream attention and its biopic nature seems ill fitted for the art house crowd. It is a well-made movie, though, and does a decent job in showing the life of a man that can be considered an icon in his time.