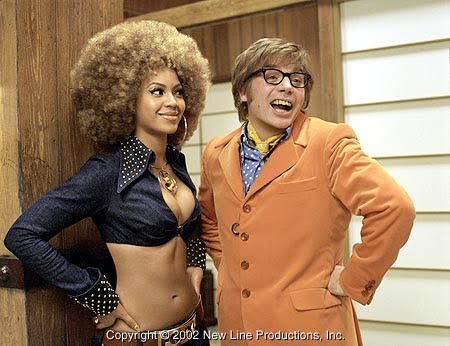 That swinging international man of mystery is back in a new adventure as Austin Powers (Mike Myers) must, once again, do battle with evil Dr. Evil (Myers) and his diminutive accomplice Mini-Me (Verne J. Troyer). This time the doctor uses time travel and a new henchman to kidnap Nigel Powers, Austin's father and England's most renowned spy. It's up to Austin and his old flame Foxxy Cleopatra (Beyonce Knowles) to save dad and stamp out Evil in "Austin Powers in Goldmember."

When Austin Powers' (Mike Myers) father Nigel (Michael Caine) is kidnapped, Austin's forced to make a deal with Dr. Evil (Mike Myers), moving him from a maximum security prison to the less secure facility where Mini Me (Verne Troyer) is being held. Dr. Evil points Austin towards 1975, where a new villain, Goldmember (Mike Myers) holds court over Studio 69. While Austin's back in time hooking up with his old flame Foxxy Cleopatra (Beyonce Knowles), Evil and Mini Me escape and connect with the Dutch Disco man to cook up a new plot to take over the world in "Austin Powers in Goldmember."

While it's lacking in the original's 'fish out of water' premise, "Austin Powers in Goldmember" is a spring back from the dismal "Spy Who Shagged Me," featuring the foxiest Powers' girl yet in Knowles. The star-crammed faux opening sequence is never topped, but the laughs mostly keep coming.

The third Austin Powers 'story' is pretty threadbare. What we have here is an examination of fathers, sons and sibling rivalry - squared and sideways. As Scotty Evil (Seth Green) continues to try and win his father's affections over Mini Me by presenting him with diabolical weapons ('You mean I have frickin' sharks with frickin' laser beams on their frickin' heads?' marvels Evil), so too does Austin try to win the respect of the world's most famous spy - his father Nigel. We're also treated to a flashback of Powers and Evil as boarding school roommates nailed by newcomers Aaron Himelstein and Josh Zuckerman.

Speaking of flashbacks, in this self aware comedy Dr. Evil uses the filmic device at will to make a point and characters also have fun and games with subtitles. The regular routines, such as women holding strategically placed melons, shadow puppet plays and prodigious peeing displays, are to be found as well.

For every few good gags (Mini Me in a baby snuggler, Britney Spears as a fembot, Hollywood's biggest director and female star doing crossover backflips into Austin's opening musical number), a clunker arrives. Goldmember (real name Van der Smut) is a double jointed Dutchman who lost his genitals in a smelting accident and replaced them with a solid gold replica. He eats his own sun-damaged skin as it flakes off. Not funny, although Nigel's Dutch barbs are amusing. Fat Bastard should also be retired. The character is simply disgusting, not even funny in the overworked gross-out comedy way. Fred Savage (TV's "The Wonder Years") is left adrift by the script as Number 3, a Mole with a prominent mole on his face. The Ozzy Osbourne cameo already feels shopworn.

Myers and cowriter Michael McCullers still produce some inspired moments, though. While I'm unclear as to how Austin could have history with a woman in 1975 when he was cryogenically frozen in the 60s, Foxxy's initial undercover communication with him, using Nathan Lane as a literal mouthpiece, is priceless. In the opening film which parodies Powers which parodies 60s spy flicks to begin with, a blond film star takes off a motorcycle helmet and introduces herself to Hollywood's biggest star as Dixie Normous. Myers also brilliantly turned around an on set visit by Today Show host Katie Couric into a cameo for her - as a unibrowed prison guard.

Production design is swinging from Austin's brightly colored pad near London's Millennium dome to Dr. Evil's new submarine which looks just like him. Costume and makeup are key as always. Frau Farbissina gets to tramp it up for a prison visit and Foxxy's wash and wear afro is fab. Music features Spears, Knowles and a fabulous prison rap by the doo ragged duo of Dr. Evil and Mini Me set to "It's a Hard Knock Life" from the musical "Annie."

"Austin Powers in Goldmember" would be a nice stopping point for the series, but I wouldn't bet on it. As long as Austin keeps his groove at this level, bring another on, baby.

After the uneven and sometimes just not funny second outing of the "Austin Powers" franchise, I had mixed feelings about seeing the third entry in the series. Whereas the original, "Austin Powers: International Man of Mystery," was goofy fun that didn't let a story get in the way of the gags, its sequel, "Austin Powers: The Spy Who Shagged Me," reversed matters. The follow up work lost sight of the attraction of its predecessor and attempted to build a story of the relationship between Austin and Felicity Shagwell (Heather Graham). This made for a long, boring middle stretch that was saved only by Dr. Evil's nefarious plans.

The third flick in the series, "Austin Powers in Goldmember," has, fortunately, more akin to the first than the second installment. Scripters Mike Myers and Michael McCullers pack the gags in and, aside from a sketchy yarn about Austin's kidnapped father, don't get lost in trying to tell a story. From the opening spoof with its bevy of celeb cameos (that's as much as I'll say about it) to the flashback to the beginnings of the rivalry between Austin and Dr. Evil to the revelations made in the finale the filmmakers are having fun.

While not given in the machine gun style of the "Airplane!" movies, the gags still come at a pretty brisk pace. Of course, the plethora of pee, poop, fart and other bathroom humor predominates as the Myer/McCullers comedy script seeks the lowest common denominator. As in the first "AP" flick, the jokes are sometimes carried to absurd lengths. This worked with Dr. Evil's extended maniacal laughs the first time around, but not so well this time, for example, when Austin fixates on Number Three's enormous mole. There are a few of these extended gags that fall flat. Things work much better with the quick and dirty jokes.

Myers is trying to rival the great Peter Sellars as he portrays four characters in "Austin Powers in Goldmember." The latest, the title character Goldmember, is a Dutch metallurgist with an obsession for gold. He's a quirky, weirdly accented guy whose presence is mainly standalone, not interacting with the rest of the cast. Fat Bastard is back, though I didn't care for him in "AP 2" (except for his desire to eat Mini-Me. Speaking of which, Mini-Me has a lot more to do here and, as such, is a much more likable character.) Dr. Evil is still one of my favorite bad guys and he is frickin' funny once again. The big surprise is Beyonce Knowles who gives a very confident debut perf as sexy spy, Foxxy.

Techs befit the budget with big sets, funky costumes and makeup - and laser beam shooting sharks. The surprises dished out in "Austin Powers: International Man of Mystery" and the freshness of the Bond spoof have gotten a bit stale this time, though the third time is the charm, especially when compared to "The Spy Who Shagged Me."

"Austin Powers in Goldmember" has the right stuff for silly summer entertainment and has enough laughs to sustain interest to the end. It is, however, a sequel.