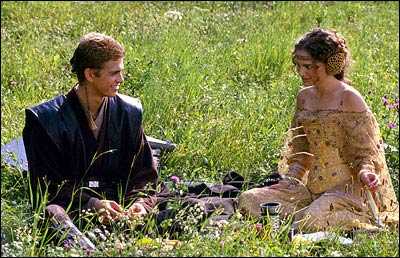 It's that season once again, about every three years, when the industry that is known as George Lucas spawns another installment in the never-ending saga that is "Star Wars." This time around, former queen, now senator, Padme Amidala (Natalie Portman) is the subject of an assassination attempt. She is put under the protection of Jedi knight Obi-wan Kenobi (Ewan McGregor) and knight-in-training Anakin Skywalker (Hayden Christensen) and they must travel the galaxy and fight evil in "Star Wars: Episode II: Attack of the Clones."

When former Queen, now Senator, Padme (Natalie Portman) arrives at Coruscant to vote on emergency powers for Supreme Chancellor Palpatine (Ian McDiarmid), she escapes an assassination attempt. She's put under the protection of Jedi Obi-Wan Kenobi (Ewan McGregor) and his protege Anakin Skywalker (Hayden Christensen, "Life As a House"). As the Republic is threatened by separatists, Obi-Wan travels to investigate the bounty hunter behind the attempt on Padme's life, leaving love-struck Anakin to accompany her back to her home planet Naboo in "Star Wars Episode II: Attack of the Clones."

All Executive producer/writer-director George Lucas appears to be capable of these days is producing enough fireworks in his last act to elicit hope in his audience that his next installment will be better than the one they've just watched. While marginally better than Episode I, "Attack of the Clones" delivers almost two full hours of boredom before coming to life in the final 30-odd of its 143 minute running time.

Kenobi has his hands full trying to train Anakin, an upstart who believes he's already more powerful than his master and that the Republic would be better served by a dictator. After dispatching the two lethal centipedes released into Padme's sleeping chamber in a second assassination attempt, Anakin and Obi-Wan give chase in a scene which resembles a low-rent "Blade Runner" crossed with "The Fifth Element." Obi-Wan is rightfully concerned when his young charge is assigned to protect Padme while he searches out Jango Fett (Temuera Morrison, "Once Were Warriors").

Old buddy Dex points Obi-Wan towards the planet of Camino, a waterlogged environment of perpetual rain and sea (and a nice change from Lucas' usual desert-scapes). He's greeted by two sylphlike aliens, who think he's come to take delivery of the clone army they've been growing for a decade per order of a Jedi Obi-Wan believes to have been dead since before that time. The soldiers have all been cloned from Jango, who in return only demanded one clone without genetic alteration - his son Boba. Leaving Boba with another father complex, Obi-Wan is captured by separatist leader and traitor Jedi, Count Dooku (Christopher Lee, "The Lord of the Rings: The Fellowship of the Rings").

Meanwhile, Anakin is being resisted by a weakening Padme, until he rashly takes her to Tatooine to rescue his mother Schmi (Pernilla August). When she dies in his arms he slaughters her captors and returns to tell Padme of his hatred for them as John Williams' Darth Vader theme swells. Then they're off to save Obi-Wan, and, as it turns out, the film.

Lucas' directs by lining up his actors and having them make monotone expository announcements. It is noteworthy that the most colorful character in Episode II is the CGI created Yoda. Even Jar Jar Binks is made somewhat interesting this time around by most amusingly being left in charge of Padme's vote when she's whisked off to Naboo. While McGregor fills out his Jedi robes with more confidence this time around, Lucas allows him no fun - even his tossed off "You'll be the death of me" to Ani is played more for portent than playfulness. All too frequently, there is an awareness that McGregor is acting to a bluescreen. Portman is a little less stiff in her second portrayal of Padme, allowed some action this time around, but is more effective fighting off creatures in a Coliseum than being half of what should be the all important love match. Hayden Christensen is a huge disappointment as Ani, a role that seems to belong to James Earl Jones only. He may be handsome, but he comes off as a petulant spoiled brat. Christopher Lee proves himself once again as a mythical villain. Samuel L. Jackson is stranded once again as Mace Windu. Jimmy Smits' Senator Bail Organa is apparently a Shakespearean extra.

Lucas and Jonathan Hales' screenplay is full of lame dialogue and bad jokes. Their idea of high hilarity is to have C3PO proclaim 'What a drag' as his head is towed through the dirt and their idea of wit is to name a character Liam (Liam Neeson appeared in Episode I). ILM's effects are frequently terrific, however. Although many matte shots are too pristine and fake looking, much of the CGI work is stunning. Jar Jar moves with a distinctive lope. We're given a subtle glimpse of the shapeshifting ability of Padme's assassin reflected on her ship's dome window. The fabulous coliseum sequence is an homage to Ray Harryhausen. Dooku's holographic blueprint for the Death Star recalls the original "Star Wars." The undulating folds of fabric seen as the female Caminan takes leave of Obi-Wan may be the single most fascinating element of the film.

Lucas has all his elements in place for an explosive finale when Anakin goes over to the dark side. However, "Episode I" set up this film for a dark love story that is never delivered.

I'm not even going to bother giving a summary of the story. Those who care know what it's about anyway. For those that don't know, pick up a magazine. Everything from Time to Entertainment to, probably, Playboy have the faces of Anakin, Padme, Yoda and the rest and copious coverage of every nuance of the making of, starring in and analysis of all aspects of "Clones."

For me, I wish I had a flashlight and a good book to wile away the hours that lead up to the expected top notch F/X. Lucas, with co-scripter Jonathan Hales, has cobbled together a pretty mundane story that takes far too long to get to the obvious point. Along the way, there is the unimaginative direction, wooden dialog and misused talent that is marginally better that "Episode 1." (I can't believe I gave that turkey a B+.)

Ewan McGregor does yeoman's work and tries his darnedest to inject some humor and life into Obi-wan but is hamstrung by the stilted script. Natalie Portman gets to do more action stuff but doesn't show any spark at all. Hayden Christensen, whom I liked in "Life As a House," is merely a petulant, demanding, spoiled little snot that you want to go over to the dark side - he's certainly a stick in the mud as a good guy. Please. (Note that ever time Anakin doesn't get his way, the sinister "Darth Vader Theme" plays over the scene. Samuel L. Jackson better be getting a good pay check out of this because he is not doing anything for his acting career. Christopher Lee fares best in another perf as an evil magi, Count Dooku. The best characters are the computer generated ones, especially Yoda and the rulers of the planet Camino - a race that is an elongated version of the well know Earthly image of an alien being.

"Episode II" is really just an excuse to make more money for George before we get to the real reason for this whole prequel series - to see Anakin become our beloved Darth Vader. Even I, not exactly a fan of Lucas or his movies, think that Vader is one of the great film villains of all times. "Episode III," I anticipate. For me, "Episode II" is superfluous and a waste of my time (mileage may differ for you) except for the spectacular effects.

There are good bits to this latest bit of George Lucas hokum, but they are all on the techie side and, with a few exceptions, it takes about 110 minutes to get to most of them. The fans will have their appetites whetted with a future (past? Oh, yeah. In a galaxy far, far away and all that crap) inner city space chase that is virtually a collision of "Blade Runner" and "The 5th Element." The last half hour is a terrific presentation of special F/X magic with a bigger than "Ben Hur" gladiatorial contest that abounds with wild and mean creatures that our heroes must thwart. Then there is the spectacle of the big battle (it is, after all, the attack of the clones) that will be the reason for repeat business from the SW fanatics out there.

One good thing about being a film critic is that I can get to see the blockbusters without dealing with the huge crowds, which there will be. The only question I have: Will it beat "Spider-Man's" boffo box office?

One final bit of advice to Mr. Lucas: George, hire a real director and good writers for the next installment, please.