A Time For Drunken Horses 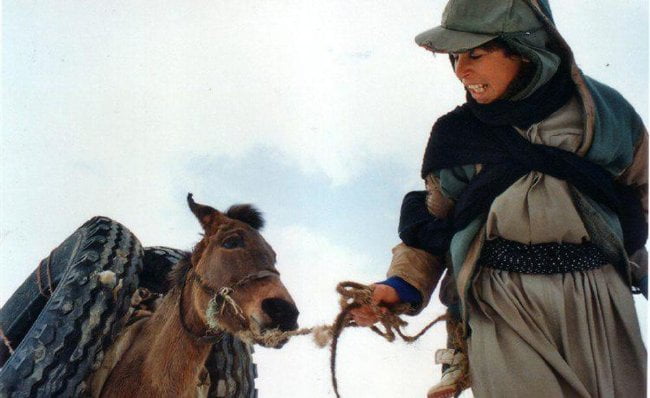 Five Kurdish children struggle to survive by picking up odd jobs in a distant town while their widower father is away earning a living smuggling over the Iran/Iraqi border. Madi (Mehdi Ekhtiar-Dini) is the eldest son, but he's severely handicapped so twelve year old Ayoub (Ayoub Ahmadi) bears the brunt of this responsibility while Rojin (Rojin Younessi), the eldest sister, acts as mother to the brood. Ameneh (Ameneh Ekhtiar-Dini), the middle child, helps both elder siblings, but mostly takes care of Madi. Then their father is returned home, dead from the landmines which pepper the landscape in first time director Bahman Ghobadi's Cannes Camera d'Or winner, "A Time for Drunken Horses."

The biggest, freshest surge in international cinema has been coming from Iran in recent years via the works of Abbas Kiarostami ("A Taste of Cherry"), Majid Majidi ("The Color of Paradise") and father/daughter directors Mohsen and Samira Makhmalbaf ("Gabbeh," "Blackboards"). Many of these films focus on children. Ghobadi's "A Time for Drunken Horses" is like a more harshly realistic counterpart to Majidi's lush and fable-like "The Color of Paradise." They have in common children of a widowed father who care for a handicapped sibling who proves to be a hindrance to a marriage. Ghobadi's film is distinct in that his characters are Kurds, an ethnic minority of twenty million who live in Iran, Iraq, Turkey and Syria.

When their father dies, their uncle declares Ayoub head of household because he's already burdened with eight children of his own. Madi's doctor tells Ayoub he needs an operation within four weeks to keep him alive for another 8 months. Ayoub begins the risky smuggling work that killed their father, where mules, laden with tires, are given alcohol so they won't feel the blistering cold crossing the snowy mountains over the Iraqi border. Ayoub's struggles maintain his family, but he's unsuccessful earning enough money for Madi's operation. (He does bring Madi the present of a picture. Ghobadi captures a brilliant image of the dwarfish Madi gazing upon a photograph of a body builder.)

Ayoub returns from one trip to find that Rajin has been betrothed by his uncle. Rajin explains to the distraught Ayoub, frustrated by his uncle's convenient return to head-of-household, that she's agreed to this because her new family will pay for Madi's operation, but on the wedding day, her new mother-in-law refuses to take Madi and offers a mule as recompense. Ayoub strikes out in a blizzard with Madi to sell the mule in Iraq to get his brother medical care.

Ghobadi returned to his Kurdistani village home, utilizing non-actors (and many relatives) to make this striking film. The four eldest children are all extremely natural in front of the camera, possessing strikingly expressive faces (Ameneh, in particular, has the face of an angel). These people have bleak lives with hardships unimaginable to western audiences. Something as basic as the procurement of an 'exercise book' (blank school notebook) is a treat to be savorred (we see this innocent merchandise and the truck which carried it impounded at a border patrol early in the film). However, the love among the siblings, which Ghobadi makes palpable, may seem rare to jaded western auds.

The film is shot in a realistic documentary style, yet contains images of stunning beauty, particularly when showing the harsh, wintery landscape. (When Ayoub and Madi are caught between two ambushes, they witness the other smugglers and their mules run down a snow covered hill into a valley, with the mules' former tire loads rolling willy-nilly alongside them.)

"A Time for Drunken Horses" projects love, spirit and hope. The ending, in particular, is simplicity itself in projecting triumph over extreme adversity.

Ayoub is a hard-working young boy who is responsible for the care and feeding of his brothers and sisters in a remote town near the Iran-Iraq border. Their mother is dead and their father, a smuggler, is away most of the time. When the local doctor tells them that their handicapped brother, Madi, will die without an operation, Ayoub, without much hope but with a lot of perseverance, tries to raise the money. His sister, Rojin, agrees to marry an Iraqi Kurd to get the needed operation, but this, too, fails, forcing Ayoub to even more desperate measures in the starkly beautiful film, "A Time for Drunken Horses."

Over the past several years Iranian films have been seeping out of that small country in a trickle that is, in reality, an emotional flood of beautiful, thought provoking films that rival the best of western films. A key element of many Iranian films, at least those we are fortunate to see here, is the role of children in those films. Internationally prominent Iranian filmmaker Abbas Kiarostami ("Where Is the Friend's Home?"), for years, had created films based on the growing child population in his country. This laid the path for others to follow in Iran's film community. In 1995, Jafar Panahi created the wonderful "White Balloon" about a little girl's quest to buy a lucky goldfish. Majid Majidi, in 1997, brought us "Children of Heaven," a story about a brother and sister who concoct an elaborate plan to hide the loss of a pair of shoes. He followed this up with this year's "The Color of Paradise," a simple but multi-layered story about a little blind boy and his father - this, in my mind, is one of the best, most visually stunning and emotionally satisfying films this year.

Newcomer writer/director Bahman Ghobadi continues exploring the plight of children in his rugged country with "A Time for Drunken Horses." The helmer delves into the darker side of childhood with his tale of Ayoub and his struggling, little family in the mountainous region of Kurdish Iran. Ayoub becomes the head of his family after they learn of the death of their smuggler father. On the heals of this shock comes word from the local doctor that Madi, Ayoub's ailing dwarf brother, will die without a crucial operation. Even with the surgery, little Madi may only live for 7 or 8 months. This matters not for the orphaned family and earning the money for the operation becomes the priority of them all. In the hard, desolate land of the border between Iran and Iraq, this is a near impossibility for the hard-pressed little boy. An arranged marriage for Ayoub's sister Rojin also fails to bring hope as her groom's mother reneges on the agreement to take care of Madi, too. Ayoub then faces his greatest challenge as he fights harsh conditions and the threat of ambush as he smuggles tires to earn the money for Madi. The film ends with this quest unfulfilled, but with an understanding of Ayoub and the rest.

Ghobadi treads on neo-realistic territory that filmmakers like Vittorio De Sica ("The Bicycle Thief") first explored in films coming out of the ravages of post-WW2 Europe. The Iranian filmmaker makes no effort to gloss over the hard life of the folks populating his story who accept their plight and privation. The poverty of his characters, according to the helmer, is not a condition; it is a way of life. The wonderful thing about "A Time of Drunken Horses" is that it doesn't just show the subjects' lives to the viewer, it involves us in them. One scene has Ayoub, Madi and little sister Ameneh, while running away from Iraqi border guards, stopping to give Madi his medicine. There is no water to take the pills, so the siblings show little Madi how to make spit to swallow them. I found myself unconsciously trying to make spit, too. This is involving filmmaking.

Though the story is simple and the film's budget minuscule, there is no lacking in artistry. The screenplay, by the helmer, grabs you early on and carries you through, emotionally, right to the end. Coupled with this involving story is the masterful cinematography by Sa'ed Nikzat who captures the stark beauty of the rugged Iranian countryside in lovingly composed shots that could second as a photo montage in a gallery. The utter simplicity of the filmmaking evinces an elegance that we do not see in American films, regardless of the budget. In "A Time for Drunken Horses," images and expressions speak volumes to the viewer.

Another remarkable thing in the films from Iran, at least the ones I've seen, is the capable use of non-actors and the marvelous performances the directors are able to garner from them all. Ayoub Ahmadi breaks your heart and impresses you with his resilience and love for his family. Watching the boy, it's hard to believe he's not a professional actor. Little Ameneh Ekhitar, as the younger sister, is yet another in the line of adorable little sisters that seems to be a staple of Iran's films. Most heart wrenching, though, is Mehdi Ekhitar as the diminutive little brother, Madi. The helplessness and need of the little boy is countered with the touching warmth and caring devotion of his siblings. You fear, while watching the film, that something bad will happen to him. The tension over Madi's fate is palpable.

It's hard to really describe a film like "A Time for Drunken Horses" to an audience used to the rapid-fire action and dialogue of Western film. The pleasure is in watching the story, and its strife, slowly and quietly unfolds as it draws you into the emotional complexity of the seemingly simple story. The best way, for the film buff, to experience this is to go see it.

The film is part of the Shooting Gallery's release schedule and will only be at the art houses for a couple of weeks, so catch it if you can.

Oh, yeah. The title refers to the horses and mules used by the smugglers to move contraband over the rugged mountains between Iran and Iraq. It's so cold for the poor animals, the smugglers mix alcohol with their water to make them docile while carrying the onerous loads in the dead of winter. It's a subtle, off-hand indictment of the cruelty these creatures must endure.