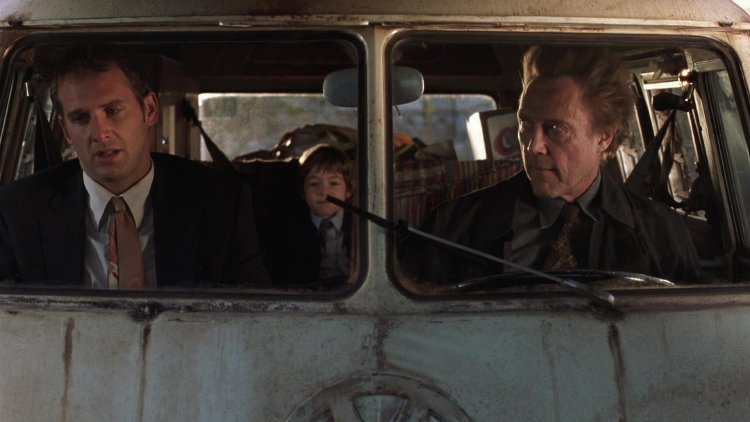 When his grandfather Henry's (Michael Caine, "The Statement") health goes into decline, Jason Lair (Josh Lucas, "Secondhand Lions," "Hulk") tries to contact his estranged father. Four years later, Turner (Christopher Walken, "The Stepford Wives") appears and Henry can finally rest. With greatgrandson Zach (Jonah Bobo) in tow, Henry goes to his favorite restaurant, Kentucky Fried Chicken, to compose a journey to heal the wounds between his son and grandson in "Around the Bend."

Disguising blatant product placement as indie film financing by hiding it in plain sight is only one of the sins committed by first time writer/director Jordan Roberts. From eccentric old codgers (Caine, too soon after a similar role in "Secondhand Lions") to undisclosed fatal illnesses, Roberts pulls at the heartstrings in the most cliched and commercial ways.

Archaeologist Henry studies funeral rituals in order to arrive at the right one for himself, then shuffles off this mortal coil, leaving his remains slumped in a booth at a KFC with a six-year old and a series of brown bags each holding post-it instructions. Jason, a dull bank clerk who has indulged grandpa all these years, dismisses his last wishes, but Turner, who has denied his dad for years, insists on following them. Three generations set off in a run down old van, visiting places meaningful to the Lair men's past, all of which are conveniently sited near a KFC (chicken eating is part of Henry's ritual for his heirs).

Quirkiness abounds. Henry's Danish live-in nurse, Katrina (Glenne Headly, "Confessions of a Teenage Drama Queen," in the most embarrassing performance of her career) watches gore exploitation films to relax. The boys begin their trip at their mother/grandmother's grave, leaving behind a turkey with extra mayo in a Glad sandwich bag. Turner saves a border collie from an abusive rancher (although the dog disappears for an extended period before reappearing at film's end). Zach connects with his granddad, joyously dancing in the glow of headlights.

It won't be any surprise where all of this is headed and, while telling this story may have been cathartic for the filmmaker, it's a journey taken once too often, expressed by far more experienced hands, for the audience. Cinematographer Michael Grady ("Wonderland") makes hay with southwestern sunsets, but the accompanying score ladles on the saccharine whimsy. Walken is never an unwelcome presence, but his Turner character is destined to be one of his least memorable. Lucas is merely reactive. Only young Bobo offers up something fresh and naturalistic.

Tyro screenwriter/director Roberts has made a competent film, but has nothing new to say and no particular style in which to say it.

Jason Lair (Josh Lucas) is a single parent raising his 7-year old son, Zach (Jonah Bobo), while caring for his aging grandfather, Henry (Michael Caine). Henry, a retired archaeologist, is nearing the end of his life and is obsessed with his funeral passage, refusing to be buried beneath the earth. When Jason’s long-estranged father, Turner (Christopher Walken), shows up, the younger man is less than happy but Henry is thrilled. The great grandfather, with his family now with him, concocts an elaborately planned funeral ritual that will span the American Southwest, then dies, leaving the remaining generations of Lair men to scatter his ashes to the winds in “Around the Bend.”

First-time helmer/scribe Jordan Roberts structures a heartfelt and earnest story of the four generations of the Lair family. Jonas, gimpy-legged since a child, faces the challenges of single fatherhood and in being a good grandson. His wife left him to bring up Zach while she headed off to Nepal (or, “Nipple,” as Zach calls it) to paint. Aging Henry has lived with them for quite a while and is nearing his own end. His archaeologist’s training has caused him to eschew the normal internment process for his fast-approaching death and he has created a labor- and journey-intensive funeral scheme that will take Turner, Jason and Zach on a far-flung adventure across the Southwest in a vintage, beat-up VW microbus – Henry’s prize possession.

Along the way, the three survivors of the Lair family settle old grudges and develop relationships anew. Per Henry’s instructions, contained in a Faberge egg-style collection of Kentucky Fried Chicken bags within bags, they must journey the vast American landscape. The elder Lair’s directives require that the trio have dinner at specified Kentucky Fried Chicken restaurants before scattering portions of Henry’s ashes at various locales along the way.

That pretty much sums up what “Around the Bend” is about. The novice script by Roberts is well polished and shows the writer’s affection for family. That the film stars Christopher Walken and Michael Caine, two icons of cinema, affords the story a level of character dimension that is more than it deserves. It is essentially an oddball road trip geared toward having the remaining Lairs bond and put aside their differences. The two veteran thesps give it their usual good shot, though Caine leaves the proceeds far too early, leaving Walken to shoulder the chore of carrying the film. Josh Lucas, unfortunately, is two dimensional, at best, as the one who has always had to carry the family burdens. He does this with a permanent grimace that doesn’t soften until near the end. Young Joshua Bobo is a likable little kid who gets some good lines without being overly precocious as Zach.

Tyro director Roberts benefits greatly from his senior actors and solid cinematography, by Michael Grady, that takes advantage of the vast expanses of the rugged American Southwest. The script merely puts the actors through their contrived paces as they move from one “burial” location to the next with ample product placement for KFC. (I wonder if Roberts was well paid for this copious advertising?) The proceeds look good, but the film lacks real emotional appeal.

Around the Bend” is the kind of film that would be best left to home rental or subscription TV but, truthfully, I don’t think I would seek it out in those venues. There is some nice familial bonding buried in there, somewhere, but it takes too much effort to dig it out.