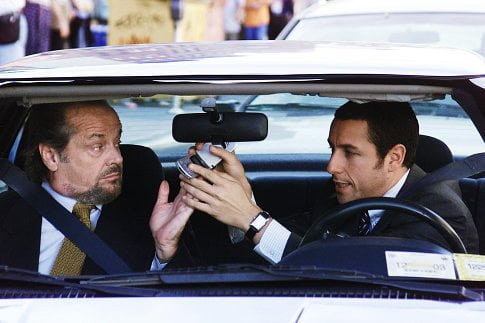 Mild-mannered Dave Buznik (Adam Sandler) has always let people push him around, even as a kid. Now, at age 35, he is little more than a go-fer for his rude, uncaring boss. When he has to take yet another last minute flight to be at his employer's beck and call, he is mistakenly accused of attacking a flight attendant and is sentenced by the court to curb his aggressive behavior. He finds himself in the hands of radical therapist Dr. Buddy Rydell (Jack Nicholson) who plans to teach Dave a bit about "Anger Management."

When meek Dave Buznik has to request a headset from a flight attendant multiple times, the incident is blown out of proportions by the airlines, which charges him with assault. Dave was only trying to placate his weird seatmate, Buddy, whose laughter at the in flight movie was keeping him awake. Imagine Dave's surprise when Buddy turns out to be a renowned doctor who persuades Judge Daniels (the late Lynne Thigpen in her last role) to sentence the accused to his program in "Anger Management."

Adam Sandler was baptized with critical praise last year for his performance as a bottled up businessman (repressed rage being Sandler's speciality) in Paul Thomas Anderson's "Punch-Drunk Love." Perhaps Sandler hoped to repeat that accomplishment with his own production team and a legendary Oscar-winning costar, but the formula doesn't work without Anderson's quirky style and Sandler ends up playing straight man to Nicholson's jubilant ham. "Anger Management" is "Punch-Drunk's" Barry Egan and "The Witches of Eastwick's" Daryl Van Horne thrown into a second-rate cross of "The Game" and a photo negative of "What About Bob?"

The film opens with a flashback explaining the discomfort Dave feels about kissing in public that bothers his girlfriend Linda (Marisa Tomei). His first kiss at a Brooklyn block party was ruined when nemesis bully Arnie Shankman pulled his shorts down to his ankles. Dave clearly worries but doesn't complain about Linda's ex, Andrew (Sandler regular Allen Covert), being her 'best friend,' nor does he stand up for himself at work, where his boss takes credit for his cat couture (overweight Tabby Meatball, named after Sandler's bull dog, is one of the film's funniest gags).

Dave presumes that Dr. Buddy Rydell recognizes the fact that he was unjustly accused and thinks he'll get a pass after attending one group session. Buddy's patients include the hilariously cast-against-type Luis Guzman as a flamboyant gay man with no real discernable anger problem, lesbian porno stars Stacy and Gina (Krista Allen and January Jones) who get too aggressive during 3-way sex, explosive Chuck (John Turturro, joining the Sandler troupe?) and a sports nut who flips out when the home team loses. Rydell pushes all of Dave's buttons, though, and when Dave barks back he finds himself in an intensive program that gains him a new roommate - Buddy.

Buddy orchestrates the type of madness that forcibly ejects Dave from his shell. In the film's best scene, he stops Dave's car on the Queensboro Bridge during morning rush hour and insists he do a duet of "I Feel Pretty" (Nicholson performs his singing part with relish). Celeb cameos proliferate throughout the film as Buddy gets Dave a date with transvestite Galaxia (a game Woody Harrelson), then sets up a most unusual come-on with barroom knockout Kendra (Heather Graham, surprisingly effective as a wacko). For the most part, though, "Anger Management" just lays there, with one gag after another falling flat. Lame toilet jokes, unrealistic situations (a Lexus parked in a Manhattan high-rise garage that consists of flat slabs with no guard rails?) and setups that can be seen a mile away sap the film's energy. The big ballpark finale is all wrong and cannot be saved by Rudy Giuliani delivering Rob Schneider's customary line.

The on screen talent (the film also features the ubiquitous John C. Reilly, Harry Dean Stanton, Kevin Nealon and a bunch of New York Yankees) is clearly undermined by director Peter Segal ("Nutty Professor II: The Klumps," "My Fellow Americans") who waffles when he should crack wise. "Anger Management" is a could have been, should have been that only kind of is.

On paper, this project must have looked like a match made in heaven. Adam Sandler, on the heels of his critically (if not popularly) acclaimed performance in "Punch-Drunk Love," seems like the perfect choice to play a man who has repressed his inner feelings since he was a child. Sandler can do the slow boil, with explosive results, like in "Happy Gilmore" and "The Water Boy," to sometimes amusing consequences. In "Anger Management," though, he plays the slow burn more akin to his Barry Egan in "Punch-Drunk," a more serious character than his norm. As such, he is really just a second banana to the shenanigans of Dr. Buddy.

The script, by newcomer David Dorfman, is an amusing premise that never really takes off, mainly due to Sandler's Buznik. There is nothing to his character that Sandler hasn't done before and better. The routine love interest with Linda (Marissa Tomei) is underlined with Dave's inability to show affection in public, stemming from a humiliating incident as a kid when he was about to have his first kiss. Linda is also being romantically pursued by her old college sweetheart, Andrew (Allen Covert), a snobbish, demeaning character who is there only to get his eventual just desserts.

The rest of the supporting cast are sound enough but fail to flesh out. Marissa Tomei has done very little to develop her career, at least in comedy, since winning the best supporting actress Oscar for "My Cousin Vinny" and seems to be here for the paycheck. Heather Graham plays her (uncredited) part as the sexy trap that Buddy sets for Dave. Woody Harrelson seems to be having the best time of all as transvestite hooker Galaxia This is the last performance for character actress Lynne Thigpen who plays the judge sentencing Dave to his own private hell. John C. Reilly plays a belligerent Buddhist monk with relish.

Helmer Peter Segal has a knack for silly comedy and that is mostly what we get with "Anger Management." Dorman's screenplay sets up a series of sequences that culminate in the film's surprise ending. Unfortunately, the idea of "Anger Management," which could have been a dark, amusing diatribe about our society, was left in the hands of jokesters. It makes me wonder what a better scribe and director could have done with the concept.