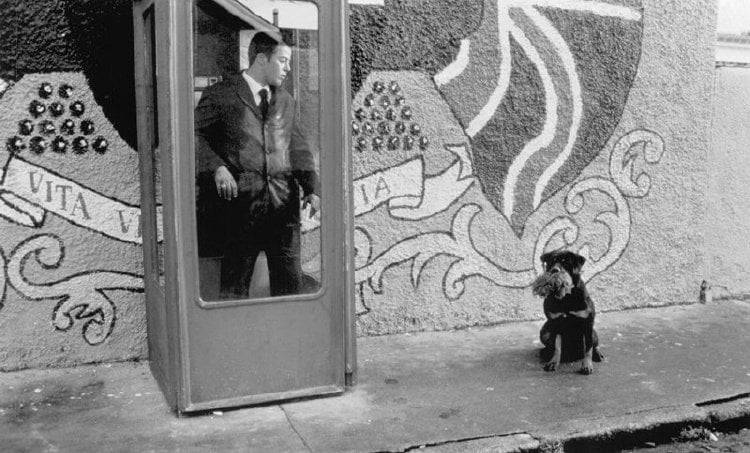 Colm O'Neill's (screenwriter Barry McEvoy) house sits at the crosshairs of the Catholic and Protestant neighborhoods of Belfast, hooded by a homemade firebomb protection. When Colm begins a new job as a barber at Ballylackey Mental Hospital, he finds a fast friend in Protestant poetry lover George (Brian F. O'Byrne, HBO's "Oz"). They're tipped off to a wide open market opportunity, when the owner (Billy Connelly, "Mrs. Brown") of the only men's hair piece company in Northern Ireland lands in their institution for scalping clients in director Barry Levinson's ("Diner") "An Everlasting Piece."

While "An Everlasting Piece" doesn't strain at the yoke to offer up twee Irish charm like this year's "Saving Grace," it's tale of rugs set against 'the troubles' that wears a bit thin overall.

Colm and George manage to convince 'the scalper' to hand over his list of clients to begin their new side endeavor. They immediately run into problems with their first client, Mr. Black (Des McAleer), who confuses their doorway sales pitch for a hair piece as a speachifying on herpes (the Irish poking fun at their own accents?). They sell him their sample after the initial confusion, but in their eagerness to make the sale, they take a check, which inevitably bounces. McEvoy strains his screenplay with a character that refuses to pay in order to get Colm to take the piece back by force, only to be chased by a group of Black's lads, then run down by a pack of dogs (did Black pack a steak under that piece or what?). Colm's been abandoned by George, who took off in their car after being accosted by an apparently released Scalper (a never more wasted Billy Connelly).

This is a film about the Irish conflict, so of course, the two get stopped on a lonely road by the IRA, one of whom buys that same dog-chewed hair piece. When the duo ends up being questioned by the police, Colm refuses to turn the IRA in. Conflict ensues between the two budding businessmen, who are also being challenged by the Toupee or Not Toupee company in a sales showdown.

"An Everlasting Piece" is a pleasant enough little comedy, but there were so many wrong moves which could have been avoided. Did McEvoy really believe that his audience would be amused to see Colm's mother appear with different styles of underwear on her head, ostensibly her 'eccentric' way of protecting her hairdo from her own cigarette smoke? Is he such a fan of The Talking Heads that he had to cut to inexplicable, gratuitous scenes of Colm and girlfriend Bronaugh (Anna Friel, "A Midsummer Night's Dream") in a movie theatre playing "Stop Making Sense?" Why is Colm's 'gesture' to save the business late in the film any less distasteful than what George has objected to in Colm's behavior?

Director Barry Levinson has a diverse roster of films behind him, but I must admit confusion as to what drew him to this small offbeat tale. While setting the Irish conflict against the rug trade is an inspired idea (based on the screenwriter's father's experiences), the telling dawdles and never quites finds its course.