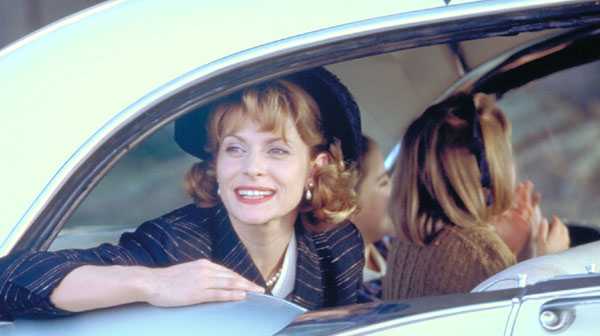 When Margit (Nastassja Kinski, "The Claim") and Peter (Tony Goldwyn, "The Sixth Day") flea from 1950s Hungary with their daughter Maria, their infant is supposed to follow, but grandmother Helen's (Agi Banfalvy) fears make her keep the baby behind. Heartbroken, the family continues on to America, while baby Suzanne is raised in the Hungarian countryside. Writer/director Eva Gardos tells her own story of a life between two families and countries in "An American Rhapsody."

Childless farming couple Jeno (Balazs Galko) and Teri (Zsuzsa Czinkoczi) give Suzanne (at 6, Kelly Endresz Banlaki) an idyllic peasant folk fairytale childhood. The child is happy and adored and doesn't comprehend the occasional gifts which arrive from the United States. Peter and Margit have worked hard and achieved a middle class home in California where Maria has become a typical American child. Margit toils at a letter writing campaign to have her daughter returned to her and finally realizes her dream. Suzanne is taken from the only parents she knows (who believe she'll be returned) and sent to America, where her arrival is a media event.

While Suzanne enjoys a good relationship with her father, she's at war with her 'new' mother. The teenage Suzanne (Scarlett Johansson, "Ghost World") sneaks out of her bedroom window to drive around with her boyfriend, drink and stay out all night. Mom installs bars on the windows and a lock on the door. Suzanne loads a rifle and shoots up the room. With the family in crisis, Peter fulfills an old promise to send Suzanne to Budapest, against Margit's wishes. The trip allows Suzanne to become whole and learn the secret her mother wished to protect her from.

"An American Rhapsody" is a personal story about the meaning of home and family. Suzanne's resentment at being left behind and torn from the people who raised her is met with overwhelming mother love from the woman who's dreamt of nothing but their reunion. Elder sister Maria, ironically, is the alien of the family, somewhat taken for granted and completely assimilated into the new culture. She drinks coke and slings the slang while her babushka wearing sister gets lost in a neighborhood of identical tract houses. While these early scenes are fascinating, due in large part to the sensational Banlaki, the later teenage years become wearying in their repetitiveness, with too many scenes of Margit standing in Suzanne's bedroom doorway while her daughter sulks. Gardos doesn't get the mother's point of view across well and lets important characters like sister Maria and Suzanne's boyfriend Paul all but disappear (in fact, the shooting scene begins with Paul at the window, but he's promptly forgotten, a jarring problem in such a climatic moment).

Kinski's fine as the overprotective mom, but Johansson fails to make us empathize. Goldwyn is surprisingly good as the even tempered, practical dad. The camera just loves Banlaki, and the film's at its best when she's on screen.

Hungarian cinematographer Elemer Ragalyi ("Jacob the Liar") shoots the early escape in a bluish black and white, letting full color bloom when the family arrives in the West. The film has a retro look, as if it was filmed in the time period the story takes place in, which is also complemented by the production (Alex Tavoularis, "Apocalypse Now") and costume design (Beatrix Aruno Pasztor, "The Wonder Boys").

Reminiscent of the equally uneven "The Man Who Cried," "An American Rhapsody" takes a bumpy road on its way home.

When the oppression of the Communist regime running 1950's Hungary proved too much, Margit (Nastassja Kinski) and Peter (Tony Goldwyn) take their eldest daughter and flee for the refuge of America. But, they are forced to leave their baby, Suzanne, behind to be raised by a kind, childless couple for six years until they can manage to bring the little girl here, too. Longtime film editor Eva Gardos takes the helm and tells her own story about coming to America in "An American Rhapsody."

Working from her own script, Gardos brings us back to a tumultuous time as the specter of communism descends upon the people of Central Europe, bringing to a halt the hopes of freedom that arose from the ashes of World War II. Book publisher Peter see the writing on the wall of Stalin's growing hegemony on his beloved Hungary and makes plans to spirit his family out of the country. His scheme go awry when he and his wife, Margit, are forced to leave baby Suzanne in the hands of the child's grandma, Helen (Agnes Banfalvy). Helen is soon arrested for her complicity in the couple's escape and Suzanne spends her formative years with Jeno (Balazs Galko) and Teri (Zsuzsa Czinkoczi) on an idyllic farm in the country.

Margit, in the meantime, has not forgotten her baby and lobbies untiringly to get her daughter back. She succeeds and, in a flurry of media attention, six-year old Suzanne (Kelly Endresz Banlaki) arrives on American soil. But, the little girl has only known Teri and Jeno as her parents and, while growing close to Peter, has never embraced Margit as her mother. The estrangement deepens when Suzanne reaches teen hood and the young girl rebels at the overprotective hand of her birth mother. Things come to a head when mom puts bars on her daughter's windows and an outside lock on her door. Suzanne calls in a promise made to her years before by Peter to go back to Hungary to the "parents" she loves. Margit, reluctantly, lets her daughter go. Once back "home" again, the young woman comes of age and realizes the importance and love of her real family.

I must laud Eva Gardos for her dedication in bringing her story to the screen. Her effort borders on amateur at times and the overall work comes across as something made-for-television, but there are some good things about it, too. The best little thing in "An American Rhapsody" is the charming performance by Kelly Endresz Banlaki as six-year-old Suzanne. The diminutive actress comes across as a real little girl who makes the best of being a stranger in a strange land. When, one day, she dresses in her Hungarian clothing and sets off to play, unknown to her parents, we see America through her innocent eyes.

Unfortunately, the story jumps ahead to teenage Suzanne (Scarlett Johansson), a selfish young woman who stays out all night, drinks and hangs out with her older boyfriend, much to Margit's despair. Johansson comes across more like a spoiled brat than a genuine young rebel. The tone of the film takes a down turn during this transition and the impact of Suzanne's revelations about life when she returns to Hungary is diminished. She sees her grandmother again and all of her teen angst and rejection of her mother is changed when she hears "the real story." It all wraps up neatly, but without much satisfaction.

The end of the Cold War opened up Eastern Europe to filmmakers and Gardos makes the best out of the lovely old city of Budapest. We get a travelogue presentation of the bridges and buildings that make up the city, but the nice scenery does not help the change in pace from the film's first half or draw you close to the older Suzanne. This part keeps the viewer at arm's length from characters and loses the involvement gained when watching the charismatic younger Suzanne.

The production has an artificial feel to it as the period touches - things like hula-hoops - are used to show the timeframes the film follows. I would have to watch again, but it seems that the attention to such details is less than accurate, bringing my mind to question the chronicle of events depicted.

"An American Rhapsody" is a heartfelt film and an obvious labor of love by Eva Gardos, but the story loses steam when it leaves little Suzanne's story, becoming a conventional coming of age tale, albeit one with Budapest as a backdrop.