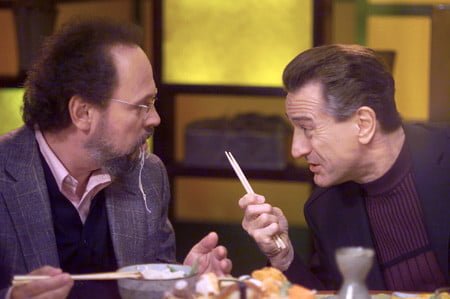 In 1999 Dr. Ben Sobol (Billy Crystal) had to deal with living in the professional shadow of his prominent psychiatrist father and treating his most controversial patient to date, mob boss Paul Vitti (Robert DeNiro). He survived both ordeals, but there are, now, still issues for Ben - his father has died and Vitti wants him to spring him from prison. Paul scams the authorities and gets Ben made into the "temporary federal institution" responsible for the care and feeding of the supposedly insane mobster in Harold Ramis's "Analyze That."

When I saw the first in what is now a potential franchise, "Analyze This," I reflected that I enjoyed a good episode of "The Sopranos" more than I did the often-silly fish-out-of-water story that made comical the Mafia underworld. Sure, there were gangland hits and guns galore, but it was all done with tongue-in-cheek humor with huggable mobsters doing cute, ultra violent things. That film's great box office success was bound to spawn a sequel and that is what we get with "Analyze That."

The two worlds of Ben Sobol and Paul Vitti collide once again when the mobster, now serving time in prison, calls his shrink at a particularly bad time - in the middle of Ben's father's funeral. Not a man who takes well to being hung up on, Paul devises a plan, after nearly being killed, to get sprung and appears to go crazy. The FBI recruits Ben to evaluate Vitti and he decides, after a rigorous battery of psychological tests, that the gangster is indeed insane. But, Paul is the key to the feds' plans to taking down a powerful Mafia leader and he is released into Ben's unwilling custody. Sobol's wife, Laura (Lisa Kudrow), is less than thrilled over having Vitti in her home, never mind that he lives there.

As Ben "rehabilitates" his patient he is also coping with the loss of his father and the conflicting issues he has always had with his dad. He begins to medicate himself while citing, "Grieving. It's a process" to cover the fact that he is not all that happy following in his father's shoes. Meanwhile, he continues to try to help Paul get over his own conflicts with his own late father. Ben also tries to point Vitti down the straight and narrow and calls in favors from family and friends to give Paul a legitimate job, without much success. First, Vitti takes a job selling luxury cars but his sales skills are lacking. "You could fit three bodies in that trunk" is not what potential clients want to hear. A stint as the greeter in a fancy restaurant also proves a disaster. When he takes a job in a posh jewelry store, temptation proves too much and he quits before he goes felonious.

An opportunity does arise that is custom tailored for Paul. A successful TV show about the mob called "Little Caesar" is looking for a technical consultant and Vitti fits the bill perfectly, or so it would seem. But Paul takes advantage of the situation and brings his former colleagues onto the set to help him "advise." While this is going on, Ben comes to the attention of Mafia don, Patty LoPresti (Cathy Moriarty-Gentile), who is using Paul as a pawn in her own plans for mob control. Patty encourages Ben to not cure his patient since Paul is more useful if still crazy.

"Analyze That" is a patched together pastiche of puns that requires that you suspend disbelief in order to even remotely accept the premises put forth. Sure, there are funny moments such as Paul, feigning insanity, starts singing tunes from "West Side Story" or when he mugs it up to convince prison authorities that he is mad. The problems stem from such events as Ben being made into a temporary federal institution by the FBI, a rather silly idea if you think it through. The manufactured script, by helmer Harold Ramis, Peter Steinfeld and Peter Tolan, follows the flow of the first film and relies, heavily, on the comic chemistry already developed between its stars. Techs are expectedly solid.

DeNiro and Crystal are obviously enjoying themselves and do a respectable and amusing job with their individual parts. Lisa Kudrow is underutilized as Ben's fed up wife, Laura, but does her best to flesh out her exasperated character. Joe Viterelli reprises his role as Paul's loyal right-hand man, Jelly, but is relegated to a background figure only. Cathy Moriarty, with her husky voice and cold-eyed stare, effectively portrays lady mobster, Patty. Anthony LaPaglia has fun in his cameo role as the star of "Little Caesar" as he mimics Vitti "to get into his character."

"Analyze That" is a no brainer and reps the opposite end of the film spectrum of the prestigious holiday films such as "Gangs of New York" and "LotR: The Two Towers." It is mildly entertaining and has a few laughs but that's about it.