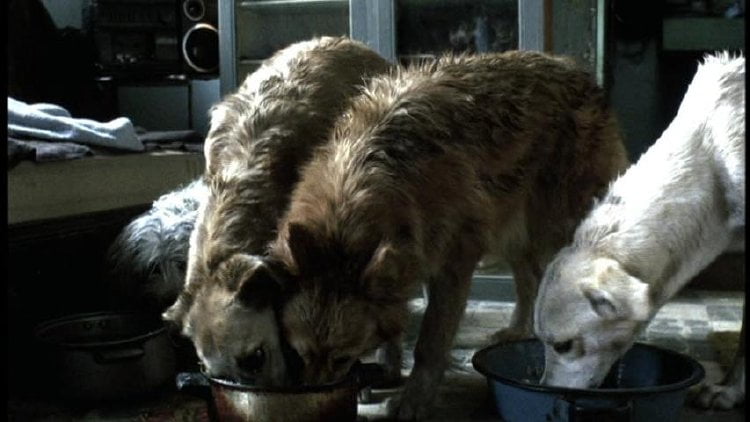 Charismatic Octavio (Gael Garcia Bernal) yearns to provide a better life for his sister-in-law Susana (Vanessa Bauch) than his abusive brother Ramiro (Marco Perez) so he begins to enter Ramiro's rottweiler Cofi in dogfights to earn their running away money. Magazine editor and family man Daniel surprises his lover, Spanish supermodel Valeria (Goya Toledo) (and her little dog Richie) with a new lovenest and news of his marital separation. El Chivo (Emilio Echevarria), a junk collecting ex-terrorist hitman, shadows the daughter who thinks he's dead waiting for the right moment to approach her. One tragic car crash at a Mexico City intersection provides a link among these three very different sets of people and their dogs in Mexico's Best Foreign Language Film nominee "Amores Perros" ("Love's a Bitch").

I'll be doggoned - this Mexican masterpiece is the feature film debut of both its director/producer Alejandro Gonzalez Inarritu and screenwriter Guillermo Arriaga. The film begins with Octavio at the wheel and buddy Jorge (Humberto Busto) riding shotgun as they're chased through city streets by a truck wielding a gun toting crazy. In the back seat lies a dog bleeding profusely. Just as it seems they've lost the tailing vehicle - smash! The filmmakers have grabbed our attention.

Decent guy Octavio is tender and flirtatious with Susana and her baby by his older brother Ramiro. Ramiro is crude and cruel, denying Susana money for basics like diapers, although he'll present her with gifts that are stolen goods. Meanwhile, Jarocho (Gustavo Sanchez Parra) swaggers out of the local dog fighting establishment with his ten-time winner and decides to let the dog work out his bloodlust on some strays - here we first meet El Chivo, who brandishes a machete to protect his brood of dogs. Instead Jarocho sics his dog on Cifo, loose because Susana inadvertently let him out. Cifo wins the street fight, giving Octavio a moneymaker for his dreams of running away with Susana.

We're also given seemingly random glimpses of a middle class man with his wife and two daughters. This is Daniel, who will soon abandon that family for the woman splashed across the city on Enchant perfume billboards. But Valeria is the occupant of the car Octavio runs into and suffers disfiguring wounds. Finally at home in a wheelchair, one leg encased in a steel frame, Valeria loses her beloved Richie under the floorboards of her and Daniel's new apartment (I could quibble about holes left uncovered in the floor, but I won't). The relationship strains the longer the pitiful dog's whines are heard without his rescue.

Finally, the ever present El Chivo is given center stage. He's a witness to the fateful car crash and rescues the ignored Cifo, whom paramedics have placed on the street. Cifo will teach the dehumanized El Chivo a shattering lesson that El Chivo will pass along to his latest client - and his mark.

In each story of this mesmerizing film, a person will suffer the same fate as his pet. Octavio's as likeable as Cifo, yet when Cifo is trained as a killer, Octavio goes too far to win his sister-in-law. Valeria and lhasa apso Richie are pretty and pampered pets dealt a terrible hand by fate. El Chivo protects his brood of street strays while earning his living killing, until he meets up with a dog with the same past. While the dogs gain our sympathy more easily, the humanity of novelist Arriaga's script shines through.

"Amores Perros" is a paradox in that it recalls many films while maintainly its own uniqueness. Kieslowski's "Trois Couleurs" are evoked by characters interweaving among three stories. In particular, "Red" is noted in the panicky transport of an injured dog and a huge fashion ad with a red background fluttering to the ground as a car speeds by. El Chivo plays "Long Cool Woman in a Red Dress" before toying with his kidnap victim recalling Michael Madsen's far more violent scene in Tarantino's "Reservoir Dogs." In keeping with the canine title references, the final shot brings to mind the post-apocalyptic world of 1975's sci-fi cult film "A Boy and His Dog."

The cast is uniformly good with Bernal's Octavio and Mexican icon Echevarria's El Chivo being the standouts. Bernal's mixture of trusting naivety and ruthless opportunism is given fire by the light shone into his otherworldly green eyes by cinematographer Rodrigo Prieto. Coated in grime, Echevarria projects a protective layer as tough as his overlong, yellowed nails, yet melts into paternal softness gazing at daughter Maru from afar or caring for an injured dog.

Director of Photography Prieto and Production Designer/Set Decorator Bridgitte Broch keep the film gritty looking in its first and third episodes, while delivering a slicker sheen for the more fashionable inhabitants of the second. Musical Supervisor Lynn Fainchtein delivers up a varied soundtrack that runs the gamut from the Hollies to something that sounds like techno mariachi. The film's animal trainer should also be noted for staging organized dog fights via the use of invisible muzzles which kept the dogs unharmed.

Dog fights, sibling rivalry for the same woman, a homeless hit man, a badly injured super model and a pooch lost beneath an apartment floor are just some of the stories that, quite literally, collide in the Mexican entry for Academy Award for best foreign film, "Amores Perros."

First-time feature filmmakers, director Alejandro Gonzalez Inarritu and screenwriter Guillermo Arriaga, have crafted an extraordinary flick that will remain one of the best come year's end. The film starts off at an immediately hyper-kinetic pace as two young men race away in a car pursued by a gun wielding pair in a pickup truck. On the back seat, a rottweiler bleeds profusely. As the chase speeds through the streets of Mexico City there is one near miss after another. Just when the driver (and you) thinks they are safe, he speeds through a red light and smashes into a car carrying a pretty woman and her dog.

The collision is the beginning of a three-story tale that flashes back and rolls forward as each of the stories is told. The first tale begins with the budding romantic triangle between Octavio (Gael Garcia Bernal) and his married brother, Ramiro (Marco Perez), and his wife Susana (Vanessa Bauche). Ramiro works in a drug super mart and supplements his income as a petty thief and robber. He is abusive to Susana, and Octavio, who has always secretly loved his sister-in-law, wants to take her away. An opportunity unexpectedly arises when their rottweiler, Cofi, runs out the door. Cofi is forced to defend himself from the killer dog of Jarocho, a small-time hood who is more vicious than any of his canines. Octavio uses his pet's killing ability to build up a nest egg for him and Susana. The result, we know from the beginning, will end in the violent crash.

The story shifts, smoothly, over to the victim in the car that Octavio smashed into. The woman, supermodel Valeria (Goya Toledo), has just moved in with her publisher boyfriend, Daniel (Alvaro Guerrero), who has left his wife of 20 years and their two children. Daniel thinks his life is set with his beautiful, trophy girlfriend. The crash changes anything. Valeria is severely injured, with her leg in especially bad shape with many pins holding the multiple breaks in place. As Valeria slowly and painfully recuperates, her photos and a huge billboard advert of herself outside her apartment constantly confront her - reminders of when she was healthy. She loses her modeling contracts and is further tormented when her little dog, Richie, crawls into a hole in the floor of their apartment and becomes lost. Valeria and Daniel's woes continue to compound.

At the scene of the crash, an older homeless man, El Chivo (Emilio Echevarria), sees the badly injured Cofi in Octavio's car. As police and EM techs work to save the hurt humans, he quietly takes the big dog back to his hovel and nurses him back to health. El Chivo, we soon find out, is not just a harmless bum as we join him on the hit of a prominent businessman. The old assassin has a past and now, after years in prison, he is on the streets, taking care of the stray dogs that he encounters. He thinks that Cofi is just and injured animal in need, but will soon find out the horrific truth.

"Amores Perros" is many things and shows influence from many different sources. Some critics are touting this marvelous Mexican film as a new "Pulp Fiction." This, I think, sells it far too short. There are structural similarities in the use of multiple stories that intertwine, even if the lives of the players are just passing each other like ships in the night. Helmer Inarritu and scripter Arriaga, with a talented cast and crew, have created an exceptional craftwork that is multi-layered in its comparisons, similes and metaphors. The double entendre title (it translates to "Love's a Bitch") reflects the nature of the film as dogs and humans are compared. The similarities of the behavior of dog and man are paralleled throughout the film with the main difference being that when man kills, it is for many reasons, not always honorable. The dog kills to survive.

Of the three stories told, though all are compelling, El Chivo's is the most dynamic and richly defined, mainly due to the amazing presence of Echevarria as The Goat. You learn that he has a violent past, but he surprises you as the layers of his life are stripped away for us to see what makes him tick. El Chivo's aging, handsome face says volumes in his expressions and the man, in a mostly solo perf, captivates the screen. The raw power of Echevarria performance overshadows the good perfs by the rest of the ensemble, but all are noteworthy and make all three stories thought provoking tomes.

The production is first rate on all levels. Director of photography, Rodrigo Prieto, gives each story a unique look, but with a flow that is not jarring to the eye. The Mexico City locale is made distinctive with the story focusing on the city's dogs, of which there are an estimated one million strays. Please note that the beginning of the film is emblazoned with the disclaimer that "No dogs were injured or abused in the making of this film." This is a good thing for the more squeamish American audiences.