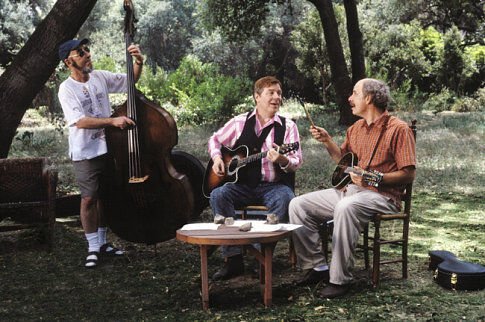 When Irving Steinbloom, a trailblazing folk music producer, passes on his son Jonathan (Bob Balaban, "Best in Show") sets about gathering his father's most famous acts, the Folksmen, the Main St. Singers and the long estranged Mitch and Mickey for a televised reunion concert at New York City's Town Hall.  Director/star Christopher Guest ("Waiting for Guffman," "Best in Show") and cowriter/star Eugene Levy ("Bringing Down the House") do for folk music what they did for small town theater and big city dog shows in "A Mighty Wind."

Guest, whose Folksmen cofound Alan Barrows sports a bald dome ringed with a bushy gray fringe (if hair is considered under the Academy's makeup rules, "A Mighty Wind" should be a strong nominee consideration), once again gathers his improvisational troupe to affectionately parody a subject. While "A Mighty Wind" is more even than Guest's "Best in Show," its humor is of a gentler variety.

We first meet the still performing Folksmen, a Kingston Trio-like bunch who also include Guest's former Spinal Tap colleagues, the brilliantly earnest Harry Shearer as cofounding bass fiddle player Mark Shubb and the sunnily vacant Michael McKean as guitarist Jerry Palter. These three dish about their first indie record label which produced LPs without the hole and a side business, the Three Wiseman Sex Emporium, sued over an incident with ben wa balls. These guys are determined to prove their uber-folkness over the Main St. Singers, a group they disparage as commercial tripe whenever possible.

The Main St. Singers, an ever evolving New Christy Minstrel type group, are fronted by Terry Bohner (John Michael Higgins, "Best in Show") and his controlling wife Laurie (Jane Lynch, "Best in Show") who sports a toothpaste smile while recounting her past as a porno actress who specialized in things the other girls wouldn't do. She's founded a silly cult of color that works its way into the Main Streeters' bright uniforms. Guest regular Parker Posey is also a member of the overly cheerful Singers who are managed by Fred Willard's Mike LaFontaine, a blonde spiked former child star who cannot stop himself from working his old tag line, "Wha' Happened?," into every interview and conversation. Willard, so inspired as "Best In Show's" announcer, is initially very funny, but runs out of steam in "A Mighty Wind."

The most drama revolves around the reunion of Mitch (Eugene Levy) and Mickey (Catherine O'Hara), a duo whose televised kiss during a song about love and rainbows has become as legendary as their falling out and Mitch's slide into musical retaliation and mental institutions. Mitch, played by Levy in flowing salt and pepper locks and goatee as a cross between Julia Sweeney's Pat character and Tiny Tim caught like a deer in headlights, tentatively falls right back in place with hesitantly sensitive Mickey plucking away at her Autoharp. Levy is comic genius here, a shell shocked self-proclaimed genius whose inner thoughts are a lot simpler than interpreted by his admirers. (Mickey's bland husband Leonard (Jim Piddock, "Best in Show") is made a model train enthusiastic, a nice ideal to give miniature visualization to the subject of so many folk tunes.)

The cast is rounded out by the likes of Ed Begley Jr. as a Swedish folk expert (?!), Michael Hitchcock as the exasperated manager of the Town Hall, Mary Gross as part of the folksy Klapper clan, Larry Miller as a talking head subject historian, and, most priceless of all in a tiny role, Jennifer Coolidge ("Legally Blonde") as an overripe, airheaded publicist with an accent of unknown origins.

Guest and Levy shape "A Might Wind" like a documentary, moving forward with scenes leading up to the big concert while flashing back via interviews to fill in their faux folk history. The music sounds like the real thing while the lyrics are loonily left of center. The film ends with a Peter, Paul and Mary gag that's more silly than sophisticated, but the players never stray from character and their force of good nature is overpoweringly winning.

When the legendary folk music promoter Irving Steinbloom passed away his son, Jonathan (Bob Balaban), decides that he must organize a fitting memorial for the great man. With only a two week window to stage the show at New York's The Town Hall, Jonathan hastily tries to bring together some of his dad's greatest acts - The Folksmen, The New Main Street Singers and Mitch & Mickey - for a final tribute in director Christopher Guest's mockumentary, "A Might Wind."

Guest and co-writer Eugene Levy have put together the fourth in the mock documentary series that has become a creative mainstay for the director and his stock company of favored actors. His first collaboration, with Michael McKeon and Harry Shearer, was the brilliant, funny satire "This Is Spinal Tap," chronicling the comedic struggles of the formerly famous title heavy metal band. This was followed by the charming, let's-put-on-a-play musical set in America's heartland in "Waiting for Guffman." In 2000, Guest and his talented ensemble brought a funny perspective to the behind-the-scenes of a big-league dog show, a la the Westchester Kennel Club, in "Best in Show." While all were funny, they also contained the glimmer of reality at their hearts.

"A Mighty Wind" delves into the world of the folk music of the 50's and 60's and Guest and company do a remarkable job in capturing the spirit and innocence of the music of those times. Older audiences, the main target for the film, will revel in the performers who hold much akin to The Kingston Trio, Peter, Paul and Mary and The New Christy Minstrels. The film is about the trials and tribulations that Jonathan Steinbloom and his sister, Naomi (Deborah Theaker), face in trying to put together their tribute to their father. Guest moves things on briskly with his many interviews of the various band members, music historians and those involved in the production as Steinbloom hunts down the players, gets the hall, convinces the Public Broadcasting Network (PBN, get it!) to air the event.

This is where Guest's creativity blossom. He is quite comfortable with the members of his not-so-little acting troupe and the result is something that is believable, funny, sometimes sad and always entertaining. The performers assembled for the homage are three-dimensional and very talented. There are The Folksmen (Guest, McKeon and Shearer), the musical trio that holds much in common with The Kingston Trio and Peter, Paul and Mary - you'll know what I mean when you see the movie. Their Americana piece "Ea a oe's (Eat at Joe's)" is as nicely rendered as any folk tune I've heard. The New Main Street Singers, the resurgence group that arose from the original The Main Street Singers, succeed in poking fun at The Christy Minstrels and their spawn while performing lively, toe tapping tunes.

"Mitch & Mickey" is the more serious aspect, though darkly funny, of this mocku as we are shown the performing pair in their heyday, when their shows ended with their signature song and a kiss. The couple stopped performing, Mickey (Catherine O'Hara) got married and Mitch (Levy) descended into a psychotic world where he produced such albums as "A Cry For Help" and "Calling It Quits." Levy does a terrific job in playing the troubled artist and really draws on your sympathy, even as you laugh. O'Hara is the perfect foil for Levy as Mickey and she shows her feelings and caring for her former partner. Their on stage performance is preceded by a bit of angst but culminates happily.

Guest and Levy weave a charming and thoughtful series of little stories as he delves into the lives of each band and the organizers, as the technicians get ready for the big show. Bob Balaban, as the naïf son trying to do the right thing for his father, elicits a warmly comic perf as he tries to control all aspects of the show that are, in fact, out of his control. The Folksmen are ably captured by their creators and all of their interplay feels real and true. The New Main Street Singers are led by two generations performers with Jane Lynch as the group's matriarch Laurie Bohner and Parker Posey as Sissy Knox, the younger lady in waiting who will, some day, take the reigns from Laurie.

Other supporting cast members are equally full bodied and funny. Jennifer Coolidge as Amber Cole, a bimbo PR flack, is outrageous with an inventively comical, unexplained accent and a dim-witted joie de vivre that makes her small role memorable. Ed Begley Jr., as a Swedish musicology expert Lars Olfen, is a riot as he intersperses Yiddish phrases throughout his analysis of the music. The rest of this huge ensemble gives a good showing, too.

As in "Waiting for Guffman" and "Best in Show," Guest and the behind the camera crew capture the essence of the folk music event. The production of the live television event is done in earnest and helps to lend "A Mighty Wind" a level of truth about human nature and a nostalgic look into a more innocent past.