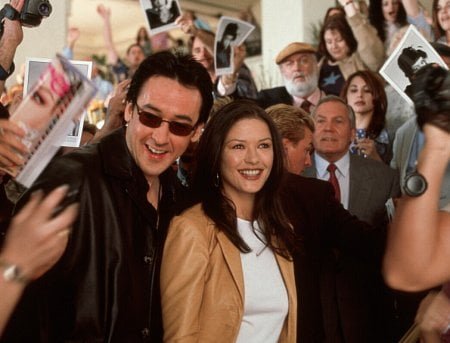 Gwen Harrison (Catherine Zeta-Jones) and Eddie Thomas (John Cusack) have been romantic idols to the American public for nine films. When their marriage broke up a year and a half ago, her career went down the tubes and he ended up as a patient at a California wellness clinic. Now, with their last film about to hit the street, PR maven Lee Phillips (Billy Crystal) is given the task of bringing the estranged couple together, with the help of Gwen's sister, Kiki (Julia Roberts), to save their careers and their film (and his job) in "America's Sweethearts."

Eddie Thomas (John Cusack) and Gwen Harrison (Catherine Zeta-Jones) were America's favorite Hollywood couple, appearing in one blockbuster after another together. But when they teamed up with genius filmmaker Hal Weidmann (Christopher Walken), Gwen began an affair with her Spanish supporting costar Hector (Hank Azaria, "The Birdcage") that drove Eddie into an asylum and Gwen off the box office charts. It's now up to Lee Phillips (Billy Crystal) to get the two together for the press junket of Weidmann's film in "America's Sweethearts."

Lee's not only dealing with warring costars - Weidmann is holding his film hostage and Lee has to keep the press preoccupied so they don't notice they're not seeing the movie. Lee puts the focus on the separated couple, leaking videotape of an apparently masturbating Eddie outside of Gwen's cottage followed by a picture of them canoodling in a car. This brings the jealous Hector out to the desert resort to beat Eddie senseless and provide more publicity. Meanwhile, Gwen's sister/assistant Kiki (Julia Roberts), who's shed sixty pounds since Gwen and Eddie's breakup, has consummated her long time crush on Eddie by falling into bed with him.

Writers Billy Crystal and Peter Tolan ("Analyze This") had a brilliant idea to anchor a screwball comedy, but while they sprinkle the script with several brilliant bits, their story begins to deflate just when it should be reaching its comic climax. They neglect to develop some characters, most notably Eddie, and their big moment, when Weidmann finally unspools his film, is painfully unfunny.

"America's Sweethearts'" all star cast, therefore, have varying degrees of success bringing this thing to life. Firstly, Julia Roberts must be given credit for creating the most human, audience empathetic, character in Kiki. Long subjected to the petty demands of her spoiled sister, Kiki soldiers on, coordinating hundreds of details lest Gwen encounter reality ('Is that the water with the electrolytes? I only drink water with the electrolytes.') Julia nails the film's best scene, where Kiki finally has her meltdown over a hungry man's breakfast, like the superstar pro she's become. Unfortunately, the flashback scenes which feature her in a fat suit merely make her look stiff.

Most comical of the film's cast is Catherine Zeta-Jones as the high maintenance movie diva. She wheedles and pouts until her supreme unalienable right to be the center of the universe is granted. In a hilarious bit, as Lee is convincing her to attend the junket, we see her Doberman attack a window washer outside, bringing the man to the ground, mauling him. When Lee informs her of this as the huge beast bounds into the room, she coos 'puppy!' obliviously.

The always dependable John Cusack tries to inject his considerable charm into Eddie Thomas. While he's marginally appealing, the character has been so neglected by the writers that he comes across shallowly. Hank Azaria starts off well, doing what appears to be a parody of Antonio Banderas, but his lisping, heavy accent gets wearisome quickly. Crystal's given himself many of his movie's best lines, but he barely breaks a sweat creating his PR guy. Christopher Walken's miscast as the Hal Ashby-like director who edits his films in the Unabomber's shack, which he's had transported to the grounds of his estate. Stanley Tucci is fine as the hand-wringing studio head beholden to Phillips after having fired him, while Seth Green disappears into the background as Lee's protege who was to have replaced him. Alan Arkin amusingly plays the 'Richard Libertini role' of Eddie's self help guru.

The Hyatt Regency Lake Las Vegas Resort is a good location choice for this glossy production, luxurious yet remote. Unfortunately, the cast careening around its grounds keep the audience remote more often than they allow them to luxuriate in classic comedy.

Screenwriters Crystal and Peter Tolan provide a modern romantic comedy that is set in the world of the Hollywood "press junket." The last film Gwen and Eddie did together is scheduled for its debut, but there are problems. The divorced couple, both of whose careers are currently in the toilet, need to make a show of reconciliation or lose their audience and a lot of money for the studio. Complicating matters, the director, Hal Weidmann (Christopher Walken doing a riff on real director, the late Hal Ashby), has taken the unfinished movie, named "Time Over Time," hostage and won't let anyone see it until the junket, not even studio head Dave Kingman (Stanley Tucci). Lee has to do the most difficult juggling of his public relations career to keep the press at bay and the stars conciliatory until Hal and his film arrive.

Meanwhile, Gwen's sister and assistant, Kiki, has quietly undergone a change since her sister's divorce. Since Eddie last saw her, right after the breakup, she has lost 60 pounds and is not just a nice person (unlike Gwen) she has turned from an ugly duckling into a beautiful swan. Eddie and Kiki have always been close and, now that he has been separated from Gwen for a while, he begins to see which sister really is the one for him. The conflicted romantic comedy continues until the big day when Hal finally delivers his film and shows it to the studio heads and the press. Then, all hell breaks loose.

I had high hopes for "America's Sweethearts" what with its stellar ensemble cast and all. Julia Roberts is actually developing into an actor and does a good job as the self-deprecating, loyal sister to the star. She maintains the nice-girl persona of the character throughout the film and, when the now-svelte Kiki binges out on a huge breakfast from frustration with the whole situation, she does it with vigor. Catherine Zeta-Jones, as Gwen, is dead on as the shallow, selfish prima donna - "People have no idea what it is like being me!" she whines - and is as unlikable as she is beautiful. Cusack does the bedraggled, obsessive actor with his usual goofy charm. Billy Crystal moves things along (and gives himself some of the funniest lines, especially when acting opposite a large Doberman), both as writer and performer and he does good PR shtick.

The problem that holds "America's Sweethearts" back is the completely telegraphed story. There is little doubt, for the viewer, as to who ends up with whom and how they get to where they are going. The actors play their parts well, but the two-dimensional machinations of the script prevent anything more than the obvious from happening so, by the end, you have the whole thing figured out. There is slapstick galore and one-liners abound - the Doberman gets to do the best visual gags in the film - but there isn't nothing' new here. A bright distraction, near the end, is Hal's presentation of his visionary film, changed from feature to documentary, much to the consternation of soon-to-be ex-studio boss Kingman. Alan Arkin gives a subtle, yet riotous, cameo as Eddie's wellness guide. He's supposed to be an Indian wise man, but he plays it so sharp he keeps you guessing if he's Eastern Indian or Native American.

Direction, by Joe Roth, is perfunctory and straightforward. He does it by the numbers as he walks his cast down the line to the films inevitable conclusion. Costuming, by Ellen Mirojnick (with Jeffrey Kurland responsible for wardrobing Miss Julia), meets the superstar criteria of elegance and, for Cusack, despondent seediness. Production design by Garreth Stover, especially the selection of the remote location of the Hyatt Regency Lake Las Vegas Resort, suits the Hollywood star mentality of "America's Sweethearts." The prods show the money is there and the tech staff uses it well.

A good cast and expensive production attributes can help a film but, without a solid screenplay to hang it all on, you can never attain greatness, whether it be comedy or drama. "America's Sweetheart" falls smack in the middle of this dilemma and suffers for it. It will draw a good size audience and will appeal to many with its good-natured pokes at the Hollywood star machine. But, it never rises beyond the level set by the routine, predictable screenplay.