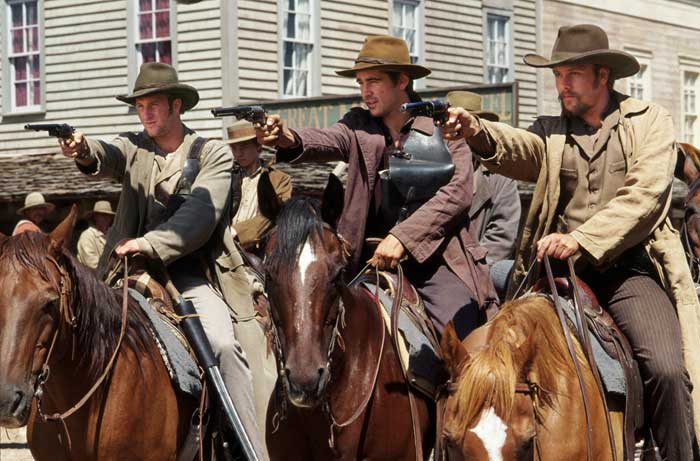 The Civil War has ended and the rebel troops have put down their guns and are heading home to the hoped for peace of their farms and former lives. But, in the town of Liberty, Missouri, Jesse James and his friends find that the head of the Rock Island Railroad, Thaddeus Rains (Harris Yulin), is buying up all the farms dirt cheap and it's up to the James-Younger Gang to put a stop to the robber baron's nefarious plans in "American Outlaws."

When Jesse (Colin Farrell, "Tigerland") and Frank James (Gabriel Macht, "The Adventures of Sebastian Cole") and Cole (Scott Caan, "Ready to Rumble") and Bob Younger (Will McCormack, "Boiler Room") return home as renegade soldiers from the wrong side of the Civil War, they immediately must face losing their farms to railroad expansion. Hot-tempered Cole kills two men defending his family and is sentenced to be hung, but Jesse James saves Cole while humiliating railroad baron Thaddeus Raines (Harris Yulin, "Rush Hour II") and his hired detective agency head Alan Pinkerton (Timothy Dalton, "License to Kill"). They retaliate by burning down peoples' homes, killing Jesse and Frank's Ma (Kathy Bates, "Misery") in the process. Jesse and his friends decide they need to go to war against the railroad and the James Gang is born in "American Outlaws."

"American Outlaws'" tagline of 'Bad is good again' couldn't be more apt - this is one flick that's so atrociously ridiculous it's entertaining, the classic bad good movie. Thankfully it has the sense not to take itself too seriously, although there are groaners a'plenty when it does.

Screenwriters Roderick Taylor (TV's "Wild Horses") and John Rogers (standup comic!) throw history out the window, give Jesse a comely, modern love interest in Zee (Ali Larter, "Legally Blonde") and turn their young guns into Robin Hoods. While some of the sparring is amusing, other dialogue is unintentionally gutbusting ('Don't turn around. If you don't see it, it's not real.')

Director Les Mayfield ("Blue Streak") maintains a fast pace and makes his cast look (mostly) good while showing no aptitude for creating a realistic Western (one central stunt is right out of "The Wild, Wild West"). Gabriel Macht has good screen presence as mediator Frank James, Scott Caan does the chipped shoulder well and Will McCormack provides some top notch comic relief. Colin Farrell, so highly praised for his work in the little seen "Tigerland," is the pretty, daring-do loverboy here, and proves himself capable of both a teen heartthrob turn and 'Matrix' era stunt work. Gregory Smith ("The Patriot") also acquits himself well as the younger Younger brother, who insists on riding with the gang. Kathy Bates plays Ma for yucks and gets them, even in her death scene (grossly mishandled by Mayfield). Timothy Dalton does a horrendous Sean Connery impersonation and Terry O'Quinn ("The Stepfather") mostly looks constipated. Ronny Cox acts cutely clueless as Zee's dad.

The outlaw has often been a folk hero for the masses at the very least since Robin Hood and his band of merry men roamed Sherwood Forest and thwarted the evil plans of the Sheriff of Nottingham around the time of the Crusades. In America's Old West, the name Jesse James was synonymous with popular desperado and has been the subject of no fewer than 23 different films since the 1921 silent flick, "Jesse James Under the Black Flag." Most of these movie treatments of the life of the notorious outlaw depict him as a Good Samaritan who robs from the evil rich, usually the railroads and their banks, and gives to the needy poor. "American Outlaw" forgoes any attempt to tell the true story of the James brothers and their gang, opting instead to adapt the "legend" in this latest telling of American history.

The film starts out with an exciting battlefield sequence at the very end of the American Civil War. A Confederate cavalry column is ambushed by superior, more heavily armed Yankee forces, but the brave rebels, in the persons of Jesse and Frank James (Colin Farrell and Gabriel Macht), Cole and Bob Younger (Scott Caan and Will McCormack) and trusted comrade Comanche Tom (Nathaniel Arcand) (and a few other Johnny Rebs) thwart the Yanks and win the battle, finding out, too late, that the war officially ended the day before. It is an exciting, noisy introduction to a bunch of good-looking, likable guys and sets the tone for the rest of the film.

As the war-weary soldiers head to the supposed safety and security of the Missouri homestead, they find that a blue-coat regiment has garrisoned their town and is trying to force the local folks to sell their farms to the railroad at far less than true value. One of the locals, who resisted the blatant attempt to take his land, is hanged as rebel and left in the town square as a reminder to Liberty that resistance to the will of railroad baron Rains is futile. Legions of Pinkerton detectives, led by Allan Pinkerton (Timothy Dalton), are brought in to reinforce the point.

Incensed by the murder of their friend, Jesse and the boys, supplemented by the Younger's little brother Jim (Gregory Smith), Clell Miller (Ty O'Neal) and Loni Packwood (Joe Stevens), decide that the railroad must be stopped. When Pinkerton's goons start burning down the homes of the obstinate farmers, they make the fatal mistake of blowing up the James homestead, killing Ma James (Kathy Baker) in the process. This is a major blunder by Mr. Rains and the James-Younger Gang declares war on the railroad, robbing his banks and disrupting his supply lines. Rains presses the reluctant Allan Pinkerton to bring his forces to bear on the outlaws in the David versus Goliath battle.

"American Outlaws" tag line, "bad is good again," should tell you something about the nature of the story. In this sanitized, politically correct telling of the James Gang legend all the outlaws are noble, kind and good. They are ruthless in dealing with Rains's henchmen, but careful not to involve innocents in their frequent gun battles with Pinkerton's private army, even in the middle of a bustling town. Scenes of the gallant young men giving large sums of stolen loot to the church or scattering dollars to the poor make you see that these are just good boys who are forced into a life of crime to protect their farms, families and selves.

But, what it is really all about is romance, intrigue, shootouts, horse chases, lots of things blowing up, revenge and justice. The clichéd, sometimes goofy, not often serious dialogue is an unusual plus for the film and helps string together the set action pieces, starting with the Civil War opening. There are bank robbery sequences, a cacophonous ambush, a grand train escape scene and more by way of action. There is also a stab at romance between Jesse and his childhood sweetheart, Zee Mimms (Ali Larter), in a move that holds homage to "Butch Cassidy and the Sundance Kid" with Zee a strong, supportive friend and true love (and, she is hell with a canon). Sure it's politically correct, but in a good, positive way. If the outlaws weren't always killing people and breaking the law, I'd have this nice bunch of guys and gal over for dinner.

The cast is uniformly personable with Irishman Colin Farrell first among equals as the pivotal character Jesse James. He displays humor, charm and wit and does a darn good job performing the tough stunts and horse riding. Scot Caan is solid as Cole Younger, the only rival to the charismatic Jesse. Gabriel Macht steals the screen as Frank James and puts a nice spin on his perf as the gang's "mother" and quiet wise man, as well as being the best shot. Will McCormack is endearing as Bob Younger, especially his hurt reaction when he sees how bad his wanted poster picture looks. The rest of the gang fits the bill and everyone worked and trained hard for their rolls. Vet thesps Dalton, Bates, Yulin, Ronny Cox and Terry O'Quinn give the air of maturity without spoiling the film's inherent youthful fun.

Production values are first rate with Russell Boyd's lensing providing a crystal clear image with fluid camera work that captures the action beautifully. Authentic-looking costume by Luke Reichle gives a hip, Old West look to the handsome cast, with a lot of individuality given to each player. Production designers Cary White and John Frick make the Wild West come alive with their recreation of frontier towns. The screenplay by Roderick Taylor and John Rogers is full of cliché but uses it to good affect, although some of the dialogue made me slap my head.

"American Outlaws" is good-hearted and good-natured fun that isn't going to bump anything off of the best western film list. It does entertain, it looks good and there is solid acting that could be star making. Finally, some good mainstream summer entertainment.