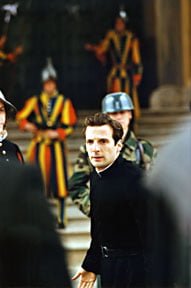 Kurt Gerstein (Ulrich Tukur) is a chemist who joined the notorious Nazi SS not for political reasons but because he thought that he could best serve his country in that uniform. His project on water purification, using a chemical called Zyklon-B, comes under the scrutiny of those responsible for Hitler's "Final Solution" and the idealistic lieutenant soon learns about the other application for the poisonous substance - to kill Jews and other undesirables in helmer Costa-Garvas's powerful film, "Amen."

Chemist Kurt Gerstein (Ulrich Tukur, "Solaris") offered his services to his country by developing Zyklon-B pellets as a method to purify drinking water for soldiers in the field. As a commissioned SS Lieutenant, Gerstein was ordered to step up his production and invited to a death camp to witness the new use found for his creation. Horrified by what he sees there, Gerstein attempted to find means to stops the Nazi atrocities, pursuing groups right up to the Vatican, but in the end all he was able to accomplish was written testimony that was to indict not only the orchestrators of the final solution, but himself, in director Costa-Gavras's "Amen."

The director of such hard-hitting political dramas as "Z" and "State of Siege" has had a spotty filmography since 1982's "Missing." Costa-Gavras returns to full potency with this masterful film, an examination of culpability as well as the biography of a little known figure whose story deserves to be told.

Costa-Gavras begins his film with the 1936 warning shot fired by Stefan Lux, a Jew, into his own head at the League of Nations. Then we see a sweet faced young girl smiling at a doctor, who returns her warm greeting, as she and other handicapped children are herded away by white-uniformed nurses to be disposed of with the exhaust fumes of the trucks which transported them. This girl is Gerstein's niece and it is at her funeral that he first hears rumors of the murder of 'unproductive citizens.' Gerstein doesn't really begin to accept the truth until the pervasiveness of Nazi doctrine visits his own home in the form of his daughter's homework - how many working class homes, which cost 15,000 Deutschmarks, can be built for the cost of one insane asylum at 6 million?

As Gerstein tries to escalate the horrific situation, to Swedish diplomats, his own Protestant Bishop (who informs him that he is tired of the whining of the Jews), his path crosses that of Riccardo Fontana (Mathiew Kassovitz, "La Haine"), a young, idealistic priest whose family has close ties to Pope Pius XII. The Vatican however, rejects the idea of listening to an SS officer and, afraid of Nazi occupation, delivers platitudes to Fontana, who makes his stand by adorning his cassock with the yellow Jewish star. Fontana, a fictional composite character, is sacrificed by his own, while Gerstein is indicted with his (it has never been determined if Gerstein hung himself at Nuremberg or was murdered by fellow officers). The film ends with an irony even more bitter to stomach.

Costa-Gavras uses restraint while building the desperation of his two protagonists. The killing of Jews is never seen on screen, yet everything we need to know is projected upon Gerstein's face as he looks through the peephole of a gas chamber. The Lieutenant's attempts to undermine the use of Zyklon-B backfire, making a ghastly situation worse. Trains are ever present, chugging inexorably across the landscape, livings being lost by tens of thousands a day as Gerstein and Fontana struggle fruitlessly. The director's artful touch is again evident when Gerstein's family celebration of Christmas hauntingly evokes the ritual of the gas chambers.

Tukur gives a profoundly moving performance as the unwitting enabler of mass murder. He invests his character with devout Christianity that is palpable in scenes with his family. His anguish and near disbelief in the death camp scene give it as much power as if we had witnessed what his eyes had. Kassovitz gives a quieter performance, yet his sorrowful rejection of the Church's decision to act for its own preservation in lieu of its teachings has a powerful strength. Ulriche Muhe is knife blade cold in his evil rationalizations as "the doctor," leader of the Nazi officers tasked with implementing the final solution. Marcel Iures creates a cocoon of whispered dogma to protect Pope Pius from condemnation.

Cinematographer Patrick Blossier creates rich, beautifully composed images for Costa-Gavras and cowriter Jean-Claude Grumberg's vision. The Vatican is seen from an overhead shot of a spiraling staircase amidst opulent architecture, like a Nautilus shell protecting it from outside forces. Later in the film, Gerstein travels with "The Doctor" past mass graves being burned to destroy evidence from approaching enemies - it's a hellish image.

There have been many, many films about the Holocaust and some might even suggest the subject has been overworked. Quite surprising, then, to find that two of the topics best and most unusual films, Polanski's unsentimental tale of a Warsaw ghetto survivor and now Costa-Gavras's tale of two insiders to the crime's complicity, should arrive a scant few months apart.

Gerstein is outraged by the turn of events as his superiors assign him to supply the death camps with sufficient quantities of the deadly chemical to destroy "11 to 12 million units by 1948." (In one of the film's most stunning and gut wrenching scenes, Gerstein is shown, in a staged demonstration, what the effect the gas has on the test "units" it is used on. The scene is near silent as the shocked lieutenant sees, through a view port, the horror that will soon become the routine of the concentration camps.) This terrible knowledge forces Gerstein to find any allies within Germany to put an end to the extermination machine.

Gerstein seeks the aid of civilian community leaders to end the atrocities but his pleas fall on deaf ears. He then asks members of the Protestant clergy to intervene but is told that his story would not be believed. When he approaches the head of the Catholic Church in Germany, a cardinal, his fears over the murder of millions is brushed aside with "We've become accustomed to the Jews' endless moaning." A young priest, Father Riccardo Fontana, whose father is a highly placed influence in the Vatican, heeds the German's warning of the looming horror and tries to use his influence to get a papal decree denouncing the atrocities. The Pontiff refuses, not wanting to raise the ire of the Nazis or risk their occupation of the Vatican. Gerstein and Father Fontana continue to seek support for their lost cause.

Based on true events, Costa-Gavras and Jean-Claude Grumberg adapt the play "Der Stellvertreter" (The Deputy) by Rolf Hochhuth, focusing on the real life Kurt Gerstein as the unwitting participant in the mass murders that would become known as the Holocaust. His expertise in the manufacture and dispersal of the dread Zyklon-B makes him the perfect candidate to supply the Reich with the necessary amounts of the poison to fulfill their goal to free Nazi-occupied Europe of the yoke of the Jews. His utter revulsion to the killing forces him to seek some official reproach to stop the escalating death toll. When Father Fontana (a character that is an amalgamation of all the priests who stood up against the Nazi killers) takes up Gerstein's banner, it looks like the young priest may be able to get the cooperation of the Pope, himself. History tells us, though, that this is not to be.

Costa-Gavras takes a black-and-white approach to the events that are depicted in "Amen." He stays true to Gerstein's story but takes some liberties in telling of the involvement, or lack thereof, by the Vatican in protesting the death camps. The filmmaker shows, with the personification of Father Fontana, that the clergy within the Catholic Church shared Gerstein's loathing for the Nazi atrocities. But, he also walks a fine line in denouncing the Church leadership for its failure to overtly castigate the Germans for their genocidal deeds. The Vatican, privately, abhorred the Nazi policy, but Costa-Gavras sets the expectation that more, much more, should have been done by the Catholic leadership at the time to protest the Nazi policy.

One of the main draws for "Amen" is the outstanding performance, among others, by Ulrich Tukur. I had only seen the actor in the recent rendition of "Solaris" (in which he gave a notable perf in a small role) and was bowled over by the intensity and passion he gives to Kurt Gerstein. Although thoroughly repulsed by the murderous intent of the Nazis, Gerstein stayed in the SS in order to be an eyewitness to the events. The actor gives his character depth, dimension and humanity as a man torn between his duty to his country and the moral indignation over the deeds of his leaders.

Mathieu Kassovitz also does a fine job as the young, dedicated priest who understands Gerstein and takes hold of the German soldier's humane cause. Father Fontana uses all of his considerable influence within the Church, due to his father's position, to change Vatican policy in denouncing the Nazi barbarism. His failure to do so actually strengthens his faith in God and leads to his own sacrifice. Kassovitz gives a moving performance as outraged priest. The numerous supporting roles are used to good effect on many levels - from the production-minded attitude of the SS killers in eliminating their assigned "units" to the pomp and power of the Vatican officials as they walk the balance beam between denouncing the Germans and supporting them through the Church's official silence on the matter of the Holocaust.

Production values are high across the board. Cinematography by Patrick Blossier is some of the finest I have seen this year. The many and varied sequences of trains trundling across the landscape are beautifully composed and give you an empty feeling as the meaning of the tightly closed cattle cars heading east with their human cargo is made clear. Music, by Armand Amar, especially over the train sequences, conveys the urgency of Gerstein's plight and the relentlessness of the extermination machine put into action by Hitler and his henchmen. Production design by Ari Hantke captures the many locales from the vast death camps to the heart of the Vatican. Costume design by Edith Vesperini accurately depicts the daunting militarism of the SS uniforms, the pompous elegance of the upper level Catholic clergy and the simplicity of Father Fontana's cassock and other period outfitting.

Some may complain that the whole Holocaust "thing" has been overdone. I don't think it is mined enough and give kudos to Costa-Gavras and his cast and crew in bringing us to a time and place when mankind struggled for its very survival.