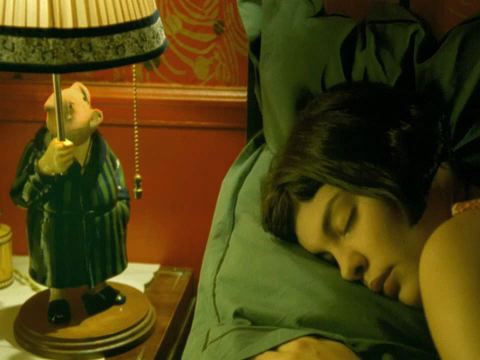 When Amelie, a young waitress living in Paris' Montmarte neighborhood, hears about Princess Di's death on her TV, it sets off a chain of events that lead to her discovery of a young boy's stashed treasures behind her bathroom wall. She makes a vow to hunt down this man and return his treasures. Should he be touched, she'll devote her life to doing good deeds. Director Jean-Pierre Jeunet and his cowriter Guillaume Laurant ("The City of Lost Children") have created a fantastical modern day fairy tale which is France's submission for this year's Foreign Language Oscar, "Amelie."

Audrey Tautou, who first came to attention in "Venus Beauty Institute," is the waif-like heroine whose whimsical ways of doing good (and, in one deserving case, mischief) cause fate, along with some helping hands, to return to her a love match. While this technically wondrous and charming film is a delight, it's ideas aren't always original and its run time is excessive.

"Amelie" exhibits the power of economical filmmaking by presenting us with her entire childhood, from conception through the freakish loss of her mother Amandine Poulain (Flora Guiet) to the present, as the opening credits roll. This segment is a mini-masterpiece.

We're then introduced to the cast of characters Amelie sees on a day to day basis, all ingeniously described by a quirky list of likes and dislikes. Her widowed father Raphael (Rufus) is obsessed with building an ornate garden altar for the urn containing the ashes of his deceased wife. The local grocer Collignon (Urbain Cancelier) daily berates his assistant Lucien (Lorella Cravotta). Building concierge Madeleine (Yolande Moreau) weeps over the love letters of her deceased husband who left her for another woman years before. Mysterious neighbor Dufayel (Serge Merlin), known as the 'Glass Man' because of the brittleness of his bones, never leaves his apartment and paints the same Renoir painting over and over.

As Amelie opens the world for some, arranges love matches and letters for others, she continues to cross paths with Nino Quincampoix (Mathieu Kassovitz, "La Haine"), a man consumed with collecting the discards of Parisian photo booths. Painfully shy when it comes to her own love match, Amelie receives assistance from the unlikeliest of her beneficiaries.

"Amelie" is the type of movie where paintings speak and kidnapped garden gnomes become world travellers. There are elements of fate and images which strongly recall "Run Lola Run," (a man crossing a line of cassocked priests is the flip to Lola's encounter with nuns). Amelie's effect on the people in her world is foreshadowed in the credits, when she sets of a chain of falling dominoes. "Delicatessen" star Pignon once again proves his percussive predilections. Yet Amelie is also prone to self grandiosity, at one point imagining herself as Mother Theresa and the object of a state funeral attended by thousands, an oddly sour bit of meandering for this tale. (The R-rated "Amelie" also leaves family fare territory with several scenes set in a porno shop, scenes of lovemaking and brief nudity.)

Art Director Volker Schafer and cinematographer Bruno Delbonnel present a rather gray Paris where the people in the foreground provide the color. Production design by Aline Bonetto and set decoration by Marie-Laure Valla are full of character, particularly Amelie's apartment where she's surrounded by the doleful animal objects of a lonely childhood. Composer Yann Tiersen's ("The Dreamlife of Angels") score suggests a French circus.

"Amelie" is a triumph of an imagination that occasionally doesn't know when to stop wandering.

Little Amelie Poulain (Flora Guiet) had anything but a normal life. Misdiagnosed, by her father (Rufus), with an unusual heart defect, she was educated by her mother at home and spent much of her childhood alone, developing a vivid imagination. Now, adult Amelie (Audrey Tautou) is healthy, quite pretty and works in a small café. When Princess Diana is killed in the fateful car crash in 1997 it prompts Amelie to attempt to bring happiness and joy to her neighbors and coworkers in Jean-Pierre Jeunet's "Amelie."

Helmer/scribe Jean-Pierre Jeunet is probably best known for his directing collaboration with Marc Caro on their wonderfully offbeat futuristic story of post-Apocalypse "Delicatessen" and the surrealistic "The City of Lost Children." Both stories deal with a world not yet conceived, but fully realized in this pair's work. Jeunet goes it alone in his latest, "Amelie," and bases this tale of the pretty, innocent title character living in modern, familiar Paris (though there are elements of the director's beloved surrealism throughout the film).

When Amelie finds an old metal box stuff with a child's memorabilia hidden in her bathroom wall, she decides to try to find the owner, thinking that, if she is successful, it is a sign that she should make it her job to bring happiness to those around her. Her gumshoe work is a winner when she finally locates the box's owner and secretly watches him emotionally go through his old treasure, changing the lonely man's life. This prompts her to bring together one of her coworkers, hypochondriac Georgette (Isabelle Nanty), and an ill-tempered customer, Joseph (Dominique Pinon). She then sets her sights on an old neighbor, Dufayel (Serge Martin), an artist with a rare disease that makes his bones brittle, requiring that he be a recluse and that everything in his apartment be padded. Amelie, through the miracle of video, shows him a world of wonder outside the confines of his home. She also becomes smitten with a lonely young man, Nino (Mathieu Kassovitz), who works in an adult video store and moonlights as a funhouse spook. He also collects discarded pictures left at photo booths around Paris, creating an imaginative portfolio with his finds.

"Amelie" is if anything, a cute, whimsical and clever little film that reps a distinct departure from the dark humor of Jeunet's previous films with Marc Caro. There is originality and style galore as pretty Amelie works hard to make positive changes in the lives of those around her. The sometime frenetic camera work by Bruno Delbonnel compliments the visual style the director puts forth with his varied techniques - at one point, one of the photos that Nino collects (four identical shots of a guy (Ticky Holgado)) not only starts talking to him, each photo has a discussion with his counterparts. The variety of gimmicks abounds, sometimes to ridiculous degrees and sometimes sublime, but always entertaining throughout.

The large cast has a good time with the material. Audrey Tautou, with her large, doe eyes and innocent expression and demeanor, anchors the story with her charm and palpable caring for those around her. When the local grocer (Urbain Cancelier) picks on his simple, but kind, assistant Lucien (James Debouzze), Amelie begins a campaign to drive the cruel man crazy and make Lucien finally like his job. She also helps her building concierge resolve a longtime remorse over a husband who left decades before. The rest of the numerous cast members all lend their efforts to create a wide variety of folks populating Amelie's world.

Jeunet and co scripter Guillaume Laurant build varied surreal elements into the uncomplicated, sweet story of Amelie's passion to help those around her. As a child she had a suicidal goldfish named Blubber that she set free to save him from himself. The impression of a world traveling garden gnome is the catalyst for her widowed, aging father to finally break away and go off to see the world for himself. The aforementioned talking photos is handled with great humor and style, just one of the many laughs this good-natured movie evokes.

The technical staff - from production (Aline Bonetto) to costume (Madeline Fontaine and Emma Lebail) to editing (Herve Schneid) to art design (Volker Shafer) and the rest - all lend their talented hands to fully realize Jeunet's unusual view of the world through the appealing eyes of Amelie. The flick may not be deep but it is entertaining for both the eye and the intellect.