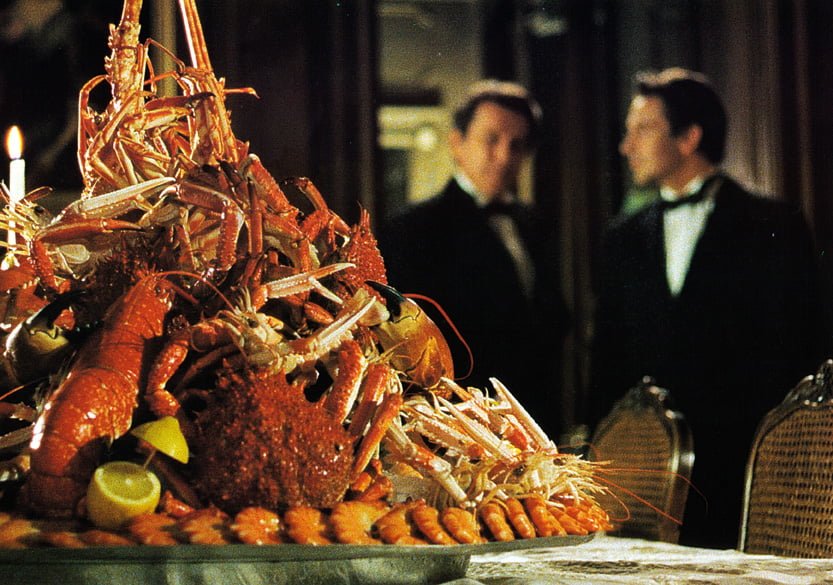 Nicholas Riviere (Jean-Pierre Lorit, "Red," "Alice and Martin") is an unambitious young man working temporarily as a waiter when he runs into Delamont (Bernard Giraudeau, "Water Drops on Burning Rocks," "Ridicule") a wealthy entrepreneur. Delamont challenges Nicholas to identify the ingredients of an amuse bouche, decides he has intelligence in his eyes, and makes him an overgenerous offer for a strange job - to be his personal taster in "A Matter of Taste."

Cowriter (with Gilles Taurand, "Time Regained")/director Bernard Rapp tells his tale in flashbacks from a present day investigation into an unknown crime. While there have been many films which investigate the transference of personality, there have been fewer on the subjugation of it. Rapp's psychological thriller plays like an inverted version of Joseph Losey's "The Servant" as seen through the gorgeous rot of Peter Greenaway's films.

Although Delamont has an aversion to cheese and fish, it soon becomes clear that he wants more from Nicholas than to taste his food. As he seduces Nicholas with access to his monied lifestyle, his demands on the man slowly increase. His offering stipulation that Nicholas quit smoking segues into Nicholas not eating any foods he dislikes, then more, as he tries to recreate Nicholas in his own image. Delamont's displeasure is shown harshly, parentally, building an interdependence between the two that's like, but not actually, a love affair.

Nicholas' girlfriend Beatrice (Florence Thomassin) provides the audience's point of view, watching in horror as Nicholas becomes consumed by the industrialist, trying to figuratively shake some sense into him until she realizes she literally no longer knows this man.

Giraudeau smoothly creates a cinematic monster, a polished devil of refinement but no feeling. Lorit has a more difficult arc to follow, as the film's one failure is its inability to make Nicholas' seduction totally believable, but he makes a fine mirror for Giraudeau.

"A Matter of Taste" is a deliciously insidious thriller.

Nicolas Riviere (Jean-Pierre Lorit) is a struggling young man trying to eke out a living as a waiter in a posh restaurant in Paris. One day, while serving lunch to a pair of well-dressed businessmen, he is called upon by one, Frederic Delamont (Bernard Giraudeau), who fears an allergic reaction, to identify the ingredients of the dish being served. When the younger man accurately discerns the content of the food, Delamont offers him a well-paying job as food taster. The bond of trust that is established between the two soon shatters amid deceit and manipulation in "A Matter of Taste."

There is an air of Alfred Hitchcock to the novel-based ("Affaires de gout" by Philippe Balland) tale adapted by helmer Bernard Rapp and Gilles Taurand with wealthy Delamont attempting to turn Nicolas into a clone of himself. It is never clear just what the older man wants from his protégé, though. Does he desire Nicolas sexually? Or, does Frederic consider Riviere a kind of pet that he can punish or praise at will? Then again, could it be a power trip for Delamont who can dictate the life of another and, with his wealth, force Nicolas into his own image? In any case, Delamont is a puppet master and he uses his influence to get what he wants, regardless of the cost to others.

Giraudea is elegantly superb (and creepy) as the selfish entrepreneur who offers Nicolas a salary so enticing he can't possibly refuse, regardless of the demands of the job. But, as Faust found out when he sold his soul to the Devil, the cost of Riviere's choice may prove far greater than the gains. Delamont offers him a glimpse, at least, of unabashed wealth and provides sumptuous foods, the best of wines and all the comforts that money can offer. Then, the real costs start to mount. To fulfill his taster duties, Nicolas must be available 24-hours a day, undergo a training program and is ensconced in Frederic's old family estate. The training begins with a forced fast where only water, salad and diet pills are allowed. Nicolas is paid for his efforts with an elaborate seafood buffet (food that Delamont is allergic to) and allowed to eat his fill. It's not clear if Nicolas succumbs to gluttony or food poisoning, but he is definitely weaned off of les fruits de mer - a move to make the young man more like his mentor.

Complicating matters is Nicolas's girlfriend Beatrice (Florence Thomassin), a pretty, independent-minded young woman who runs a newsstand and abhors the bourgeois lifestyle represented by Delamont. She is also the first to see that Nicolas is in the throes of change and, day-by-day, becoming more and more like his employer. When Frederic requires that his taster move in under his roof, his domination seems complete, until a skiing accident lays the boss up with a broken leg. When, later on, Nicolas breaks his own leg, Delamont is upset. It took too long, in his mind, for his ward to make the excruciatingly painful gesture. The trust that began in their relationship is now lost and the mentor/student roles are long gone. Interspersed within this tale of possession are a series of interviews by the police that, in the end, coincide and we learn the true finis to the story.

Jean-Pierre Lorit holds his own opposite the creepy character of Giraudeau's Delamont. The younger, though also experienced, actor builds a complex character in Nicolas, who is flattered, at first, by his mentor, then, subtly takes on Frederic's persona of looks, tastes and habits. The young man, eventually, realizes that he is transforming into what Frederic dictates he is to be and he, in turn, rebels against his mentor. What happens between the two men is held very close to the chest until the film's end when all questions are answered.

Techs are solid and befit the offbeat story of duality and possession providing conventionally straightforward looks that anchor film's whimsy. Giraudeau and Lorit play well off of each other and create interesting, if not terribly likable, characters. Thomassin adds a dimension of complexity and mistrust (for Delamont) as Nicolas's savvy girlfriend. Helmer Rapp confidently directs his players in a focused, evenly paced manner that maintains the film's underlying tension