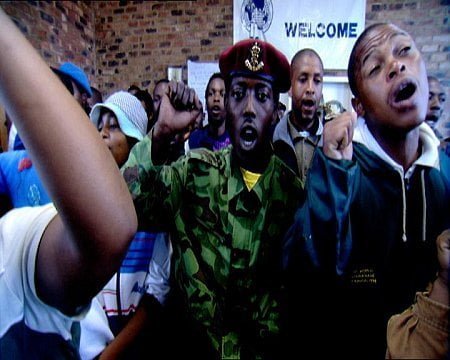 The power of protest songs to unite and bind a repressed people is examined by first time feature documentary maker Lee Hirsch as he journeys to South Africa to tell the story of how the black population overthrew the yoke of apartheid that ruled that nation for decades. He chronicles the rise of non-violent resistance, with the freedom songs at its core, as the downtrodden majority, subjugated to impoverishment by their white minority masters who took power in 1948, rise to take back control of their country in "Amandla!"

In 1948, the apartheid government came to power in South Africa, stripping basic human rights from the native Black citizenry. For over four decades a struggle ensued to restore those rights. Director Lee Hirsch spent a decade himself documenting this history through the power of its music in "Amandla! A Revolution in Four Part Harmony."

Hirsch loosely divides his documentary by decade, beginning with both the Black community of Sophiatown being forcibly ejected and moved 25 kilometers to Meadowlands, barracks-like housing reminiscent of that shown in the beginning of Brazil's "Cidade de Deus," and the exhumation of the bones of Vuyisile Muni, a political songwriter/poet hung for his peaceable protests. While much of Hirsch's camerawork is vibrant and many subjects engaging (particularly those like singer/actress Sophie Mgcina who break into spontaneous song during recollections), he fails to fully define the evolution of the music within his own structure.

Opening narrator, music producer Sisifo Ntuli, lays the ground by analyzing the effectiveness of delivering a message via song rather than speech. Musician Hugh Maskela is shown performing "The Train Song," a lament about the necessity of long commutes dividing families inflicted by apartheid, to immense crowds. A post Sharpesville massacre song, 'What Have We Done?,' is a 1970s dirge consisting of its title sung over and over.

Only in the 1980s, though, does Hirsch really succeed in distinctly tying the music to its decade. A freedom fighter discusses uplifting war songs used to celebrate the fallen so that constant mourning wouldn't drag their spirits down. (A historical conundrum, that the Africans lost so many wars because they sang first letting the Brits identify their whereabouts, is left dangling.) A ritualistic African tribal dance becomes the Toyi-Toyi, a militaristic march which kept its practitioners in good shape while irritating white riot police (three fat, sunburned retired policeman are interviewed as they barbecue slabs of meat, the only segment to feature rudimentary camerawork).

Hirsch employees the usual talking heads, concerts and archival footage in addition to the questionable choice of artistic recreations to tell his tale. Given the potential richness and entertainment value of the subject matter, Hirsch's documentary engages more with the honorable nature of its subject matter than its execution. Pacing, length and an unfocussed narrative thread eventually wear the viewer down.

"Amandla! A Revolution in Four Part Harmony" is a curiosity for students of apartheid and African music, but not involving enough for the general public.

"Amandla!" focuses, initially, on the exhumation from a pauper's grave of one of the black population's unsung heroes, political activist and composer Vuyisile Mini. Mini's protest anthems, such as "Beware Verwoerd," his warning to the architect of South African apartheid - the enforced segregation of the majority black population by the ruling white minority - brought him to the attention of the authorities and ended in his hanging in 1964 (the same year that Nelson Mandela was sentenced to life in prison). The film moves forward and develops its view into the general statement that music will make you free, with the popular protest songs expressing the feelings of the people against their oppressive rulers.

Hirsch and producer Sherry Simpson spent nine years putting together this document of the black South African struggle for freedom and combine a plethora of interviews, a wealth of archival footage, historical recreations and many musical events. Such South African music notables as trumpeter Hugh Masekela, singer Miriam Makeba, jazz pianist Abdullah Ibrahim, singer/songwriter Vusi Mahlasela and singer Sibongile Khumalo are just a few of the many talking head interviews that give perspective to the decades-long struggle to oust the white minority from its total domination of South Africa.

The story of the struggle begins, in earnest, in 1948, when the all-white National party comes to power with apartheid as the key to their legislative agenda. This begins a reign of oppression by the white minority over the black majority, starting with the Population Registration Act that required all South Africans to be racially classified. This was followed by the Group Areas Act, controlling black access into white areas and then the hated "pass books" containing fingerprints, photo and information regarding access to non-black areas. All black South Africans (not white) were required to carry the books at all times and would be immediately arrested if they did not have it on their person. Blacks were prohibited to gather in groups of 10 or more.

The repression of the black majority gave rise to protest songs as one of the few means of expression left to a people not allowed to even travel freely in their own country. For nearly 40 years the white National Party ruled with an iron fist but it could not stop the desire of the black South Africans to rule their own destiny. "Amandla!" tells about the music that was the heart and soul of the non-violent movement that ended in free elections and Nelson Mandela declared president.

The protest music that spans four decades of oppression is not evolutionary, not changing over the years but becoming more refined in meaning. The sameness of the music, over the decades, makes for a memorable tool for the black people to carry forth their protests against apartheid. The basically unchanging music helps keep the movement going, as it remains familiar to all no matter what age. There are exceptions to the mass songs and dance, like the Toyi-Toyi, that takes on a more personal viewpoint (and are the most effective for the documentary). A moving example of this expression such as the haunting song, "Madame Please," sung by singer/actress Sophie Mgcina, about a black maid imploring her white mistress to think about what it would be like to walk in her, the maid's, shoes.

"Amandla!" is an impassioned effort by its makers but one that is too plodding and stilted. The main problem that keeps the film from attaining the edge it seeks is the use of so many talking heads. Sometimes, when the interviewee explains some past history, the makers edit in archive footage from the time. This works very well but is not used nearly enough. Instead, the talking heads dominate the screen for extended periods, draining the energy the film might have possessed. The earnestness of Hirsch's is undercut by his inexperience in controlling the film's flow and pace.

"Amandla!" is an interesting work that doesn't quite grab my interest. Although it is only 103 minutes long, the plodding pace makes it seem much longer. It has a lot of heart, though.