All The Pretty Horses 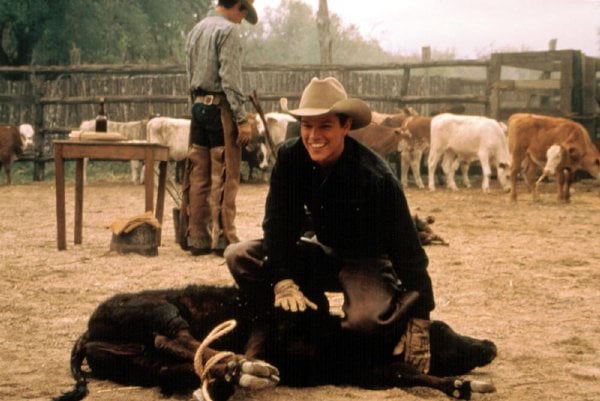 John Grady Cole (Matt Damon) and Lacey Rawlins (Henry Thomas) are a couple of cowboys without a range to roam in 1945 Texas. When John learns that his inheritance, the family ranch, is lost, he and his best pal decide to leave the fast shrinking plains of home and seek adventure on the still-vast ranches of Mexico. And, adventure they get, in spades, as they head their horses into a world full of unknowns in "All the Pretty Horses."

When John Grady Cole's (Matt Damon) granddaddy dies, his mother inherits the Texas cattle ranch that John works and loves. She's remarried and living in California, though, and decides to sell. Heartbroken, John teams up with best friend Lacey Rawlins (Henry Thomas, "E.T.") and heads for Mexico on horseback searching for the life of the cowboy in "All the Pretty Horses."

Before they cross the border they realize they're being trailed by a lone horseman. Cole takes kindly to the younger runaway Bevins (Lucas Black, "Sling Blade") while cynical Rawlins thinks he'll only bring them trouble. After taunting the young boy, Rawlins challenges him to prove his shot and must eat his words and accept his company when Bevins blows a hole through the middle of Rawlin's airborne wallet.

Adapted by Ted Tally ("The Silence of the Lambs") from Cormac McCarthy's National Book Prize winner, "All the Pretty Horses" is a tale of a young man fighting to maintain his integrity as he crosses into adulthood set against the decline of the post World War II 1945 West. The film's editting process was much talked about, begun when Damon proclaimed Thornton's initial four hour cut the best film he'd ever been in. The final 117 minute cut is episodic, problematic and pretentious, although it does feature some good performances and beautiful vistas.

Damon doesn't lack charm as the lead, although at times his all American boyish looks make his performance seem dominated by his glaringly white teeth. Cruz, in her first major American role, is in the film far less than its marketting would have one believe. Unfortunately, she's just symbolic forbidden fruit that, once plucked, brings tragedy. Henry Thomas is a good foil for Damon, the pessimist/realist to Damon's optimist/dreamer. Lucas Black is terrific as the quirky Blevins, another bold figure who comes to a tragic end which signifies in Coles' journey to manhood.

Robert Patrick ("Terminator 2") captures the wasted life of Cole's father in a scant amount of screen time. Sam Shepard appears to good effect as the lawyer who gives Cole the bad news about his granddaddy's ranch. Blades is wasted as the betrayed Mexican ranch owner while Miriam Colon is strikingly good as his sister Alfonsa, the woman who carries out his wishes. Most outstanding of the supporting players is Bruce Dern as an American judge who appears late in the picture to guide Cole's wounded psyche back to health.

The film is gorgeously photographed by Barry Markowitz ("Sling Blade"), although at times the combination of his shots and Marty Stuart's score give the effect of being in the midst of a Marlboro commercial. Billy Bob's film may well have benefitted from the inclusion of an hour of unused material and the loss of his some of his more blatantly sentimental cowboy romanticism.

Director Billy Bob Thornton made quite a splash with his debut film, "Sling Blade," giving a tour de force performance as Karl Childers in a dark, brooding setting. It was an auspicious first feature and whetted my appetite for more, so I eagerly awaited his latest effort - especially knowing that Penelope Cruz is in it. I was disappointed in "All the Pretty Horses."

There has been a lot of publicity about the film over the past months. Billy Bob's first cut was reportedly four-hours long and had been deemed, by some, as a masterpiece. The released film is considerably shorter (around two hours) and lacks any luster. I fear the best of the movie may have landed on the cutting room floor.

The Cormac McCarthy story, adapted by Ted Tally, follows the heroes, John and Lacey, from their dead end cow-punching careers in west Texas. John tells his friend about the vast ranches that still exist south of the border, places where a cowboy can ply his trade for about a hundred years. They head across the Rio Grande and begin their trek through Mexico. Along the way they pick up a young straggler named Jimmy Blevins (Lucas Black) who has a questionable past and is riding a horse that he claims is his, but is probably not.

Jimmy gets separated from his two companions because of a hereditary fear of lightning storms - many of Blevins' family were hit by lightning, including Jimmy, twice. John and Lacey eventually end up at the ranch of Don Hector Rocha (Ruben Blades), who takes them on board as ranch hands. John's encyclopedic knowledge of horseflesh is just what the Don needs and promotes John Grady to be his principal horse breeder. John also meets, and falls head over heels for, his boss's beautiful, willful daughter Alejandra (Penelope Cruz).

The stories contained within "All the Pretty Horses" are numerous and, unfortunately, not fully developed. Each sequence - John and Lacey's journey; meeting Jimmy; going to work on the ranch; breaking broncos; falling in love; getting arrested; being accomplices in a murder - are each handled in a perfunctory, self-contained manner that feels more like a series of short stories strung together. Things are stripped to the bone and the story pieces are far too lean, development wise, to sustain any empathy. There are several surreal moments peppered through that film that are interesting but would make more sense if you read the novel.

The characters, like the story, are paired down to their essential basics. John Grady Cole is a good man who finds himself thrust from one situation to the next, sometimes good and sometimes very bad. When he falls in love with Alejandra, it is without spark because it is so inevitable. John and Lacey's association with Jimmy, from the start, is destined to haunt them later when they are arrested as accomplices of the accused teenaged murderer and horse thief. The pair are silent bystanders at Blevins' own murder at the hands of the vengeful policia. Even the extended sequence where John and Lacey break 16 wild horses in four days feels like an interlude apart from the story.

Matt Damon gives his John Grady Cole an easygoing likableness with a charming, ready smile. John is the central figure to the tale and the actor holds the screen well. Henry Thomas plays John's sidekick, Lacey, and comes across as the more thoughtful and less headstrong of the two, going along with the venture because of his friendship to John. Lucas Black, who made such a notable impression in the TV series, "American Gothic," then in "Sling Blade," continues to prove himself to be a capable young character actor. As laid-back as Jimmy seems to be, there is an undercurrent of violence in the boy that telegraphs problems early on. Most disappointing is the paucity of screen time afforded to the beautiful Penelope Cruz. Her Alejandra has little to do but look very beautiful.

Supporting cast is decent but the talent here, like Ruben Blades, is wasted. There is little development to most of the background characters, giving the story a flat, underdeveloped feel. Sam Shepard is nearly forgotten in the role of the lawyer who breaks the bad news of the inheritance to John. Bruce Dern is intriguing and underutilized as the judge who becomes John's confessor in the end. Miriam Colon fares best as Alejanda's aunt and protector Dona Alfonsa.

Thornton surrounds himself with the technical team that helped him make "Sling Blade" and it shows in the crafting of the film. Barry Markowitz captures the stark beauty of the panoramic West and produces some beautiful imagery of running horses. Costumer Doug Hall outfits the handsome cast in a look that is a throwback to the Old West. The production design, by Clark Hunter, is retro West without giving a cliched cowboy and Indian feel. The techs deserve a story that has more meat to it.

I wonder what the director's cut will be like?