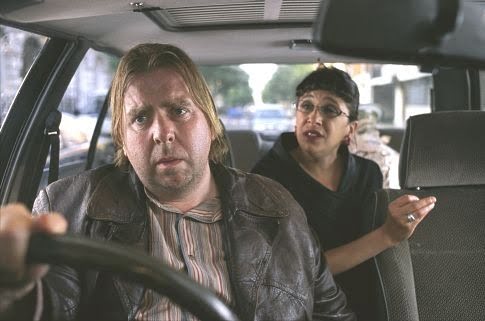 Phil Bassett (Timothy Spall, "Intimacy") is an overweight cabbie who lives in a London tenement with his common law wife Penny (Leslie Manville) and their two overweight children Rachel (Alison Garland) and Rory (James Corden). The daily grind has made Penny accusatory, Rory belligerent, Rachel withdrawn and Phil philosophical, but a discussion with a chic French customer makes Phil realize he wants "All or Nothing."

After diversions with career girls and period performers, writer/director Mike Leigh returns to the working class of "Secrets & Lies" and "Life Is Sweet." Within the confines of a dreary South London housing unit, Leigh and his actors make the everyday a revelatory look at human behavior.

Penny returns from her days as a supermarket cashier to make supper with Rachel, who works as a cleaner in a nursing home. Rory spends his days in front of the TV, or attacking the older but smaller Craig (Ben Crompton) in the courtyard. Penny's attempts to shape up Rory are met with verbal abuse which Phil tells her to ignore. Penny's gibes at Phil's lack of ambition and work ethic drive him into a shell.

These individuals are so caught up under the crushing weight of continuing their existence that they need a shakeup, some subtle, some seismic, to re-see those around them. As in life, not everything is wrapped up evenly or neatly. Leigh makes us feel like we've discovered behavioral science as character flaws' causal roots become clear. As in the title, it is abundantly clear that life is better for those who think positively. This is most evident regarding Maureen against Penny with Phil's 'That's life' attitude balancing the seesaw.

Once again, Leigh has gathered an ensemble who serve him well, with Spall's Bassett a true hangdog hound of well meaning mediocrity. Spall shifts gears from the apologetic existence he's created, crying that he's 'like a little tree without water,' adding incredible depth to seemingly simple Phil. Leslie Manville conveys the wearying effect of a constant nagger so well, it takes a while to realize the potency of her unwitting toxin. Ruth Sheen's Maureen emits the type of chummy, no-nonsense energy that makes for a stalwart friend or family member while Marion Bailey is almost scary in her rendition of a helpless, maudlin drunk. Robert Wilfort, Gary McDonald and Diveen Henry all make impressions in small roles as a doctor, cab company owner and dispatcher. Kathryn Hunter is terrific as Phil's muse-like fare, who connects with him in unexpected ways.

With "All or Nothing," Leigh reminds us of those little things, so easy to forget, that mean everything.

Director/scenarist Mike Leigh is best known for his angst-driven, working class tales of day-to-day life in England (with the exception of his last film, the large scale musical homage to Gilbert & Sullivan, "Topsy-Turvy"). The helmer returns to what he knows best in his study of Phil and Penny Basset (Timothy Spall and Lesley Manville), a taxi driver and Safeway clerk living a despairing, common law marriage. Tensions abound in the tiny family until, one day, an unexpected emergency arises and unites the them in "All or Nothing."

While the Basset family, including daughter Rachel (Alison Garland) and son Rory (James Cordend), is the central subject for "All or Nothing," the film is really a fairly large ensemble piece based in a block of council flats (a kind of government housing project). Besides the Bassets, there is Maureen (Ruth Sheen), Penny's good friend and the only real ray of sunshine in all the characters. Her daughter, Donna (Helen Coker) is a sullen, argumentative young woman stuck in a relationship with a selfish, mean bloke - until she tells him she is pregnant.

Samantha (Sally Hawkins) is sluttish looking teenager who hangs around the flats with an eye out for a good time. Her parents, who she loathes, are both lushes, particularly her mom, Carol (Marion Bailey), whose gin-soaked mind and body find it almost impossible to focus on life's realities. There is also Cecile (Kathryn Hunter), a French lady (with an outrageous accent) whom Phil gives a ride and learns a thing or two from his passenger, and Jason (Daniel Mays) a shy local boy who loves Samantha but has trouble expressing himself except in a self-mutilating way.

The unrelenting dourness and desperation of "All or Nothing" could be a turnoff, but in Leigh's capable hands is fascinating to watch. With the exception of Maureen, there are few who you would honestly like because of the negative air that all possess. Spall, who, if you've followed his career, should eventually be a candidate for lifetime achievement, and once again shows his phenomenal talent with his hangdog, beaten look and utter helplessness. Manville is his opposite as Patty, who works hard and wants more from her life and her husband than just to get by. When Rory collapses in the apartment courtyard, the tension builds when Phil is nowhere to be found. Marion Bailey as Carol is pathetic and sad, a caricature of a character but one that elicits the sympathy one reserves for the chronically ill. The rest of the ensemble cast does well in their small roles.

Leigh wraps things up a bit too perfunctorily with a "soon they will live happily ever after" ending that smacks of artificiality after all the angst we've been subjected to. The fine acting and steady hand of Mike Leigh lets this slide by, as do the under-resolved loose ends of the other characters. Even though the runtime is in excess of two hours, I never did find the film to be boring, just relentlessly depressing - until the slight upbeat swing at the end.