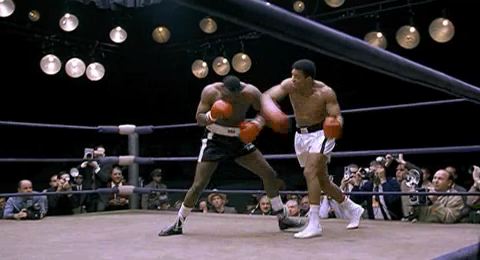 In 1964 Muhammad Ali, then called Cassius Clay, turned the boxing world on its ear with his triumphant defeat of world heavyweight champion Sonny Liston. For the next 10 years Ali experienced victory and defeat, in and out of the ring, only to come back from his forced retirement to take the title away from George Foreman in the famous Rumble in the Jungle in 1974. Michael Mann helms the effort to bring this magnificent athlete's story to big screen starring Will Smith as "Ali."

Cowriter/director Michael Mann ("The Insider") showcases the decade between 1964, when the 22 year old Cassius Clay grabbed the world heavyweight boxing title from Sonny Liston, through the civil rights movement and Vietnam War which redefined a country and shaped the morals of a great athlete, to 1974 when that man regained his title under another name - "Ali."

Featuring amazingly accurate impersonations from Will Smith ("Men in Black") in the title role and Jon Voight ("Pearl Harbor") as Howard Cosell, as well as terrific work from Ron Silver ("Reversal of Fortune") as coach Angelo Dundee, Jamie Foxx ("Any Given Sunday") as corner and quip man Drew "Bundini" Brown and Jada Pinkett Smith as Ali's first wife Sonji Roi, "Ali" suffers from a lack of focus. Mann's attempt to notate every historical event in a decade dense with them detracts from his biographical subject. That the recent Oscar winning documentary "When We Kings" covered the event "Ali" culminates with also doesn't help.

Mann and Coscreenwriters Stephen J. Rivele and Christopher Wilkinson ("Nixon") quickly begin name dropping by opening the film with an extended performance by Sam Cooke (David Elliott). In rapid fire succession, we meet famous friends Malcolm X (Mario van Peebles, "Panther") and Cosell and see Bundini insinuate himself into Ali's team and become drinking buddies with Cassius Clay Sr. (Giancarlo Esposito, "Monkeybone"). After the Liston fight, Clay aligns himself with the Church of Islam and takes leader Elijah's (Albert Hall, "Get on the Bus") opportunistic son Herbert (Barry Shabaka Henley, "Rush Hour") on as his manager. Ali goes through a string of wives as his fortunes fall (he's banned from boxing for refusing to step forward for the draft) and rise again with the career resurrecting Rumble in the Jungle against George Foreman (boxer Charles Shufford) in Zaire.

The film's ofttimes impressionistic structure alternately presents too much information too quickly ('Float like a butterfly' author Bundini's entry and exit, Ali's marriages and children) and veers off on tangents for extended periods (the assassination of Malcolm X, musical performances). Ali's lawyer (Joe Morton, "Bounce") is even shown on a pay phone to the champ beneath the motel balcony where Martin Luther King (Levar Burton, "Roots") is being shot, which, if true, nonetheless stretches credibility here. Still, "Ali" is involving simply because its subject is so compelling, a deeply religious man with a weakness for women, a showboat who put his money where his mouth was, a man who demanded and gave loyalty yet allowed himself to be used. As his marriage to second wife Belinda (Nona Gaye) breaks down in Zaire over his affair with Veronica Porsche (Michael Michele, TV's "ER"), she's disgusted that he trusts Don King (Mykelti Williamson, "Three Kings"), who 'lives white, talks black and thinks green.'

Mann goes against the commercial grain by bringing us into boxing bouts with no slo-mo (climatic last punch excepted) and once again employing the offbeat world music composers Lisa Gerrard and Pieter Bourke ("The Insider"). Cinematographer Emmanuel Lubezki ("A Little Princess") eschews a glossy commercial style for the overlit, grainy look of the period.

Smith's physical transformation, including his new bulk and taped down ears, is so impressive, one forgets one's watching the star of "The Wild, Wild West." He's got the moves and the voice to match. His chemistry with the equally impressive Voight as Cosell is palpable.

While "Ali" the film isn't the greatest, its quality components still make it an Oscar contender.

There are too many problems with this ambitious biopic that keep it from attaining the "greatest" status that helmer/co writer Mann expects. There are the proverbial too many cooks with four other writers, besides Mann, involved in the story and screenplay and it plays like the director parceled out sections for writer to develop separately causing significant continuity and pacing problems. One glaring fault is a lengthy sidebar revolving around Malcolm X (Mario Van Peebles). The Muslim leader was, indeed, a strong influence in Ali's conversion to Islam, but a full 15+ minutes of airtime is spent on telling the story of the revolutionary martyr, with little reference to Ali. If I want to see the life of Malcolm X I'll watch Spike Lee's "X." As it is, this extended diversion away from Ali's fascinating story is a major distraction.

Another annoying choice by Mann and company is to allow the music - albeit, very good covers of some great R&B tunes by the likes of Sam Cook and Marvin Gaye - to overwhelm the film, especially during the first third. Extended live performances, played very loud, tend to distract when they should blend in with the action (like Bobby Vincent's performance in Martin Scorsese's "GoodFellas"). In "Ali" the songs obstruct the story and unbalance the pace of the film first third. Fortunately, the overt music becomes more subdued as the film plays out.

Acting is uniformly good with some sparkling moments from the players. Will Smith is uneven as Ali, though I think this is the material rather than the actor. He really shines during his public performances as the champ, giving a genuine tone to the bombastic chatter that made Ali so popular or, to some, notorious. Smith is, almost eerily, true to the form of the champion in the ring. The moves and variety of styles that Ali developed from his first meeting with Liston to the rope-a-dope victory against George Foreman in Zaire are near perfectly recreated by Smith - note that the actor did all of his own boxing in the film.

There is an incredible wealth of talent in the supporting performances. Jon Voight should garner award talk for his dead-on portrayal of sportscaster and Ali's friend, Howard Cosell. Because of the actor's Rod Steiger-style penchant for over acting lately (who can forget his snake hunter in "Anaconda"), his appearance on the screen, made up to resemble the lawyer-turned-sports-commentator, met with derisive laughter by some. Voight soon overcomes his past acting foibles and forges a character that looks, sounds and acts like Howard Cosell and makes you believe in the real friendship that grew between the two very different men. Ron Silver gives a subtler, yet equally solid, performance as Ali's longtime trainer Angelo Dundee. Silver makes you believe that he knows his craft and had the best interests in the champ in his heart. Jamie Foxx is also getting some note as the Al's troubled corner man Drew "Bundini" Brown. Mario Van Peebles overacts as Malcolm X while Mykelti Williamson has some fun as the flamboyant Don King. The rest of the large cast play people ranging from George Foreman (Charles Shufford) and Martin Luther King (LeVar Burton) to poetess Maya Angelou (Martha Edgerton) and Ali's dad (Giancarlo Esposito).

The story/screenplay, by Mann, Eric Roth, Gregory Allen Howard, Stephen J. Rivele and Christopher Wilkinson, does a terrific job of handling the documented aspects of Ali's colorful life and career. From the legendary fight where 22 year old Cassius Clay wrested the world heavyweight champion title from Sonny Liston in 1964 to the incredible Rumble in the Jungle in Kinshasa, Zaire ten years later the filmmakers recreated the events that we remember from the champ's rise to international fame. Where the film loses steam is when the story delves into the private, unpublicized life of Muhammad Ali. No punches are pulled on telling about Ali's amorous side involving several marriages and infidelities, but this side of his life stilts the film's pace, too. Ali's personal reflections on his life - the rise to fame and fortune is abruptly halted when he decides to resist the draft with his famous statement, "I ain't got no quarrel with the Viet Cong" and is charged with draft evasion - are not handled as well as his public persona.

Techs for this big budget extravaganza meet the needs of such an epic storytelling. Emmanuel Lubezki captures the life of Ali on film with the same energy and verve as Mann has in his (sometimes uneven) direction. Makeup, by a team of artisans, help render the faces of the characters onto the actors so that, at times, your eye sees the people the players are depicting. Production and art direction teams do a fine job in capturing the trappings of the 10-year period being laid open to our scrutiny. The three-part story reaches its grandest point with the staging of events around the famous Rumble in the Jungle. Obviously, the filmmakers watched the terrific documentary, "When We Were Kings" (which I highly recommend) more than a few time, capturing that happening in a note perfect manner.

This public story of Muhammad Ali delves into the many sides of the boxer's life and his ways. His braggadocio as the heavyweight contender against Liston starts right off with his proclamation that he will "fly like a butterfly and sting like a bee." The man had the strength, athleticism and self-confidence to put up rather than shut up and sets the stage for the battles, in and out of the ring, that he will face in the future. Ali was a controversial figure for the decades of his boxing career and Mann, with Will Smith, does a competent job of opening his life during the turbulent decade depicted to those who don't really know that Muhammad Ali was, indeed, "The Greatest."

Muhammad Ali is, arguably, the most renowned person world wide, not just for his prodigious boxing feats like the Rumble in the Jungle and the Thriller in Manila with Joe Frazier, but for his humanitarian ideals, strong principles and dedication to his Muslim faith. It is difficult for a filmmaker, even one as capable as Michael Mann, to capture all of the nuances of such a great man's life, but "Ali" succeeds more than it fails. There are award-worthy performances, particularly Jon Voight as Howard Cosell, and notable techs.