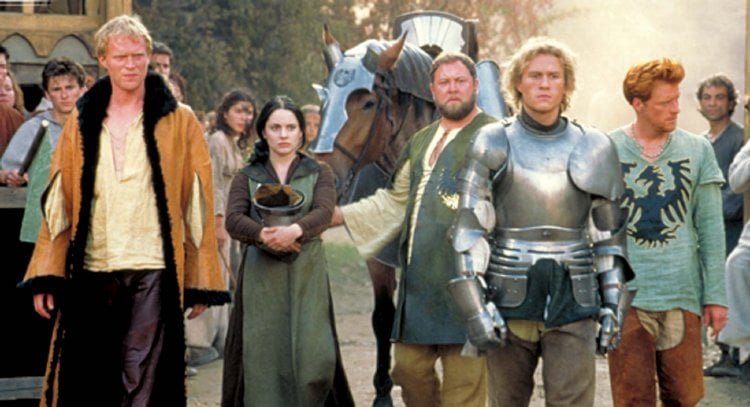 In the days of yore only those of noble birth were allowed the honor of knighthood. The superstar athlete of his day, the knight would compete in mock battle at staged tournaments for the pleasure of the masses. One young man, lowborn William Thatcher (Heath Ledger), defies convention when he impersonates his now-dead liege lord and goes for the gold in "A Knight's Tale."

A young thatcher's son William aspires to the impossible dream of becoming a knight, a title reserved for the noble born. When the adult William (Heath Ledger, "The Patriot") is faced with his liege Knight's death before the final round of a joust, he seizes an opportunity, shielded from questioning eyes by his benefactor's armor in writer/director Brian Helgeland's "A Knight's Tale."

Who would have predicted the writer of "L.A. Confidential" and director of Mel Gibson's "Payback" would make his hyphenate debut with such a risky premise? "A Knight's Tale" is a bold melding of a modern rock score and culture with the medieval jousting tournament circuit of the 14th century. We're thrown into the excitement as Queen's "We Will Rock You" blares, peasants in the stands do a wave and a young wench boogies to the music.

William wins the third round merely by staying on his horse (his knight was ahead in the first two rounds) and amusingly stays undercover by dint of the dent delivered to his helmet by his opponent's lance. William and his starving cohorts Roland (Mark Addy, "The Full Monty") and Wat (Alan Tudyk, "28 Days") quickly convert the prize into fifteen silver florins. After heated debate, William convinces them to invest the money into turning him into a tournament competitor rather than immediately gratifying their stomaches.

One amusing Rocky-like training montage later, the trio make their way towards the next meet, picking up a very nude Geoffrey Chaucer (Paul Bettany, "Bent") along the roadside when he offers to fake William's nobility papers and perform as his herald. Once there, William espies his lady fair, Jocelyn (newcomer Shannyn Sossamon) and crosses the man who will be his arch rival in both love and war, Count Adhemar (Rufus Sewall, "Dark City"). A need for armor repair on account over currency adds female blacksmith Kate (Laura Fraser, "Titus") to William's entourage.

If "The Patriot" didn't catapult Heath Ledger into full fledged stardom, "A Knight's Tale" surely will. Ledger exudes down to earth charm as well as being up to the physical demands of medieval tournament competition. He can also cut a mean rug. Ledger's more than ably supported. Paul Bettany is comically inspired as the scene-stealing, gambling addicted future author of 'The Canterbury Tales.' His hammy, hilarious deliveries of 'Sir Ulrich's' qualifications are one of the film's highlights and his character's weakness provides an opportunity for William to show what he's made of. Alan Tudyk also provides laughs as the fiery redhead whose approach to almost any situation is like a pitbull's. Addy is the more level-headed voice of reason. Laura Fraser quietly makes a strong stand for women's lib. Sewell is a haughty, egotistical cheat, and therefore, a good villain. Newcomer Sossamon has an exotic beauty, but adds little else to the mix.

Helgeland's script has the right mix of humor, action, adventure and sentiment, although a couple of jarring character changes (William accuses his beloved of being a silly girl out of the blue, only to have to win her back; a romance that seems to be percolating between the widowed Kate and Roland is abandoned) may be attributable to editing for run time. He blends pop culture in with ancient history cleverly, usually managing to get a laugh. Kate designs new, more lightweight armor and etches in her 'brand,' which resembles a Nike logo. A courtly medieval dance evolves into present day moves to David Bowie's "Golden Years."

Cinematographer Richard Greatrex ("Shakespeare in Love") along with the film's editor and sound designer make you feel every connection of the knights' lances with their targets. Costume design by Caroline Harris ("An Ideal Husband") mostly works, although Jocelyn's outfits are sometimes too outlandish (one costume featuring a straw bonnet would look more at home at "My Fair Lady's" horse race).

"A Knight's Tale" is rousing fun - it rocks.


Writer/director Brian Helgeland delved into film noire, and earned a screenplay Oscar in the process, with his period crime thriller, "L.A. Confidential." He takes a sharp turn from mayhem to mirth with his latest oeuvre, covering territories that range from medieval fairytale adventure to contemporary pop culture. Mixing period and pop is a hard task that rarely meets with success, though there are exceptions, most involving Shakespeare.

There is an obvious hip ness to the material that is the crux of the juggling act the writer/director is trying to perform. Throughout the film he intersperses modern music and readily identifiable contemporary film and social references that meld the modern with the medieval. We're greeted, at the start of a jousting tournament, with the raucous refrains of Queen's "We Will Rock You" and the Middle Ages crowd of onlookers clapping and stomping and doing waves. It's slick and amusing, though the disparity in periods brings attention to itself as the film plays on.

The routine, oft-told tale of a young commoner striving to be something beyond his birthright, to "change his stars," is a staple for modern storytelling. Helgeland doesn't screw around with the rags to riches structure and concentrates on the exciting action of the tournament events - particularly the high-profile jousting matches - and his characters.

Heath Ledger is the first among equals in an ensemble effort that gives the young actor a chance to showcase himself while others get their chance at the limelight, too. The young Australian made a likable debut in "10 Things I Hate About You" and continues to build upon his good looks and easygoing charm as the ambitious Will Thatcher. Ledger handles the gamut of tasks put before him and acquits himself quite well riding, singing, dancing, sword fighting, and in comedy and stunt work.

The band of misfits accompanying William on his quest are an eclectic collection of affable rogues who are reluctantly drawn in to the young squire's hair-brained, and potentially deadly, scheme. Mark Addy ("The Full Monty") is solid as the serious-minded best friend, Roland. Alan Tudyk plays William's enforcer, Wat, a carrot-topped vassal whose hot-headedness is tempered by his loyalty to his friends. Rounding out William's merry men is a young poet and story-teller named Geoff Chaucer (Paul Bettany), who acts as Williams press agent, promoter and ring announcer, and a pretty blacksmith named Kate (Laura Fraser), a real master of metals. The only problem with these characters and their performances is you don't get enough of them. The rest of the cast is adequate, though Shannyn Sossamon as the love interest, Jocelyn, is pretty but little more than an object of affection - no sparks fly between her and William.

The production is first-class with great attention paid to medieval period details, but with a contempo feel throughout. The big tournie scenes maintain a Super Bowl atmosphere with the audience hyped to a fever pitch as the jousting action mounts. The jousts tend to be repetitive, as expected when two guys try to knock each other off their horses with a big stick, but slickly edited and visually exciting. The behind-the-camera tech team members providing the visuals for "A Knight's Tale" are equal to the director's talent and vision. Cinematographer Richard Greatrex, production designer Tony Burrough, and costumer and armor designer Caroline Harris contribute to the modern/medieval look that Helgeland seeks. The use of modern pop and rock music is handled in an amusing and interesting way, with each tune selected to appropriately fit the scene in which it is used. David Bowie's "Golden Years" is used over a Middle Ages line dance; Bachman-Turner Overdrive's "Takin' Care of Business" plays as William establishes himself as the leader and true friend of his little band; The World Series of tournaments, London, has the dream team come into town under Thin Lizzy's "The Boys Are Back In Town." Each tune works and will please the hipsters in the audience.

Brian Helgeland picked a tough nut in his combo of "Rocky" meets the knights of old yarn and, while not a great film, "A Knight's Tale" does a sound job in putting together the combination. The attractive, likable cast and excellent production values overcome the sometimes overly hip screenplay.