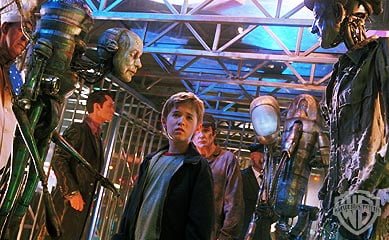 For over twenty years, the late Stanley Kubrick worked on developing "A.I." Initially based on the short story "Super-Toys Last All Summer Long" about a child robot yearning for the love of his human mother, Kubrick extended the tale as a sci-fi retelling of 'Pinocchio.' Having once been told by Kubrick that the project was better suited to his sensibilities, Steven Spielberg took over the reins after Kubrick's death. Haley Joel Osment stars as the boy robot who wants to be real in "A.I. Artificial Intelligence."

Anticipation for "A.I." began with a web campaign built around a murder mystery beginning with fictitious researcher Jeanine Salla. The film, which doesn't touch on these elements, begins with Professor Hobby (William Hurt) explaining the next robotic advancement - a child substitute that can be programmed to 'love' human parents in a society where natural birth is largely restricted. His prototype, David (Haley Joel Osment), is brought home to Monica Swinton (Frances O'Connor, "Mansfield Park") by her husband Henry (Sam Robards, "American Beauty"), hoping to snap her out of the despair she's been in since their natural child, Martin (Jake Thomas, "The Cell") fell into a coma.

Monica's resistant at first, but her need for a child's love soon has her making the irreversible 'imprint' that will bind David to her (after imprinting, these 'mechas' must stay with their owner or be returned to Cybertronics for destruction). David's given Martin's supertoy Teddy (his Jiminy Cricket) and all is well until Martin makes a surprise reversal and is brought home. Martin's competitiveness combined with misunderstandings result in Monica abandoning David (with Teddy), who begins his search for the Blue Fairy which will make him a real boy, regaining his mother's love.

His journey has him cross paths with other, zombie-like, abandoned robots trying to keep clear of the Flesh Fair, where cheering fans watch their like be tortured and destroyed. David's picked up and meets Gigolo Joe (Jude Law, "Enemy at the Gate" - this film's version of Honest John). They escape and travel to Rouge City (evoking both Pinocchio's Pleasure Island and "The Wizard of Oz") where Dr. Know gives advise that lead theme to a submerged Manhattan and David's dreams.

"A.I." is a hybrid that suffers from not being fully Kubrick or Spielberg. The film plays in three parts. The first hour establishes David and his life with the Swinton's and plays very much like Kubrick, slowly paced and quiet, with a slightly ominous score. Reflections are significant, making us question what makes us human when we see David's reflection on the glass over a Swinton family portrait. Futuristic cars travelling through forests recall "A Clockwork Orange." This part of the film is wholly satisfying.

Spielberg begins to peak through in the second segment. While Gigolo Joe and his back story are Kubrickian (by way of "Blade Runner"), the Flesh Fair's flying mercenaries (Brendan Gleeson, wasted) and their spotlights begin the parade of "Close Encounters" visuals (a film where Spielberg featured Pinochhio's theme of 'When You Wish Upon a Star'). The Flesh Fair itself is a half-baked concept, a coliseum for the destruction of broken, flesh less mechas which has more in common with a monster truck rally. A political subtext is hinted at by Gleeson's character, but not enough to make the sequence work.

Rouge City provides visuals which seem inspired by everything from "Metropolis" to "Roger Rabbit." Spielberg links religion to fairy tale when David mistakes a neon Lady of the Immaculate Heart for his blue fairy.

When the duo arrive in Manhattan, Gigolo Joe departs and the film's final third begins. It's here where Spielberg loses his grip with apparent indecision. Not content to leave his film at a natural ending point, Spielberg unsuccessfully plays with multiple concepts involving alien-like evolved mechas, memory and resurrection.

"A.I." represents Spielberg's second screenwriting credit after "Close Encounters of the Third Kind." While his faithfulness to the Italian fairy tale mostly serves him well, clearly he had difficulty resolving the tale. In fact, in this film which recalls so many others, a bit of "Child's Play" would have had Teddy kill off Martin, making for a more economical route to a Spielbergian happy ending. Several nonsensical pieces of plotting had me scratching my head as well - why did Monica drive David out towards Cybertronics, then tell him not to go there? Why did Professor Hobby tell David he'd meet his makers, only to vanish from the story?

Haley Joel Osment once again turns in a performance which belies his years, although a tentativeness keeps him from hitting this one out of the ball park. O'Connor does well portraying Monica's confusion and wrings real emotion in the abandonment scene, but Spielberg betrays her in the film's finale. Jude Law gives a witty reading of sexbot Joe, but the character never feels fully integrated into the story.

"A.I." is certainly more thought provoking than any summer blockbuster we've been presented with yet this season, but it leaves us wishing Spielberg had applied more of Kubrick's obsessive fine tuning.

It's the time of mankind's distant future and all the worries and concerns over global warming have come to a disastrous head. Much of Earth is underwater and the governments have restricted the allowed human birthrate.  Robotics has taken a quantum leap in development and man has created a replicant that can love. But, has man gone too far playing God? Find out in Steven Spielberg's long awaited "A.I.: Artificial Intelligence."

There has been a hush, for months, over details about Spielberg's involvement in what had been a longtime Stanley Kubrick project. The reclusive Kubrick was taken by the concepts introduced in the 1969 sci-fi short story by Brian Aldiss, Super Toys Last All Summer Long, and had been
developing his film treatment for some time prior to his death last year.  Friend and colleague Spielberg took over the mantle of the production, developing the screenplay (from the screen story by Ian Watson) and directing the effort. What we get is a mix of intents as the helmer tries to be true to Kubrick's vision while deriving many parts of the film from his own (Spielberg's) body of work.

A little boy, the son of Monica and Henry Swinton (Frances O'Connor and Sam Robards), is in a coma and there is little hope that he'll awaken. Monica is despondent and growing increasingly withdrawn, forcing Henry to act quickly and decisively. A brilliant robotics professor, Allen Hobby, has developed his theory that robots, or Mechas, can be made to love and Henry gets the first model, named David (Halley Joel Osment). When David is brought into the Swinton household, Monica greats him with a scared reluctance. As she grows used to the robo-boy, she invokes the imprint that triggers his program to love. A semblance of normalcy comes back to their home and all is well - for a while.

The miracle of modern science eventually finds a cure for the Swinton's son, Martin (Jake Thomas), and he returns as the family alpha boy. While Monica treats David as a real child, Martin understands that the Mecha is little more than a super toy. The wily Martin soon figures out how to
confuse David into doing things he shouldn't, making his parents think that the little robot is a danger to the family. Monica, instead of returning David to the factory for destruction, decides the best course is to abandon the boy in a spooky forest to fend for himself.

Part two of the tale shifts from family life to survival as David searches for the one thing that he real wants - to be a real boy. This "Pinocchio" theme drives David into the scrap heap world of discarded robots. He meets Gigolo Joe (Jude Law), a pleasure Mecha that can be anything a woman (and, presumably, a man) wants him to be. Joe is very cool and takes David under his wing. This part turns into a world straight out of "Mad Max Beyond Thunderdome" where robots, instead of men, are ravaged for public entertainment. The final leg of David's journey takes on religious
overtones of resurrection and spiritual freedom as the little boy 'bot finds "himself."

"A.I." is a complex film that strives to say a great deal. Messages of love, loyalty, friendship and more are coupled with David's relentless search, after his abandonment, for the Blue Fairy, who will change him into a flesh and blood boy. Joining him in his quest is a present given by his mom, a robotic bear named Teddy, as the stand-in for Jiminy Cricket. The constant "Pinocchio" references and David's continued pleas to be a real boy gives the film a derivative, rather than original, feel.

The F/X that animate Teddy and the rest of the robots (by Stan Winston Studios) are very slick, as one can only expect in a Steven Spielberg movie. But, as with "Close Encounters of the Third Kind," "A.I." gets too full of itself and meaningfully meanders along, first in one direction, then another until the until we get to the spiritually satisfying (for Spielberg) end. For me, by the time the film was over, I had simply had enough.

Robot movies have been around since "Metropolis" and the robot-with-feelings concept has been with us from as far back as "Pinocchio" - if you take that fairytale as a kind of low-tech robot story.
The idea also spawned such flicks as "Short Circuit," "Terminator 2" and, one of my favorites, "Android," with Klaus Kinski chewing the scenery with gusto. "A.I." represents a highbrow entry into the genre, with Spielberg's typical rank sentimentality at its core.

On the acting front, the film belongs to young Osment, who is the single point of focus throughout this unnecessarily long flick. Haley Joel is a talented kid and does his best, building on the emotions that David develops over time, but there is little arc to the development of the
character. Jude Law, in his limited time on screen, steals the show as the sexy, pleasure-oriented Joe. With a hint of plasticity to his makeup, giving him an artificial look, and his hip dance moves, the robotic gigolo seems to be having a grand time. Brendan Gleeson offers little to his character, Lord Johnson-Johnson, a kind of robotic gladiator owner/manager.  O'Connor, as the confused mom, is fine, but the rest of the cast, including Robards and Hurt, are filling space and marking time.

Production values are commensurate with the obviously large budget that Spielberg and company had to play with. Frequent Spielberg cinematographer, Janusz Kaminski provides his deft camera talents effectively to the challenging variety of film moods. John Williams does not, for once, intrude his musical interpretations on the film, but you don't get anything like the "Jaws" theme song either. Production design, by Rick Carter, comes out of Spielberg's own body of work and others with direct takes from "E.T.," "Close Encounters" and "Jaws," as well as the aforementioned "Mad Max 3" and, frequently, "The Wizard of Oz."

"A.I.: Artificial Intelligence" is an anticipated event film that fails to meet expectations. It's too long, by 20 minutes or more, and the story meanders far too much to keep the viewer's interest.