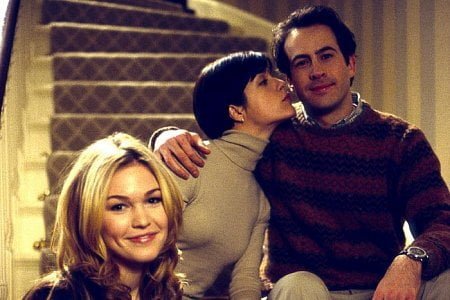 Paul Morse (Jason Lee, "") must have really enjoyed his bachelor party - he's woken up with beautiful Becky (Julia Stiles, "The Bourne Identity") in his bed. Of course Paul wouldn't want his fiancee Karen (Selma Blair, "The Sweetest Thing") to know about this - it's, you know, "A Guy Thing."

Paul Morse (Jason Lee, "Big Trouble ") must have really enjoyed his bachelor party - he's woken up with beautiful Becky (Julia Stiles, "The Bourne Identity") in his bed. Of course Paul wouldn't want his fiancee Karen (Selma Blair, "The Sweetest Thing") to know about this - it's, you know, "A Guy Thing."

Greg Glienna (story, screenplay with Pete Schwaba, Matt Tarses and Bill Wrubel), who wrote the original "Meet the Parents" (not the Ben Stiller/Robert DeNiro adapted one), stays with the pre-nups using the hoary device of an 'about-to-be-married' meeting the person of their dreams as marriage to another looms. "A Guy Thing" struggles for air beneath a heap of unappealing bathroom humor and obvious payoffs to overly foreshadowed punchlines before coming to something resembling life in its second half.

Paul's convinced by his best buddy Jim (Shawn Hatosy, "John Q") not to come clean with Karen as he's unlikely to ever see Becky again. Of course, Becky begins to show up everywhere, including a family dinner at Paul's in-laws-to-be, where she's introduced as Karen's cousin. Paul keeps getting into hotter and hotter water but we know it ultimately won't matter because his young brother keeps singing Karen's praises (to take the sting out of her eventual dumping) and he himself is obviously too delighted with Becky's unorthodox ways.

"A Guy Thing" is at its best when it sticks to its titular subplot and achieves a true comedy moment when a stranger helps out Paul before explaining to an observer that what he just did was 'a guy thing.' While Paul is one of those almost perfect male characters, Jim represents the more typical male and Hatosy is a charming natural in the role. A pharmacy assistant caught in the crossfire of a stale joke turns the tables on a helpless Paul and accepts a catering gig from Paul's mom to be and the third act payoff is almost tasty.

The cast, which also features Diana Scarwid ("What Lies Beneath") and James Brolin ("Catch Me If You Can") as Karen's snobbish wealthy parents and Julie Hagerty ("Freddy Got Fingered") and Michael Teigen as Paul's boorish ones, help divert attention from cliches, although both Lochlyn Munro ("Scary Movie") as Becky's psycho cop ex-boyfriend and Larry Miller as Paul's minister neighbor, embody them. Selma Blair shakes the mothballs off her "Legally Blonde" Wasp as Karen. Stiles engages with her smile.

"A Guy Thing" is a weird hybrid of gross-out humor for the guys and romantic comedy for the ladies that does neither genre justice yet delivers a few unexpectedly good moments amidst the pandering obvious ones.

Paul Morse (Jason Lee) is bored with his own bachelor party and starts trading shots with one of the ladies hired to dance for the groom-to-be. The next morning, wakened by a call from his future mother-in-law, he finds that he is not alone in bed. The dancer, Becky (Julia Stiles), sleeps next to him and now, with fiancée Karen (Selma Blair) on her way over, Paul has to think fast to save his wedding and, more important, his skin in "A Guy Thing."

Director Chris Koch, working with a story by Greg Glienna and screenplay by Glienna, Pete Schwaba, Matt Tarses and Bill Wrubel, makes "A Guy Thing" a better film than it deserves to be. The routine, by-the-numbers script-by-committee story is a typical comedy of errors and lowbrow humor that benefits from a light ensemble performance by the well-assembled cast. Jason Lee, the ostensible lead as Paul, is bland enough to allow the rest of the cast to fill out the space that may have been left empty with a stronger performer as the soon-to-be-married Morse. I had hopes for Lee when I first saw him in "Chasing Amy" but he has been a disappointment until "A Guy Thing." Here his blandness works to the actor's benefit.

Lee's costars, Stiles and Blair, also give ordinary performances and their characters are thinly drawn with Becky the daredevil, free-spirited type and Karen the buttoned down girl whose goal in life is to get married. The free spirit will, of course, free Paul's spirit and guess who ends up with whom? No surprises here. The supporting cast gets to put the humor into the mix with Sean Hatosy making the most out of his character, Jimmy, the groom's best man and party-hardy animal. Veterans such as James Brolin and Julie Hagerty help flesh things out more than the sparse script should allow.

Most of the plot is telegraphed from the start so there are few if any surprises in store. Toilet humor is de rigueur, including an extended bit that highlights, of all things, a raging case of the crabs. Ample use is made of fantasy sequences where Paul imagines the consequences of telling the truth about his escapades. They are amusing but the undercurrent of dishonesty is cumbersome to the lightness of the material. The addition of a jealous ex-boyfriend for Becky, a macho police detective named Ray who harasses Paul and gets his own just desserts in a superfluous sidebar. The gaggle of screenwriters throw anything they can lay their hands on, including an Alice B. Toklas scene at the couple's rehearsal dinner involving gravy, marijuana and a minister.

"A Guy Thing" is not a stretch of the mind in any case but its good nature and likable cast help to raise it above the doldrums.