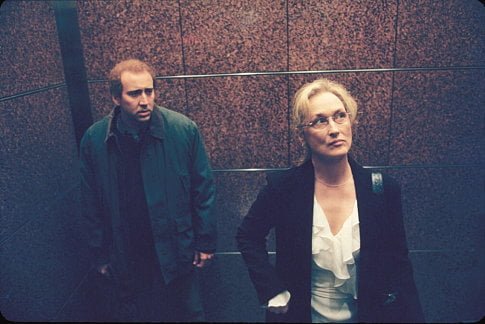 Charlie Kaufman (Nicolas Cage), fresh off of his successful first screenplay with "Being John Malkovich," takes on the complex task of adapting the unadaptable - the stream of consciousness non-fiction book by Susan Orleans (Meryl Streep), The Orchid Thief. But, the job proves daunting as Charlie struggles to find a way to bring the multi-layered story to the screen. He finally has the brilliant idea to bring his own labor and toil into the picture to create a mixture of fact, fiction and fantasy in Spike Jonze's "Adaptation."

Nicolas Cage does double duty as twin brothers Charlie and Donald Kaufman. As chronic worrier Charlie bemoans his lack of inspiration in making a screenplay out of Orchid Thief, his down-on-his-luck but always-cheerful brother Donald begs to be allowed to stay in his apartment until he gets on his feet. Not too bright Donald, motivated by his brother's gig in Hollywood, decides that he, too, shall write a screenplay of his own - about a schizophrenic serial killer who is also the cop assigned to hunt himself down. As his twin blasts through his script and gets serious Tinsel town attention, Charlie fails to get a handle on Orleans's self-involving story about John Laroche, the colorful title character of her book.

As Charlie unravels the complex relationship between Laroche and Orleans, whose book tries to unravel the mind of the subject character, he becomes mired and confused on just how to tell the story. After going through reams of paper and months of effort, Kaufman has nothing to show his producers. He sinks into despair and battles with his writer's block until he has an epiphany - interweave his own problems into the screenplay about adapting a book he finds impossible to adapt. The result is a wild, complicates story with many layers, moods and feelings.

The film "Adaptation" is structured on three levels - the story of the man, John Laroche, an intelligent rebel who has tried his hand at everything (mostly illegal) from collecting undersea creatures to poaching rare orchids from protected areas to running an internet porn site; the tale of Susan Orleans and her initial New Yorker magazine article about Laroche and the struggles and emotions she experienced with the man while adapting her article to book length; and, Charlie's own plight (with brother Donald providing a fresh-faced, funny attitude about life as the comic relief). The wonderfully complex tapestry of (the real) Charlie Kaufman's script weaves these threads together into a true filmic experience.

Nicolas Cage, in his dual role, gets a chance to shine in his best performance since "Leaving Las Vegas." His characters are distinctly different in personality and temperament. It doesn't take long, as Charlie and Donald work and live in the same space, to forget that you are watching the actor and believe in the characters he creates. Where Charlie exists in a fog of despair all the time, Donald lives in the basking warmth of the rays of life's sun. Cage is a short-list candidate for considerable award attention in his no-holds-barred perf as fat and bald Charlie and Donald. They are two sides of the same coin and Cage plays them both with great skill.

The two main supporting players, Cooper and Streep, are first-rate as Laroche and Orleans. Chris Cooper in particular proves once again that he is one of America's finest character actors as he delivers nuance in his portrayal of the orchid thief, Laroche, and gives depth to the man. Even with his front teeth knocked out, Laroche is still an attractive man and lustful adventurer who grasps an object of his interest with dedicated passion only to drop it like a hot potato when something else peaks his fervor. Meryl Streep takes a step back from her usual commanding screen presence and lets her leading men have the limelight but is convincing and 3-dimensional as Susan. Tilda Swinton and Maggie Gyllenhaal, in small supporting roles, are background characters only.

Writer Kaufman hits another home run with one of the most imaginative, intelligent and witty scripts of the year. The lines blur and redefine constantly as the story bounce back and forth through a period of years, showing John and his poaching pals, Susan as she unravels John's story, Charlie and his plight and back again to John. The main thread of Charlie coping with his block is the underlying theme, though, and Cage anchors the film with it. Kaufman also uses the maguffin of the mysterious "ghost orchid" as a hook into the psyche of Laroche but also as a tool to inform the viewer of the nature of the species, its exotic appearance and its appeal to the passionate collectors. This is one richly crafted screenplay.

Sophomore helmer Spike Jonze follows up his successful first feature with a work that shows that he is a talent to be reckoned with. He handles Kaufman's script and its richly drawn characters and puts you into the mind of Charlie and gives an intimate look into the obsession of Orleans as she learns about and falls for John. Jonze deftly weaves the colorful and interesting story threads written by Kaufman with his talented cast and brings it to quirky life on the big screen.

"Adaptation" is a film buff's dream.