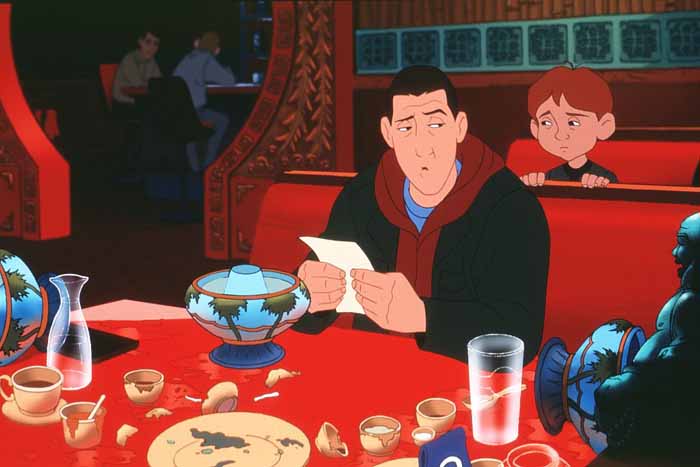 Davey Stone (Adam Sandler) is Dukesberry's drunken delinquent, a loner whose vandalism on the first night of Hanukah so exasperates the town judge that he sentences Davey to ten years in the slammer. The town's elderly part-time basketball ref, Whitey (Adam Sandler), intercedes and convinces the judge to let him take responsibility for Stone. Stone's hardly grateful and Whitey's in for "Adam Sandler's Eight Crazy Nights."

Adam Sandler grows increasingly frustrating combining his odd mixture of true heart and sweetness with juvenile vulgarity that may even put off his target audience in this, his first animation. For every laugh or smile Sandler genuinely earns he doles out a bit so nasty it is cringe inducing. This is one psychotic holiday entry.

Stone taunts Whitey, who's seriously height challenged and has one man's size 11 and one boy's size 9 foot, mercilessly, but Whitey doesn't become truly upset until Davey harms someone other than himself, stealing peanut brittle from a mall shop Whitey frequents. Big-hearted Whitey relents once again, though, when Davey's trailer is burnt to the ground and invites him to stay at his house which he shares with his fraternal twin Eleanor (Adam Sandler). Meanwhile Davey shows a giving attitude to shy Benjamin (Austin Stout, "Matilda") on the b-ball court, perhaps because his single mom is Davey's childhood girlfriend Jennifer (Jackie Titone, Sandler's real-life fiancee). Then Whitey and Eleanor discover the cause of Davey's miserable existence and their sympathy makes him lash out, telling Whitey that he has no chance of winning a civic award because no one in town notices him. Another bender and Davey's broken his parole, but maybe he's the only one in town that understands the true meaning of the Christmas/Hanukah holidays.

Besides the obvious drunk and reckless behavior exhibited by the main character, the film also treats us to a man shook up in a porto-potty, deformities, excessive body hair and a real groan-inducer about a man putting his thumb where the sun don't shine in his sleep. A small group of deer who act as guardian angels are featured grinning with, no not spinach, but human feces between their teeth. Somehow I can't imagine even a twelve year old boy finding humor in this.

And yet the film has things to recommend it. Davey Stone's redemption has a heartwarming effect on his entire town. The animation is good, if nothing revolutionary. Sandler may not be the most astute vocal actor, but his singing voice is strong and the movie features several songs, including an updated version of "The Hanukah Song" over the closing credits and the somewhat amusing "Technical Foul." The film's climax has an entire whitebread town breaking into traditional Jewish dance to "Bum Biddy." This is also a film whose ghosts of Christmas Past include KB Toys' toy soldiers, a Victoria's Secret peignoir, the Footlocker referee and the panda from China Express (and oddly, this in-your-face product placement works in a weird way).

Adam Sandler's heart may be in the right place, but he needs to pull his head out of his butt. "Adam Sandler's Eight Crazy Nights" has too many fouls and not enough slam dunks.

(The film is preceded by a short live-action film, "A Day with the Meatball," about Sandler's semi-famous dog. This is pretty cute, but why oh why subject us to Meatball soiling the carpet?)