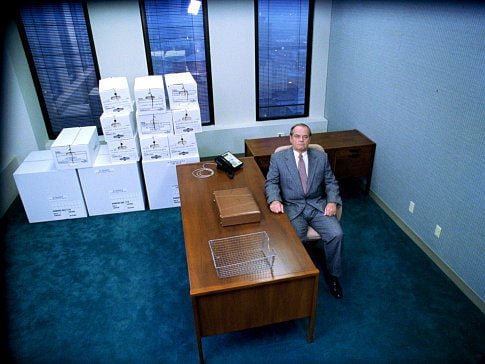 Warren Schmidt (Jack Nicholson) faces mandatory retirement from the Woodmen Insurance Company after over 30 years of loyal actuarial service. Now, he must endure his twilight years in an unhappy marriage with his nagging wife Helen (June Squibb). His daughter, Jeannie (Hope Davis), is engaged to Randall Hertzel (Dermot Mulroney), a man that Warren deems unworthy of his only child. When Helen suddenly dies, Schmidt decides that he must save his daughter from disaster and he heads out in his Winnebago to stop the wedding. But he didn't count on Randall's extrovert of a mother, Roberta (Kathy Bates), in "About Schmidt."

Director Alexander Payne, on the heels of his successful "Election," takes a different direction, with co-screenwriter Jim Taylor, in this character study of a man whose life has proven unfulfilled. Warren has worked all his adult life for Woodmen's and his only contribution has been to estimate, with such info as lifestyle, diet and age, when his clients will die. Forced out of his job by the new blood in the company, Schmidt is at odds on what to do with his remaining years. He and Helen purchased a huge Winnebago with the plan, when he retires, to travel around the country in their mobile home, but his prospect is less than enthralling to Warren.

As Schmidt copes with his newfound leisure time and his full time exposure to Helen he seeks some other outlet to take up his days. He goes back to the insurance company to volunteer his services but is told that all is well, being nicely informed that he is not needed. As he is leaving, he sees all of his carefully prepared files sitting forlornly on the loading dock, apparently being shipped to the company archives and not of any use to anyone. While watching TV, one day, he is drawn in to an infomercial for the "Child Rescue" charity organization, a group akin to C.A.R.E., and adopts, for as mere $22 a month, a little African orphan boy named Ndugu. Warren writes to his new ward and uses his letters as a catharsis for his conflicted emotions about his wife, daughter Jeannie and his new life. Then, Helen suddenly and unexpectedly dies.

This is where "About Schmidt" takes on a serio-comic attitude that shifts from drama to humor at the blink of an eye. Warren, at a loss with what to do with himself now that he is alone, has the brilliant idea to make an impromptu visit to Jeannie and "help out" with the wedding plans. His daughter is less than thrilled with the prospect. When he does arrive, he stays with Roberta Hertzel and the combination of his future son-in-law and his mother prove too much to take and Warren tries to stop the marriage - in vain.

The screenplay by the director and Jim Taylor is an amusing combination of drama and humor, but the humor aspect detracts from the moving drama as Schmidt unsuccessfully copes with the problems he is presented: his unsatisfying retirement, the sudden loss of Helen and the unwanted marriage of Jeannie. This is all serious fodder and Nicholson put the appropriate solemn spin to the dramatic aspects of the story. Things shift to the humorous, especially with the introduction of Roberta Hertzel into the mix. Oscar-winner Bates chews up the scenery and spits it out as she controls the upcoming wedding and everyone's involvement in it with an iron hand, much to Schmidt's chagrin. Warren is speechless, for example, when Roberta tells him how she breast fed Randall until he was five years old then brags how well he turned out because of it. These jumps between the serious and the whimsical takes away the film's impact in both cases.

But, "About Schmidt" is an actors' film. Jack Nicholson gives one of his best performances in years, superior, I think, to his Oscar winning perf in "As Good As It Gets." The unspoken washes of emotion that cross his face, from exasperation with wife Helen, to frustration over Jeannie's marriage decision, to shocked amazement over Roberta, are wonderfully complex and different. The comb over on his balding pate is a character unto itself and helps to reinforce just what Schmidt is to good effect.

Kathy Bates gives an outstanding, over-the-top performance as the earthy, outspoken and naughty Roberta. She takes it to the line, especially during an outrageous hot tub scene (in which Nicholson's Schmidt is palpably shocked and stunned) and creates a complex, demanding character. Roberta adores her son and, equally, disdains her ex (Randall's father), Larry (Howard Hesseman in a small but effective performance as a man who suffered through his marriage under her all-controlling thumb).

Dermot Mulroney is quite the riot as Randall, with his thinning hair, shoulder length mullet and none-to-bright but affectionate demeanor. He plays the part well so you believe that Warren would reject him as not worthy of Jeannie. Hope Davis is two dimensional as Schmidt's daughter but this seems to be the way the character is written.

Alexander Payne works extremely well with his cast and garners good performances across the board. Behind the camera work is competently handled.

"About Schmidt" does best with its character study of Warren and his plight in coping with the problems of retirement, death, loneliness, betrayal and more. Kudos to the cast.