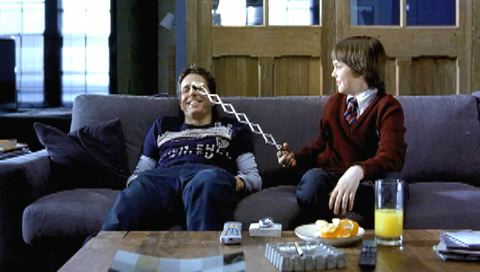 Will Freeman (Hugh Grant) is more than a confirmed bachelor - he believes all men are islands and he's a sun-drenched tropical one hoping to attract Swedish female tourists. When he sinks so low as to make up a child in order to hit on single mothers at SPAT (Single Parents All Together), he's rewarded by being thrown into the life of Marcus (Nicholas Hoult), an awkward adolescent with a suicidal mother in the screen adaptation of the Nick Hornby novel, "About a Boy."

Freeman is the first to admit he's shallow. When asked by married friends to be godfather to their new daughter, he replies that he'd be likely to take her out and get her drunk on her 18th birthday, then attempt to shag her. He decides to target single moms after discovering how easy it is to disengage from those relationships.

Suzie (Victoria Smurfit) turns out to be the only real SPAT prospect, and on their first date, a picnic, she not only brings her own toddler, but the adolescent boy of friend Fiona (Toni Collette, "Changing Lanes"), who's going through a tough time. The date ends in the emergency room after they return to find Fiona a suicide attempt. Will awkwardly tries to comfort Marcus with false platitudes, but then Marcus turns the tables by calling him on them when Will's all but forgotten the incident.

When sparks don't fly between Will and Fiona, Marcus continues to show up at Will's door. The two bond over British game shows and plain old face time, with Will realizing that Fiona gets what she needs from Marcus, but doesn't provide well for her boy's needs. Marcus, in essence, forces Will to grow up and take responsibility for someone. Ironically, this puts Will back into the same position he was in when we met him - lying about having a child - when he meets the woman of his dreams, Rachel (Rachel Weisz, "The Mummy Returns")

"About a Boy" establishes Will and Marcus by intercutting between their lives until it brings them together. Young Nicholas Hoult immediately gains our sympathy. He's terrified of being abandoned by his mother, which makes him brave enough to speak up about the important things, while being a pushover about the things most other kids care about. It's the lack of these kid things - cool sneakers, the right music for the school talent show - that Will can supply. Grant is certainly amusing, but the very hollowness of the character he plays keeps him at arms length. He's not really a good guy, yet never really awful either, making the film a bit anemic overall. When he's forced to admit to Rachel that he's a blank, one can only agree.

Collette dives into the role of 'Miss Granola Suicide' and has never been more unappealing. We're never really sure what she's so depressed about and her self-absorption is off-putting (although necessary in order for Will to develop). This is a compliment to the actress, who gets the hippy thing down pat with all its attendant unattractive qualities. Young Augustus Prew is notable as a fashionable punk, Ali, who towers over Marcus, but doesn't dismiss the persistent pup as the other cool kids do.

Technically, the film looks good. Neighborhoods are established and characters inhabit their environments well (the Weitz' couldn't move their actors within a scene to save their lives in their last effort). Music is a continuous theme throughout the film, with Fiona favoring out-of-date songs of her youth and Will not only being up to the moment, but having good taste as well. Unfortunately, when Will painfully accompanies Marcus in "Killing Me Softly" at a school talent show, what should have been a climatic comic highlight is allowed to go on too long.

"About a Boy" is truth in advertising - Hoult holds this together with Grant as his sidekick.