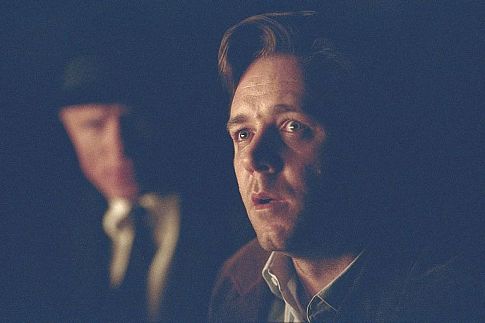 John Forbes Nash Jr. (Russell Crowe, "Gladiator") was quirky, socially inept, egoistical and a mathematical genius at Princeton University in 1947. His paper on game theory, developed observing his peers pursue a blonde, challenged ideas established for 150 years. He triumphed again a few years later when one of his MIT students, the beautiful Alicia Larde (Jennifer Connelly, "Requiem for a Dream"), falls for and agrees to marry him. Her love is the only thing that keeps his genius afloat when he's diagnosed with schizophrenia in director Ron Howard's "A Beautiful Mind."

Director Howard is sure to finally gain an Oscar nomination for this, his most stylish film to date. Emotionally resonant and featuring outstanding performances, "A Beautiful Mind" is one of 2001's best films.

The film begins in 1947 on the Princeton campus, where Nash is established as an oddball genius out of left field (West Virginia in fact). Obsessed with patterns, Nash recreates the design of a classmate's tie reflecting light through glass and charts the movements of pigeons as they vie for food. Challenged to a game by nemesis classmate Hansen (Josh Lucas, "The Deep End"), Nash is shocked and becomes churlish upon losing, insisting the game must be flawed. Only his roommate Charles Herman (Paul Bettany, "A Knight's Tale") is able to extend any sympathy or understanding, frequently luring Nash away from his studies for a pizza and beer break.

After his breakthrough paper and years at Princeton, Nash accepts a post at M.I.T., which requires some teaching - a chore he considers a waste of time. Instead Nash becomes enthralled with the top secret research assignment he's given by shadowy government agent William Parcher (Ed Harris, "Pollock"). Herman arrives on the scene with an English post at Harvard and his orphaned 8 year old niece Marcee (newcomer Vivien Cardone), and loner Nash once again has a social life.

Meanwhile, student Alicia has initiated romance (she's one of the few entranced by his mind and not turned off by his blunt words) and captivated Nash and the two wed, against Parcher's warning that Nash's potentially dangerous work is better suited to a single lifestyle. No sooner has Alicia become pregnant, than Nash is involved in a dangerous shootout. When he tries to leave the project, Parcher threatens exposing him to the Russians, and the stress of the situation results in the breakdown that will lead doctors to a diagnosis of schizophrenia. Only Alicia's strength and love will help Nash regain a life.

How ironic that Russell Crowe won his Oscar last year for "Gladiator" when he preceded that with a superior performance in "The Insider," and now tops that with his John Nash. While initially, his performance seems too twitchy and tic-oriented, he quickly gets into the man's skin and disappears. He walks the line that makes his character brusque and aloof, yet fascinating enough that it's believable a beautiful woman would be interested in him. Every emotion, from panic to bemusement, through arrogance and humility is brilliantly executed as his character ages almost fifty years.

Equally good is Jennifer Connelly, whose love is always challenged but ultimately rewarded. Each period of their relationship makes new demands of the actress and she meets them head on in a fearless performance. Paul Bettany gives another charming turn as Nash's only true friend while Josh Lucas' Hansen is given a surprising character arc that the actor grows along with. Adam Goldberg ("Saving Private Ryan") makes a quiet impression as a Princeton alumnus who becomes Nash's assistant and Alicia's confidante.

Ron Howard has delivered his masterwork in "A Beautiful Mind."

Based, in part, on the biography of the life of Nobel Prize winner John Forbes Nash, Jr. by Sylvia Nasar and, in part, on the imaginings of screenwriter Akiva Goldsmith, director Ron Howard brings us the story of one man's struggle to overcome debilitating schizophrenia in "A Beautiful Mind."

In 1947 John Nash ((Russell Crowe) entered the graduate program for mathematics under Princeton University's most prestigious fellowship. The young genius, often said to have "two helpings of brains and a half a helping of heart," knows nothing of social niceties and feels he is too smart to have to attend class. In fact, he is obsessed with just one thing: finding a truly original idea. One night, while out with his classmates at a local bar where a stunning blond grabs their attention, Nash establishes a game theory on competition that contradicts 150-years of doctrine first set forth by the father of modern economics, Adam Smith.

Nash's theory paper earns him kudos in his field and a coveted research and teaching position at MIT. One of his students is the beautiful and brilliant Alicia Larde (Jennifer Connelly), a physics student who proves that she can teach her teacher a few new tricks - like falling in love. They soon marry, but John cannot tell his new wife about his top-secret work under the watchful eye of a mysterious government agent, William Parcher (Ed Harris). The secret work and its subsequent pressures build up in Nash, uncovering latent psychological delusions that are eventually diagnosed as paranoid schizophrenia.

At this point, the film begins to blur so that you begin to question what is reality and what is delusional for Nash. Parcher convinces Nash that he is working on an extremely sensitive and dangerous decryption of a Soviet plot to undermine America's democracy, a plot that he cannot tell Alicia about. John's underlying psychosis grows to unmanageable proportions and the lines between reality and delusion begin to cross as his hallucinations take control of his life every waking hour. The strain on his marriage threatens to break the couple apart but Alicia's unwavering love and faith in Nash helps to keep him together. He soon begins to understand the nature of his mental illness and, while he is never cured of his hallucinatory behavior, eventually his delusions "have given up on me." The arrogance and mental superiority he experienced when younger takes a back seat as Nash learns to live in a world of normal people. His life lessons, his struggle to survive his dementia and his sheer force of will allow his game theory to earn him the prestigious Nobel Prize. More importantly, he learns how to be a normal man in a normal world who, in the end, earns the respect and admiration of his colleagues.

When Crowe first comes on the screen as the younger Nash, he is wrought with ticks and mannerisms that put me in mind of Dustin Hoffman in "Rain Man." I almost expected Nash to declare, "I'm a very good driver," to the camera. As the film progresses, these manners smooth out a bit and stop calling attention to themselves and the actor begins to put a unique spin on his character. You soon stop seeing Crowe, the actor, and begin to appreciate the life of John Forbes Nash, Jr., the man. It is such a superior performance that I fervently regret that Crowe was given such high praise for a much lesser role in last year's "Gladiator." I lamented his being awarded the Oscar for his sullen Roman general, especially since the actor is not likely to garner the award two years in a row. After all, he is not America's sweetheart, Tom Hanks, and his prima donna attitude may well work against him. But, it is still one of the premier performances this year and will, deservedly, earn the actor much praise.

Jennifer Connelly may finally get award notice for her performance as Alicia Nash. The pretty young actress was overlooked for her tough-to-take role as a forlorn drug addict in last year's "Requiem for a Dream," so it is pleasing to see her go to the boards once again. Her perf could have been lost in a routine loyal wife portrayal, but Connelly puts depth and nuance into Alicia that makes the woman a strong, loving, three-dimensional person.

The rest of the cast, while not given the meaty characters of the film's stars, still gets some spin from their perfs. Ed Harris is ambiguously frightening as government spook Parcher. You never know if the man is real, a delusion or both as he drives Nash to the brink of insanity and beyond. Paul Bettany ("A Knight's Tale") gets a chance to make a small splash as Nash's Princeton roommate, best friend and hallucination Charles. Also joining Crowe and Connelly are such longtime movie luminaries Christopher Plummer and Judd Hirsch. The stars, though, are the masters of "A Beautiful Mind."

Techs are solid all around. Ron Howard crafts one of his best films to date with an assured directing hand. Akiva Goldsmith captures the essence of Nash's life without trying to simply recreate the biography by Nasar. Roger Deakins, on the heels of his Oscar nom for cinematography for "O Brother, Where Art Thou?" provides the expected visual excellence he is known for. Costuming, by Rita Ryack, captures the 40's, 50's and 60's periods expertly, especially for the vivacious Connelly. The makeup job for Crowe as the aging Nash is convincingly realistic without calling attention to it.

"A Beautiful Mind" is also the story of a man who gains a beautiful heart, too, mainly through the love and loyalty of his wife. Nash accepts and overcomes his schizophrenia, with Alicia's long-term support, and becomes a humble, though still incredibly intelligent, human being. It is a thought provoking study of mental illness and the struggle to overcome it.