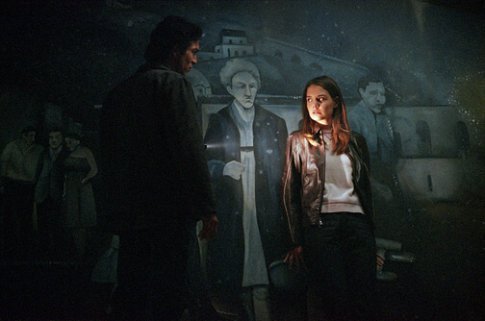 Katie Burke (Katie Holmes) is pretty, smart and on the verge of graduating college. The pressures of academic life weigh heavily upon her and the suddenly rekindled investigation by the police into the disappearance of her wealthy boyfriend Embry (Charles Hunnam), missing without a trace for two years, increases the burden. Then, she begins to catch glimpses of her old flame around campus and Katie is confronted by both her past and her future in "Abandon."

Recovering alcoholic Detective Wade Handler (Benjamin Bratt) is assigned a two year old missing persons case to get back on track. Embrey (Charlie Hunnam, BBC's "Queer As Folk"), an extremely wealthy, charismatic, rebellious artist vanished from Camden College leaving behind unused airline tickets and an untouched trust. Handler finds his last girlfriend, top-of-her-class senior Katie (Katie Holmes, "Wonder Boys"), who begins to have problems sleeping and completing her thesis. She also thinks she's being watched by the one man who caused her to act with "Abandon."

Stephen Gaghan, the Oscar winning adapter of "Traffic," writes and makes his directorial debut with this campus mystery that begins intriguingly before tripping itself up on genre cliches. A good cast is hung out to dry on the fledgling director's words, although two supporting players score despite all.

Katie's buffeted by a group of loyal friends, including Harrison (Gabriel Mann, "Things Behind the Sun"), the one man who made Embrey jealous but whom Katie only sees as a buddy. Still, they help Wade discover that she was deeply hurt when Embrey abandoned her, just like her father had when she was a child. Katie finally tells Wade that she's been seeing Embrey around campus because she's afraid - something which makes little sense on the surface - then makes a pass at him. Harrison makes his feeling known, then he vanishes just as Katie and Wade's relationship begins to heat up and she completes her thesis.

Holmes' film work has been promising, and initially she holds her own, but Gaghan puts unbelievable words into her mouth during a high-powered job interview, then throws her into an utterly unconvincing romance simply because his script has pointed out multiple times that she's irresistible to men (so much so that they seem inclined to leave her). While Bratt at least gets away from the plastic personas he's dragged through Sandra Bullock comedies, the romance is an even iller fit on him. Hunnam is an interesting presence (mostly in flashback), suggesting Jim Morrison crossed with Heath Ledger, while Mann ably projects the opposite - an earnest young man blinded by love.

Still, there are only two performances that are really of note in this disappointing thriller. Zooey Deschanel ("The Good Girl") gives a terrifically entertaining turn as Katie's down to earth roomie while Melanie Lynskey ("Heavenly Creatures") goes out on a limb with a twisted interpretation of a mousy girl as the gnome of Camden's stacks. Will McCormack shows personality as one of Katie's buddy trio, but Gabrielle Union ("Bring It On") is bland. Tony Goldwyn has a small role as an unprofessional guidance counselor.

Matthew Libatique's ("Josie and the Pussycats") photography is fine, frequently framing the heroine left of center. Music by Clint Mansell is a plus, wandering from a "Rosemary's Baby" meets "The Valley of the Dolls" theme to electronic musings and industrial undertones.

The biggest shock here is Gaghan's writing. One would think that the adapter of "Traffic" would know that swilling vodka shots, as Katie and her cronies do during a dorm blast, would be unlikely to produce a psychedelically 'connected' state while watching strobing blacklights, yet's that's what the group ends up doing. Katie tells Wade about a meeting with Embrey at his country house, yet Wade never makes a move to go there - instead he heads to the dark and dripping basement of a campus building set for demolition. Katie softens her blow to Harrison by telling him 'You're kind and organized...'

"Abandon's" ending is confused, with fantasy, flashback and flash forward mixed up with a major plot MacGuffin. The final scene is well chosen, except for it's horrifying suggestion of a sequel.

The title is apt, as in "abandon all hope," for this non-thrilling psychological thriller. Katie Burke is at the point in her young adult life where her academic studies are about to end and her career-oriented future is beginning to unfold. She is working on her final thesis and has hot prospects for a job in the banking industry, but she is plagued by anxiety and depression as the pressure of school bear down on her. When police detective Wade Handler (Benjamin Bratt), a man troubled by his own personal demons, is assigned to reopen the case of the disappearance of Embry Larkin, he becomes captivated by Katie. Her anxiety about school and career prospects push her into a state of depression, then she begins to see her former beau outside the classroom, in the parking lot or driving around in his vintage Citroen.

This is all well and good as we watch Katie's life unravel and Embry appear to be making a sinister reintroduction into her life at a time when Detective Wade is creating his own emotional inroads. The story by helmer Stephen Gaghan, suggested by the book Adam's Fall by Sean Desmond (the suggested bit should have given me pause), starts off with a dark, ominous tone. Unfortunately, the suspense begun at the start gets muddled as we are presented with a series of plot lines: the burgeoning psychological problems and pressures facing Katie; the unexpected return of Embry after his long disappearance; the troubled life of recovering alcoholic Wade Handler; the sudden vanishing of Katie's almost-a-boyfriend Harrison (Gabriel Mann); and, the random appearances, with disturbing overtones, of library maven Mousy Julie (Melanie Lynskey).

I knew there were problems with "Abandon" when I started wondering about the time. When I was sure this thing was nearly over I found that there was still 30 minutes left to play out. This isn't good for a 90+ minute movie, especially when you figure out the what's going on well before the end. There is also gratuitous titillation as Holmes, obligingly, strips to a bra, at one point, and panties, at another, to garner the attention of the young male crowd this film hopes to attract. This may be a good thing for the youth demographic as this so-called thriller has few thrills as it confusedly telegraphs its intent. Cheap tricks like mysteriously missing players (who reappear later with silly excuses) and obvious deep-seated psychological problems suffered by Holmes's Katie are supposed to keep you guessing (they don't). The inane device of a romance between Katie and the detective is out of place except to feed the obvious story line.

After seeing "Abandon" I wondered what the Desmond novel had to say. Maybe he abandoned the project when he read the screenplay (a surprisingly huge disappointment from Gaghan considering his Oscar-winning screenplay for "Traffic"). In the end, I felt cheated.