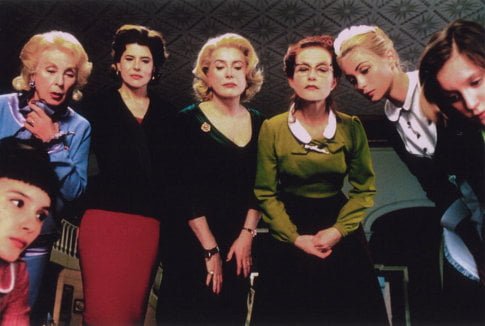 Gaby (Catherine Deneuve) arrives home one snowy day at her French countryside estate with her daughter, Suzon (Virginie Ledoyen), just returned from school. Husband, Marcel (Dominique Lamure), is apparently sleeping after a long night of work while the rest of the female members of the household come together downstairs. When the chambermaid, Louise (Emmanuelle Beart), tries to awaken her master she is confronted with his body and a large knife sticking from his back! Suddenly, snowed in and the phone line cut, the women suspect and confront each other over the murder in "8 Femmes."

French director Francois Ozon has developed a reputation as an enfant terrible of contemporary Gallic cinema so his latest oeuvre, "8 Femmes," reps a radical departure from his usual, dark-edged films. With his screenplay (with Marina de Van) he collects the cream of the French actress crop - including, besides Deneuve, Beart and Ledoyen, other such notables as Isabelle Huppert and Fanny Ardant - to perform in his farcical murder mystery, tragic-comedy musical.

Once the death of Marcel is revealed it becomes apparent that someone among the eight women is the perpetrator of the deadly crime. As the film unfolds, we find out that each has a motive, to some degree, for offing the family patriarch. The motives and the individual webs each lady weaves are the crux of the story and are better left for the viewer to enjoy when seeing the film. They all do have a motive, except for one, and the film is a whirlwind of guesses and counter-guesses as each femme exonerates herself and points fingers at the rest.

The characters in this large ensemble piece, combined with the lightweight whodunit material, are necessarily no more than two-dimensional. But, this two dimensionality gives some of the actors the chance to build amusing, sometimes ruthless caricatures for their characters. Best of show is Isabelle Huppert as spinster sister Augustine. The actress portrays the poor relation as a pinched, insolent cynic who believes in her heart ("problems" with which she uses as an excuse to sponge off of her wealthy sister Gaby) that she was given a raw deal in life. Huppert, with her hair in a tight bun and wearing unflattering glasses, belies the glamorous characters she so often plays and is way over the top as Augustine.

Coming in a close second to Huppert is Fanny Ardant as Marcel's independent-minded sister, Pierrette. Ardant puts a hard edge, with glamour, on her character and harkens back to such 50's bombshells as Ava Gardner and Lana Turner. There is a confident sauciness in Pierrette that makes Ardant stand out among her talented fellow players. Emmanuelle Beart, as haughty housemaid Louise, should also be singled out for her layered performance as a servant that resents her station in life and, in particular, her mistress, Gaby.

French icon Deneuve is about at the end of her tether as the glamour goddess of cinema. While still a beautiful lady, she is developing a matronly stature that should be a signal to the actress to make a change in her acting path, a la Simone Signoret and Ingrid Bergman - both of whom did some of their best work after dropping out of the glam market. Danielle Darrieux, as the wheelchair bound senior family matriarch May, has some great comic moments and is full of surprises as she, too, has a motive for murder. The rest of the cast - Ledoyen as eldest daughter Suzon, Ludivine Sagnier as youngest sibling Catherine, and Firmine Richard as longtime housekeeper (with, of course, her own secrets) Madame Chanel - all lend their talents to the ensemble.

Ozon creates a retro film that resonates with qualities and concepts that harkens back to the 50's and 60's. The drawing room farce, with all its characters and whodunit subterfuge, keeps things moving along at a good pace (but takes a little too long to get to its point). He also punctuates the film with song and, sometimes, dance, as each of the title characters gets to belt out a tune that suits the demeanor of each character. It's a quirky device that works to varying degrees, with Beart and Ardant getting the most mileage out of their individual musical numbers.

Techs are solid with particular note made for the fabulous costume design by Pascaline Chavanne. The various outfits dressing the ladies gives the film its most strong period influence that places the action, in a vague way, sometime in the 50's or 60's. The reliance that all the women have on Marcel fits the era when the man of the house was the breadwinner and the women maintained a pecking order of dependence on him.

Not since George Cukor's 1939 classic "The Woman" has an all female cast dominated the screen with such unique, tres femme personas. (OK, Dominique Lemure, the sole man in the cast, does appear briefly but I don't think he utters a word.) "8 Femmes" allows every character to come to the film's forefront at one time or another and makes this an offbeat pleasure to watch.