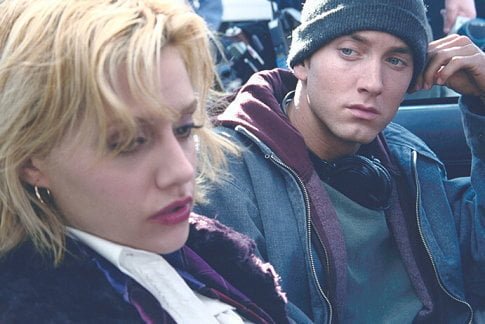 Future (Mekhi Phifer, "O") knows his buddy Jimmy Smith Jr. (Eminem) has a genius for rap but Jimmy has to prove it to the people of the streets before he can aspire to cross the Detroit boundary that separates the haves from the have-nots known as "8 Mile."

Producer Brian Grazer ("A Beautiful Mind") combines his passion for hip hop with a prestige director (Curtis Hanson, "L.A. Confidential"), a music superstar and a Rockyesque genre script (Scott Silver, "The Mod Squad") for a solid commercial outing. "8 Mile" isn't a great film, but it is a custom vehicle for a kinder, gentler Eminem and his music.

We first find Jimmy backstage at hip hop club The Shelter, throwing up at the prospect of a 'battle,' where two rappers diss each other until one is approved by audience applause to move to the next round. Jimmy's just broken up with Janeanne (Taryn Manning, "Crossroads") and is living out of a trash bag stashed behind a dumpster. Called to the stage by Future, Jimmy chokes against reigning rapper Papa Doc (Anthony Mackie). With his tail between his legs, Jimmy returns home to his unemployed trailer park mom (Kim Basinger, "L.A. Confidential) who's currently in an abusive relationship with Greg (Michael Shannon, "High Crimes") which threatens both her and Jimmy's much younger sister, Lily (Chloe Greenfield).

Jimmy's faced with multiple warring factors. He tries to hold down a job in the face of junkbox transportation and an unfriendly supervisor. His friends Future, Sol (Omar Benson Miller, "Sorority Boys"), DJ Iz (De'Angelo Wilson, "The Antwone Fisher Story") and Cheddar Bob (Evan Jones) dream about their group Three One Third getting street cred while neighbor Wink (Eugene Byrd, "Lift") dangles promises of studio time and fame to Jimmy as a solo act. New love interest Alex (Brittany Murphy, "Don't Say a Word") represents a way out while Janeanne is home. Mom is encouraging when things are going well for her, abusive when they're not. Of course, Jimmy overcomes all by taking his own path.

The screenplay is basic, but does offer a few nice touches. We first hear Eminem rap with a self-mocking reinterpretation of "Sweet Home Alabama." Social commentary is made via the character of DJ Iz, a budding activist. The dimwitted Cheddar Bob, who seems destined to cause a great tragedy, instead becomes an unlikely muse for Jimmy's rap. On the flip side, the final scene is staged like a boxing match, the new love interest is defined by a few conversations and an illicit quickie and Jimmy's defense of a Black gay man smacks of image rebuilding.

Eminem proves capable of carrying the lead, at least when the material is tailored to fit. Rather than show great range in his first outing, he gives an effective slow burn. Phifer gives a charismatic performance as the immensely likeable Future while Miller and Wilson have great repartee as unlikely brothers. Evan Jones plays like a teen version of John C. Reilly. Basinger gets to slum and is effective as a needy, almost washed up beauty, but Murphy shows no new stripes and Manning is underutilized.

Hanson has achieved fine results with a largely inexperienced cast, while also bringing the weedy parking lot flavor of Detroit's 8 Mile Rd. to the screen. The soundtrack, featuring several new Eminem cuts, was amazingly easy to take for someone who normally detests rap.

Jimmy Smith Jr. (Marshall "Eminem" Mathers III), AKA hip-hop aspiring B. Rabbit, lives within the 8 Mile Road loop of Detroit that separates the suburban middle class neighborhoods from the inner city. His poet's soul lives under the yoke of a trailer trash upbringing, no money and a case of stage fright that keeps him from performing at the local rap club. But Rabbit comes to realize that destiny is really his to control in director Curtis Hanson's "8 Mile."

We first meet Jimmy as he prepares to take part in a rap battle at the local club, The Shelter. He practices in front of the club's men's room mirror, throws up then heads on stage where he freezes with insecurity. He dolefully walks away, hopeless that he is going to be stuck in a go nowhere factory job. Making matters worse, he broke up with his girlfriend and he is forced to move in with his trailer park mom (Kim Basinger) and her not-much-older-than-Jimmy live-in boyfriend, Greg (Michael Shannon). Rabbit's only solace is among his crew, named Three One Third, and the new love of his life, Alex (Brittany Murphy). With his loyal supporters behind him, will Jimmy break through his stage fright and break out of the ghetto?

"8 Mile" is a very moral story where the hip-hop players duel each other with words rather than guns. This is a case of the pen being far mightier than the sword as the combatants face off against each other with their poetic, non-violent rapping instead of with automatic weapons. There are guns evident, though, in "8 Mile." To not have them would require a major suspension of disbelief of inner city life but, here, they are not fired in anger. The one time a gun is shot off it wounds the shooter accidentally.

The qualities of "8 Mile" extend beyond the not bad acting debut by its star, Eminem. Helmer Hanson keeps his star's dialog to a minimum, relying on extreme close ups of the rapper's expressive eyes to show emotion and a well utilized, strong supporting cast to take the pressure off of Eminem to carry the entire movie. Mekhi Phifer is convincing and likable as Rabbit's close friend and fervent supporter, Future. Kim Basinger does a solid job as Jimmy's desperate single Mom who just wants a man to take care of her, despite the emotional cost. Brittany Murphy is wasted as the love interest that seems to be moving to her own agenda, adding nothing to the film except the obligatory sex scene. The members of Three One Third - Sol George (Omar Benson Miller), D.J. Iz (De'Angelo Wilson) and Cheddar Bob (Evan Jones) - are Jimmy's friends, fans and supporters who stick by him no matter what (especially Jones as not too bright but totally loyal Bob) and give dimension to their characters.

Director Hanson takes his star's semi-autobiographical story of his rise from the inner city to bad boy fame and tempers it to reinvent the rapper into a kinder and gentler being. The "Rocky" clone script, by Scott Silver, immerses the action within Detroit's 8 Mile loop as white boy Bunny Rabbit, a fast minded and fast-talking rap star wannabe, goes against the local favorites at the weekly battle of the rappers hosted by Future (Phifer). These "shootouts" rep some of the best moments in the film as the poets (I'm reluctant to call the hip-hop lyrics "music" as it is, to me, more like rhythmic poetry than song) go against one another in a crowd-pleasing one-upmanship contest. The word-smithing is intelligent, clever and sometimes funny. Rabbit uses his self-deprecating poems as a two-edged sword against his opponents, dis'ing his own condition to take the wind out of there rap rebuttals.

"8 Mile" benefits, also, from solid techs all around. Lenser Rodrigo Prieto keeps the camera working around the club action with fast moves and tight close-ups. Location in inner city Detroit won't make it a destination for many vacationers but it captures the degeneration to which this once mighty industrial center has descended. Working class costuming by Mark Bridges fits the bill. Music is a mix of original work by Eminem and a bunch of other rap artists such as Dr. Dre, Kid Rock and more.

The film ends on a positive, though not stereotypical, note that has our hero walking off into what could be a successful future. If the audience that I saw the film with is any indication, "8 Mile" could be huge enough to spark a follow up sequel of the next phase in Rabbit's road to fame. Middle-aged folks may not be attracted to the film rap base but the built in youth demographic will love it.