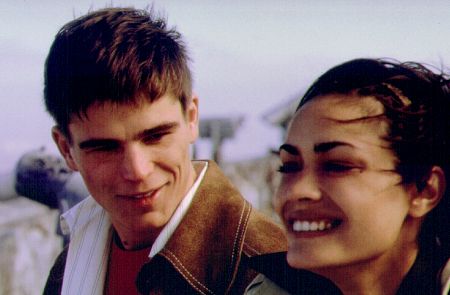 After Matt (Josh Hartnett, "Black Hawk Down") gets dumped by his girlfriend Nicole (Vinessa Shaw, "Eyes Wide Shut") he embarks on a series of one night stands that leave him feeling anxious and depressed.  A pre-Lenten visit to the confessional and his brother, an aspiring priest, gives Matt a soul cleansing idea - he'll abstain from any type of sexual encounter for "40 Days and 40 Nights."

With the possible exception of "The Truth About Cats and Dogs," director Michael Lehmann has shown little of the promise of his debut "Heathers," yet his name attached to a project continues to inspire hope.  Be prepared to lose faith as the most charitable thing to be said about "40 Days and 40 Nights" is that it plays like a teen sex comedy filtered through the relative sophistication of urban twentysomething hi-tech workers.

Of course, immediately after making his vow, Matt meets the woman of his dreams at the laundromat.  Erica (Shannyn Sossamon, "A Knight's Tale") is the opposite of Nicole, dark vs. blonde, funky vs. sleek.  Rather than tell Erica the truth, Matt tantalizingly builds their relationship until Erica finds out about his vow on the internet, where his coworkers have begun a betting pool, and feels betrayed.  Except for one small (and disagreeable) twist, the film plays out just about the way you'd expect.

Lehmann's done a good job with his cast.  Hartnett is certainly appealing and the males who surround him at home (roommate Ryan played by Paulo Costanzo, "Road Trip") and work (Glenn Fitzgerald, "The Believer;" Terry Chen, "Almost Famous;" Kai Lennox, "Boogie Nights" and Michael C. Maronna, "Slackers") add a lot of levity and natural male camaraderie to the proceedings. Sossamon is more natural here than in her debut, comfortable in her own skin. Adam Trese is amusing as Matt's conflicted brother and veterans Barry Newman and Mary Gross are funny as their parents, even though their material isn't.

"40 Days and 40 Nights" has a few chuckles and but its temptations offer no revelations.

Matt Sullivan (Josh Hartnett) is an up-and-coming Internet web designer who has, unfortunately, just lost the girl of his dreams. A string of unfulfilling one-night stands doesn't help matters and he seeks the help of his brother, John (Adam Trese), a priest in training. John's clerical dedication gives Matt a great idea: no sex, whatsoever, for the 40 days of Lent. But, our hero doesn't know what he's getting in to - no touching, no kissing, no foreplay, no fooling around and no self-gratification - in "40 Days and 40 Nights."

This is a movie of lost opportunity. On the surface everything looks like this could be a charming romantic comedy with a twist - our hero decides that no sex, at all, will set him free. This decision, based on Matt's Catholic upbringing, is ready made for fun. Once his best friend and roommate Ryan (Paulo Costanzo) learns of the vow, he immediately gets the word out. Suddenly, without his knowledge, Matt becomes a minor celebrity. His friends at the offices of bigwindow.com, when they learn of their coworker's oath of celibacy, immediately start an office pool and, more importantly, create a web page (with advertising links to porno sites) to track Matt's progress and the betting. (This gambling bit - betting on a friends sex life - is an old saw that has been around for eons and is brushed off, once again, to be used in "40 Days....)

The screenplay, by Robert Perez, uses the routine humor one expects in this kind of post-teen flick. Much sexual innuendo, slapstick sex humor, erection gags, sexy babes and titillating nudity (the female kind, to make us guys happy about seeing a romantic, no-sex comedy) are used to appeal to the tweenie target audience. Unfortunately, the story does not maintain its focus on Matt's plight and diverts in a number of directions that distract from the trial and tribulations created by the hero's vow.

The main body of this modern parable follows Matt from his breakup with Nicole (Vinessa Shaw) through a series of meaningless sexual encounter to his fateful decision to forgo sex in any form. Initially, after the vow is made, Matt is reborn. He focuses his undiminished sexual energy to his job, building model cars and thinking about not thinking about sex. Right from the start of honoring his vow he meets a pretty young lady, Erica (Shannyn Sossamon), at the local Laundromat and immediately becomes totally smitten with the vivacious creature. As they begin dating, Matt fully expects to keep the relationship platonic until he fulfills his oath. Of course, in another typical plot device, Matt doesn't tell Erica why he has not once even tried to kiss her. Also, she is a cyber nanny who polices the Internet to protect families with kids for the plethora of web porno - guess what site she stumbles upon?

This little love story, hindered by Matt's well-meaning vow and the betting pool it spawns, should have been enough to build to a logical, amusing conclusion. Director Michael Lehmann and scribe Perez apparently decided that this is not enough for the viewer to chew on as they introduce side stories to flesh things out. Matt's brother, and faux confessor, John has his own struggle with his decision to join the priesthood and struggle with temptation is carried through to an unexpected end involving a nun - I'll go no further with that one. Matt's boss, Jerry (Griffin Dunne), has problems with his married sex life and takes a page from his employee's vow in order to get more nookie from his wife - to less than successful results. Another interlude (admittedly amusing but a non sequitur in the overall scheme of things) has Matt and John visit their parents (Barry Newman and Mary Gross) for dinner, only to be regaled by dad on the sex therapy his hip replacement requires - with mom's lustful remembrance of their past sexual encounters. There is more fodder in the script than the filmmakers can handle properly.

I had expected this to be a breakthrough for Josh Hartnett and he does an equitable job in showing Matt's spiral down to confusion, insecurity and paranoia - and horniness. But, with so many other things going on, the spotlight pulls away from the lead too often and, without the comedy background, the actor seems to be wrestling with his role as the film progresses. Shannyn Sossamon, who was not notable as the love interest in last year's "A Knight's Tale," comes across more positively as the object of Matt's budding affection. The camera loves to linger, in close up, on her exotic features, though the clunky, waif-like costuming (by Jill Ohanneson) is too obvious a contrast to that of the sexy Nicole's.

"40 Days and 40 Nights" is less than I had hoped for - a smart, romantic, funny comedy - but just about what I expected. Helmer Lehmann moves his actors around with comfortable ease, but the script he is working from is too fragmented to capture my heart and mind. It will do well with the young folk out there but won't break out of its youthful demographic. Josh Hartnett should rate high on the teenage fem hunk-o-meter.