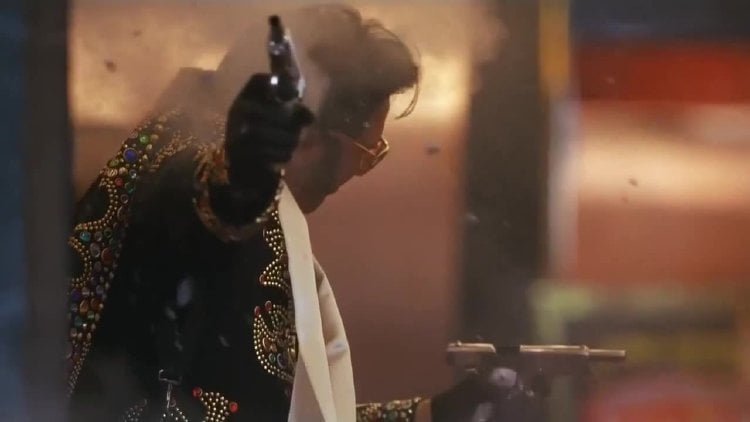 International Elvis Week in Las Vegas draws a flood of King wannabes in sequined jumpsuits and mutton chop sideburns. But, five copycats that enter the Riviera Hotel and Casino have plans of their own - armed robbery with really big guns. This is just the beginning of a tale of betrayal, murder and revenge, starring Kurt Russell and Kevin Costner, in "3000 Miles to Graceland."

Murphy (Kevin Costner) is a hard boiled criminal who believe's he's the illegitimate son of Elvis. His former cellmate Michael (Kurt Russell) has agreed to meet him at the Last Chance motel outside of Las Vegas to pull off a unique heist. Murphy, Michael and Murphy's recruits Hanson (Christian Slater), Gus (David Arquette, "Ready to Rumble") and Franklin (Bokeem Woodbine, "The Rock") will become color coded Elvis impersonators under cover of the chaos of International Elvis week to rob the Riviera Hotel and Casino in "3000 Miles to Graceland."

Murphy and his gang arrive, pick up Michael, and perform their daring heist to the tune of $3.2 million. Unplanned is the massive body count left behind before the arrival of their escape helicopter on the building's rooftop. Unknown was Murphy's intent to murder his colleagues before heading north to launder the loot. A bulletproof vest worn by Michael and that stealing habit of Jesse's change Murphy's plans while Michael finds himself on the run with a woman he doesn't trust and her precocious son.

"3000 Miles to Graceland" is a pretty flashy ride, but suffers from shallow characterizations and an over-the-top ending (think "Con Air"). Lichtenstein mostly uses his music video background to good effect, only occasionally overstepping the line between feature filmmaking and imagery that should have been left on MTV. Technically, the film is slick, particularly in the shooting and editing of the early heist scene (cinematography by David Franco ("The Whole Nine Yards") who moves his camera up one side of a subject, over it and downside the other; editing by Michael J. Duthie ("Stigmata") and Miklos Wright).

Lichtenstein is less successful with his writing. It's hinted that Murphy is conflicted in his feelings for 'the King,' his purported father, but Lichtenstein doesn't go deep enough. Similarly, Michael is too much of a 'good' bad guy - he knocks guards out and shoots glass partitions out to slow down pursuers while his colleagues are massacring everyone in site - yet we're given no back story as to why he spent over five years in jail and why he's aligned himself with Murphy in the first place. Cybil is written as more of a plot device than a character.

The principal actors try to flesh out their characters, though. Costner is effective as a real evil villain - clearly he's having some fun with this role. Courtney Cox Arquette takes a shallow role and really runs with it. Russell is appealing, but the least successful at defining his character.

"3000 Miles to Graceland" is a fairly entertaining film that begins with a bang and ends with too much contrivance.

It has been a while since we've had a crime caper movie on a visual par with such films as "Con Air" or "True Romance," and it looked like "3000 Miles to Graceland" would fit the bill. We do get a pair of high-powered, heavy-ordinance shootouts, one early on and the other the dramatic finale, that provide the requisite thrills to grab the viewer's attention. But, these action bits are bridged with a cat-and-mouse chase as the two key figures, Michael (Kurt Russell) and Murphy (Kevin Costner), vie to take possession of the $3.2 million stolen from the casino.

Things start off amiably enough when Michael parks his vintage, candy-apple red, 1959 Cadillac Coupe de Ville convertible at the Last Chance Motel near Vegas. A local kid, Jessie Waingrow (David Kaye), steals the fancy valve caps off of the classic car and, to get them back, Michael meets the boy's mom, Cybil (Courtney Cox). Sparks fly between the lonely ex-con and the equally lonely Cybil and they have a romantic interlude. Then arrives Murphy and his three partners - Hanson (Christian Slater), Franklin (Bokeem Woodbine) and Gus (David Arquette).

Murphy, Michael and the rest, it turns out, are headed to Las Vegas for International Elvis Week, where thousands of the King's impersonators are gathering to honor their muse. The plan is, with all of the confusion in town, to hit one of the big casinos for a fortune. The heavily armed Elvises pull off the heist but are intercepted by security guards, ending in a violent shootout right in the middle of the casino. As the guys blast their way out, one of their number, Franklin, is hit and soon dies. When the remaining four thieves get together to split the booty, a conflict arises over Franklin's share. Hanson goes toe-to-toe with Murphy and loses, making it a team of three. When they head out to get rid of the body in an isolated place, Murphy tries to make their number just one - him.

Only Michael survives Murphy's attack and he tries to head off the killer from getting the loot. He teams up with Cybil and Jessie to get the cash laundered, all the while being relentlessly pursued by Murphy in a chase that ends with a major confrontation with the law.

I was a little disappointed, part way into the film, when the Elvises in Las Vegas bit falls by the wayside following the heist. It takes on a more personal note as Michael, Cybil and Jesse hit the road with Murphy in pursuit. Murphy has no trouble with killing and a string of bodies is left along the way as they all head for the Canadian border and freedom. But, this odd road movie takes on unusual proportions as greed kicks in and, for awhile, it's every man (or woman) for himself. At one point, Michael and Jessie are teamed as they chase Cybil who took the money and ran.

My complaint about "3000 Miles to Graceland" is the extended middle where double cross is met by double cross. While the personality dynamics is interesting, sometimes violent and sometimes amusing, it meanders along at times, making me wish for some judicious editing. The bookend violence of the story is shocking in its brutality and slick in its, no pun intended, execution. As the heist and subsequent shootout takes place, with fast, stylish inter-cutting between the violence and scenes from the dance floor where Elvis clones and beautiful showgirls sing and dance, unaware of the mayhem that is happening near by. The climactic finale is a Hollywood example of more bullets is better as Murphy goes out in a blaze of glory reminiscent of Jimmy Cagney in "White Heat."

Production credits are solid as we are brought into the fantasy world of Las Vegas and its International Elvis Week. There are Elvises in all shapes and sizes (there is even a dwarf Elvis who gets it during the heist) and this has some amusing turns with impersonators who look decidedly unlike the King. The gonzo gun duels are handled with fast camera work, faster editing and well choreographed violence. Videomaker Demian Lichenstein utilizes his music vid chops to infuse a hyper kinetic energy into the big shootouts.

The perfs are relegated to the four principles once the heist is over and Murphy thins the herd of contenders for the loot. Slater, Woodbine and Arquette get some mileage as the other members of the gang and, as they are offed, you wish there was more of them. But, the cast that's left does OK. Costner is surprisingly good as the taciturn and murderous Murphy. It is against his usual good guy persona and reflects one of his better performances of late. The likable Kurt Russell is the good guy among the bad and he gets to wear his shining armor to the end. Surprisingly, Courtney Cox delivers one of her better perfs as the sexy and human Cybil. Young David Kaye gives a good intro performance as the tough, self-sufficient Jessie.

"3000 Miles to Graceland" is not just a heist flick as the trailers reflect. It is that, but there is a larger story of greed, murder, betrayal and revenge that hones itself to a sharp point before the explosive ending. The two-hour run time could have been cut for a better film.