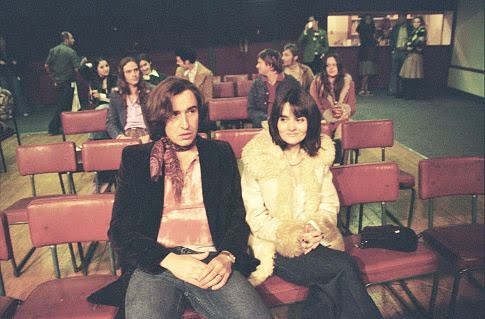 On June 4, 1976, 42 people gathered in Manchester to see the Sex Pistols. Almost everyone in the room would go on to fame and fortune. One man, Tony Wilson (comedian Steve Coogan, "The Wind in the Willows"), would also go on to ruin, but not before his Factory night became Factory Records, label of Joy Division, New Order and Happy Mondays. His Hacienda club would become the Studio 54 of Manchester and the birth the rave culture in "24 Hour Party People."

Michael Winterbottom's deliriously wacked mockumentary is a Pythonesque tour through the evolution of a music scene. Steve Coogan, whose British television character Andy Partridge was based on Wilson, gives a tour de force comedic performance in a most unusual role.

Frank Cottrell Boyce's ("Hilary and Jackie") screenplay uses Wilson as his central character, tour guide and audience confidante. The film begins as Wilson tries his hand at hang gliding for a spot on his regional television show 'So It Goes.' After several bumpy landings, he tells us that we're to note the symbolism of this opening and think of Icarus.

These confessions continue in most amusing ways. When 'Factory Night' pub owner Don Tonay (Peter Kay) invites Wilson outside to be pleasured by some hookers, Tony's caught by his wife Shirley (Shirley Henderson, "Topsy Turvy") who retaliates by snogging Howard DeVoto (Martin Hancock, "Liam") in a bathroom stall. 'I only got a blow job - that's full penetration' objects Tony. Then a cleaner (the real DeVoto) turns and informs us that this never happened.

The film's first hour charts Wilson's ascendance as a co founder of Factory Records and Joy Division's first booker. Joy Division, presented as the laddiest bunch ever to become a seminal art band, are front and center, with their brilliant engineer Martin Hannet's (Andy Serkis, "Topsy Turvy") hilarious disdain of Wilson juxtaposed against everyone's love of doomed epileptic front man Ian Curtis (Sean Harris). The first act closes with Curtis' suicide and Wilson's memorial - hearing the news as he interviews a period town crier, he has the man proclaim 'Ian Curtis of Joy Division has died today' for his broadcast.

The second act sees the successful Wilson achieve and lose his dream. As it is common knowledge that no band ever continues after the loss of its lead singer, Joy Division become New Order and record 'Blue Monday,' the most successful 12" single of all time. Factory Records lost money with each record sold because the artwork was so expensive. Wilson was convinced that Shaun Ryder (Danny Cunningham, "Loaded") was a poet and promoted the raucous Happy Mondays (authors of the titular song) into his own financial ruin as Ryder spent recording money on heroin. The Hacienda Club was packed every night, but the 'ecstatic' crowds had no need for its liquor and their drug sellers flooded Wilson's beloved Manchester with crime. 'My most heroic flaw was an excess of civic pride' Wilson notes. The man who wrote his first contract (with Joy Division), which essentially said their would be no contracts, in his own blood takes great pride in the fact that he could never be a sellout because in the end he had nothing to sell.

Winterbottom's film is an exuberant mess which is, in actuality, brilliantly put together. It's a heady rush that defies its audience to keep pace. Archival footage and recreations collide, as Coogan as Wilson dances in front of the real Sex Pistols. Margaret Thatcher's political climate is felt throughout even though it's the entertaining, non-stop anecdotes that are given front stage. Wilson's last night at the Hacienda, where he sees all the important people in his life, living and dead, is incredibly touching. Winterbottom then has Wilson see a Gilliamesque God on a rooftop and discover it is himself!

"24 Hour Party People" is the biography of an era. Let Steve Coogan take you on this affectionate magical mystery tour of 'Madchester' in this most original of movies.