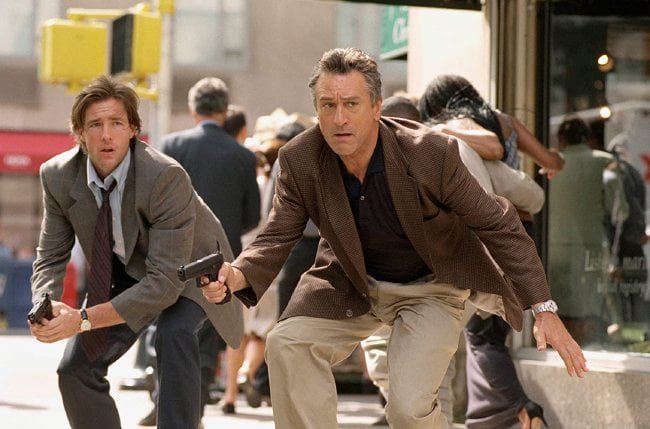 Andy Warhol once said, "In the future, everyone will be famous for 15 minutes." Now, in the media hyped criminal justice world of New York City, superstar homicide detective Eddie Flemming (Robert DeNiro) and Fire Marshal Jordy Warsaw (Edward Burns) must stop a pair of Eastern European killers from fulfilling this prophesy in writer/director John Herzfeld's "15 Minutes."

When arson investigator Jordy Warsaw (Edward Burns, "Saving Private Ryan") arrives at a burned out NYC apartment, he finds celebrity cop Eddie Flemming (Robert DeNiro) intruding on his crime scene. The two end up joining forces on the trail of fame seeking killers and the reluctant witness to their crime in writer/director John Herzfeld's ("2 Days in the Valley") "15 Minutes."

Andy Warhol's long lived quote is hammered down from every angle in this unsubtle but entertaining satire. We're introduced to Flemming as the repeat subject of a Hard Copy-like news program hosted by Robert Hawkins (Kelsey Grammer, TV's "Frasier"), currently battling his producer (Kim Cattrall) to maintain his lurid content. Hawkins is routinely tipped by his buddy Eddie to arrive on the scene just as Flemming is about to make arrests.

Meanwhile, new US arrivals Oleg Razgul, (Oleg Taktarov, "Air Force One") a Russian and Emil Slovak, (Karel Roden) his slow witted Czech buddy, make their way to their former partner's home for their share of stolen cash. When Oleg discovers he's spent time in a Russian prison for nothing, he brutally murders his old friend and his wife. Emil, who's stolen a digital video camera on the way there, videotapes the event. They discover too late that their crime has been witnessed by illegal alien Daphne (Vera Farmiga, "The Opportunists"), but she leaves her purse, including identification, behind. Ensconsed in a seedy hotel, Oleg calls Worldwide Escorts and asks for a Czech girl. When he doesn't get Daphne, the duo tape their third murder. Television introduces them to Hawkins, Flemming and his most famous case. Stephen Geller is a killer who's made a fortune from his crime because he got off on an insanity defense. Voila - the psychopath and aspiring film director now have a plan. 'I love America - no one's responsible for what they do.' gurgles Oleg.

Herzeld's script is a bit psychotic itself, zigzagging from satire to thriller, from comedy to excessively gruesome violence. The whole thing comes off as wildly over the top, but it's a fun ride, largely due to its heroic partners' bantering and its villainous partners' tomfoolery. Dual romances are less successful, with Flemming about to propose to television reporter Nicolette (Melina Kanakaredes, TV's "Providence") while Jordy makes eyes at forbidden witness Daphne. Thriller aspects are well done, with a top notch street chase scene admist midtown traffic and a tense fire entrapment which pushes Jordy's expertise to the limit. Herzeld has one surprise up his sleeve that makes one doubt its reality even after the fact, although he uses cheap cinematic tricks to set it up.

The cast is terrific with DeNiro utterly believable as a detective who works the fame game. Burns is fine as the laid back everyman who first loses, then wins, at the hands of the media. Grammer is pitch perfect as the sleezy tabloid host while Kanakaredes puts a worthier face on the TV news profession. Utterly diabolical, Oleg Taktarov suggests a young Gary Oldman, joyfully brutal, completely immoral. Roden plays auteur Emil like a wide-eyed puppy dog lapping at Oleg's heels, funny yet chilling at the same time.

An odd couple of crooks, a Czech named Emil (Karel Roden) and a Russian called Oleg (Oleg Taktarov), show up at US Immigration claiming to be on vacation. Their real agenda for coming here soon becomes apparent when they seek out their old partner, Milos (Vladimir Mashkov). Milos came to America with the loot from a caper while Emil went to prison for the crime. Emil wants his share and goes ballistic when told that all the money is gone, brutally killing his former partner and his wife. As Oleg videotapes the crime, another pair of unseen eyes is witness, too.

Later on, while Emil watches the "Roseanne" talk show - the segment is fathers who have sex with their son's wives - he suddenly realizes that America is not about hard work and integrity, it is about a fast buck and fame. When he sees People Magazine with its cover story about a psycho killer and the cop who brought him down (Eddie Flemming), Emil sees his sociopath behavior as the way to get away with murder and make a lot of money. Emil and Eddie's paths will soon cross.

>From the very beginning of "15 Minutes," we are slammed with the TV media force feeding a public that is hungry for grit, gore and reality. "Top Story" is the highest rated "news" show in the city and its anchorman, Robert Hawkins (Kelsey Grammer), almost makes you believe it when he talks about the journalistic integrity of tabloid TV. The reality of the sleazoid TV program, however, is ratings and Hawkins has no problem with the "if it bleeds it leads" mentality of his profession. To what lengths this brand of media will go to is gut-wrenchingly displayed when the incredibly violent confrontation between Eddie and Emil and Oleg is the top story on "Top Story."

The script, by the helmer, takes a fresh approach to the subject of media hype that has been plumbed many times in the past, most notably in Sidney Lumet's "Network." The 1976 black comedy took a tongue in cheek look at the lengths the media moguls will go to get ratings. "15 Minutes" takes a more dramatic approach to its own social statement, dealing with the responsibility (or lack there of) of the TV news media in a more serious vein. This approach could have been dour but Herzfeld interleaves black humor with the serious and has a terrific cast to boot. It is a scathing view into a world that thrives on violence.

Detective Flemming is a good cop and knows the importance of publicity. "It's all about image," he explains to Jordy as they, together, investigate a double homicide hidden by an arson job. DeNiro, who has been pulling off some good non-DeNiro roles such as his master chief in "Men of Honor," does a splendid job as a man who understands what the media really is and how to use it to his advantage. Eddie is also an astute judge of character and recognizes something of himself, 20 years ago, in Jordy and tutors the younger man in crime fighting and publicity.

Edward Burns brings a stoic intensity to his arson investigator Jordy Warsaw. He is initially resentful of Eddie's media savvy until he learns that the veteran cop uses the cameras only as another tool needed to get his job done. Jordy is the Luke Skywalker to Eddie's Yoda as the older man dispels the words of wisdom of a master crime fighter. The fact that Jordy is a fireman, not a cop, is another refreshing thing in "15 Minutes." Burns does a good job of showing the dedication, honor and hard work of an arson detective. It's nice when the unsung heroes of the fire departments get a song.

The casting of Karel Roden and Oleg Taktarov as Emil and Oleg is brilliant. The psychopathic Emil may be murderous and without guilt, but he knows, in his misguided mind, what the public wants and sells his grisly video footage to Hawkins for $1 million. Emil is ruthless and brutal and has a sick wit that is both creepy and funny. The big, amiable, child-like Oleg sees himself as a real filmmaker and dubs himself Frank Capra as his ever present, stolen camera records the crimes and Emil's cunning plan for fame, which becomes a prelude to his downfall. The two eastern Europeans are a big plus for the film. The rest of the supporting cast gives solid, believable performances.

Technically, "15 Minutes" is about as slick and well made as movies can get. The production design, by Mayne Berke, puts you right in the middle of an arson scene so you can almost smell the smoke. Another bit of fire buggery later in the film bears similarity to Ron Howard's "Backdraft" - fire becomes a dangerous and relentless character of its own. Photography by Jean Yves Escoffier masterfully captures the proceeding in multiple ways, including the rough camerawork by Oleg as he records his American directing debut.

There are some problems with the story that brings it down a notch. There is a romantic bit between Eddie and his TV reporter girlfriend Nicolette (Melina Kanakaredes), but it has a tacked on feel and doesn't add anything to the story. I also have a major problem with how Eddie and Emil finally get together. Eddie inconceivably lets his guard down at that one critical moment and it is totally out of character with the man. The scene plays out well, but how we get here is contrived. Another romance between Jordy and murder witness Daphne (Vera Farmiga) isn't played through to a satisfying conclusion.

Despite its flaws, "15 Minutes" is good drama that tells its story in a fresh, interesting way. Good acting by all helps out too.