Thirteen Conversations About One Thing 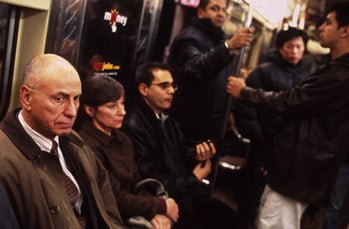 What is it that makes us happy? Screenwriters Jill and Karen Sprecher ("Clockwatchers") examine the subject through the lives of several very different New Yorkers, beginning at the end of a claim adjuster manager's tale just as he crosses paths with a prosecuting attorney who's story is about to begin in "Thirteen Conversations About One Thing."

The Sprecher sisters debuted with a good, if not particularly noteworthy, look at a group of female office workers with "Clockwatchers," but in their sophomore effort deliver a screenplay more ingeniously constructed than "Memento." This melancholy probing of the human condition suggests that while we ultimately are the creators of our own happiness, a sense of responsibility for the rest of the race is its most basic ingredient. "Thirteen Conversations About One Thing" may produce the effect desired in its audience by "Pay It Forward" without the sodden preachifying.

Gene English (Alan Arkin, "The Slums of Beverly Hills") is a divorced father of a junkie son, soured on life, who dances to the desires of the bosses upstairs in his insurance firm. He finds the cheerfulness of Wade 'Happy' Bowman (William Wise, "In the Bedroom") to be a personal affront and bets his senior adjuster buddy Dick (Frankie Faison, "Hannibal") that he can take the smile off of Happy's face, but comes to regret and rectify his venal actions.

Troy (Matthew McConaughey, "Frailty") is a hot shot prosecutor who gets high on putting criminals behind bars, until he becomes the perpetrator of a hit and run. Guilt causes him to keep reopening the wound he received from the accident and the experience causes to empathize with a man accused of murder.

Walker (John Turturro, "O Brother, Where Art Thou?") is a physics professor reevaluating his life after becoming a victim of random violence. The return of his wallet uncovers his affair with an English professor (Barbara Sukowa, "Rosa Luxembourg") to his wife Patricia (Amy Irving). She sadly begins a new life while he plummets into an uncomprehending spiral.

Beatrice (Clea Duvall, "Girl, Interrupted") is a simple housecleaner whose sunny optimism is relied upon by her 'life-owes-me-a-living' coworker Dorie (Tia Texada, "Nurse Betty"). Even a horrific accident doesn't make Beatrice down, but a stranger's mistrust changes her outlook dramatically.

The brilliance of the Sprechers' script is more than its concurrent forward reverse time line. They continuously double back, using title cards to quote the observation of one character to introduce the next incident in the life of another. Characters are continually paired. Happy and Beatrice both bring sunshine to those around them, with one even pulling another from the abyss. Walker's misery is reflected in Gene's son Ronnie's doomed life. We'll find the perpetrators of those random acts of violence within the film's neighborhood.

Visual ties are used as well, such as the white shirt which escapes Beatrice's hands upswept in a wind guest later recalled by swirls of paper descending into the alley where Ronnie shoots up (both reflective of "American Beauty's" plastic bag). The fate of one of Walker's students is predicted on his own blackboard. Beatrice's decrepit winking doll head, a symbol of a childhood rescue, becomes a bleaker symbol when its closed eye opens.

The visuals, though, are the one weakness of the film, which is drably and unimaginatively shot in boxy 1.65:1. Still they're pieced together by Stephen Mirrione ("Traffic") using editing of omission and implication befitting the ingenious construction of the screenplay. The fanciful score by Alex Wurman ("Play It to the Bone") uses piano and harp to give an airiness to the sometimes somber proceedings.

Director Jill Sprecher artfully guides her carefully cast ensemble with Alan Arkin as linchpin. Arkin is a master of the soliloquy, whether comedic or dramatic, and he plays his signature line, 'Fortune smiles at some and laughs at others,' to both ends of the spectrum. He makes his character's quiet display of compassion sing. McConaughey, who is regaining acting momentum in independent cinema, skillfully moves from slick predator to tortured soul. Clea Duvall glows with such an inner light (never more so than when singing in a church choir), her temporary attack of cynicism is all the more disheartening. But her entropy isn't entirely irreversible, as it apparently is with Walker. John Turturro's performance is affecting in that he can make us feel for a man so cluelessly miserable.

"Thirteen Conversations About One Thing" achieves on many levels. It's humanity is summed up in its final scene, where an en lighted Gene English's small wave to Walker's saddened ex-wife from across a subway platform brings a moment of heartening connection.

A man is in the midst of a mid-life crisis. A woman must cope with her husband's infidelity. A young lawyer's life is ruined in a single careless act. A pessimistic insurance man can't take the constant cheerfulness of one of his workers. A young cleaning woman's unabashed optimism is destroyed in an instant. It's just another day in New York City in sophomore helmer Jill Sprecher's "13 Conversations About One Thing."

Sprecher's first feature was a cinematic exercise about the mundane lives of temp worker called "Clockwatchers." It wasn't my cup of tea, so I didn't hold much in the way of anticipation for her second effort. Boy, was I pleasantly surprised. "13 Conversations About One Thing" is a complex story that, at its base, is about happiness and all of the good and bad it can bring.

Troy (Matthew McConaughey), a pampered young guy born with the proverbial silver spoon, is an up-and-coming prosecutor who has just won his first big case. Celebrating with his colleagues at a local tavern, he meets an older man sitting at the bar drinking his shot and a beer. The man, Gene English (Alan Arkin), seeing the lawyer's obvious ebullience, regales him with stories about happiness turned sour. "Fortune," he says, "smiles on some and laughs at others." When they part, their lives and the lives of those they touch become a story told both forward and backward.

Jill Sprecher and her cowriter/sister Karen have created an intricate modern day urban yarn that is told in chapters based on what the characters experience in this study of human nature. The complexity of the stories told and the interplay between characters are the raison d'etre for seeing "13 Conversations" and, as such, I won't delve into telling any of the stories for fear of ruining it for you. Suffice it to say that, if you appreciated the cleverness of "Memento," you will love the forward and backward intertwining of lives and tales here. There are some loose ends left at the end of the story but this is minor criticism considering the overall deftness of the storytelling.

The superior ensemble cast members are given various degrees of focus through the film. Alan Arkin is on the money as a man so used to things negative that he can't stand to see anyone happy, particularly one of his employees, Wade "Smiley" Bowman (William Wise), a poster child for the word "happiness" if there ever was one. Gene's vengeful glee when he bursts Smiley's happiness bubble turns bitter when he realizes his mean spiritedness. Arkin gives the character nuance and you experience the changes he undergoes with his personal revelations. McConaughey gives one of his better perfs as the hotshot, Troy, whose life changes in the blink of an eye. The actor gives his character the haunted, tormented look as he tries to cope with the single, selfish action that ripped his happiness away.

Clea DuVall is sweet and likable as the innocent housekeeper, Beatrice, who has known, since childhood, that she is destined for something special and wonderful. When things go drastically wrong for her you feel her pain. It's a solid, well-acted perf by the young actress. John Turturro never really fleshes out his mid-life crisis character, Walker, and I never cared about the man. Amy Irving, on the other hand, as the cuckolded wife, gives a thoughtful, melancholy perf in a small role. The rest of the supporting cast gives good measure, especially William Wise as the perpetually happy Smiley (and the only one who maintains his happiness through the entire film).

"13 Conversations About One Thing" is an intelligent flick that examines many different ideas from happiness to guilt in an intriguing bit of storytelling.