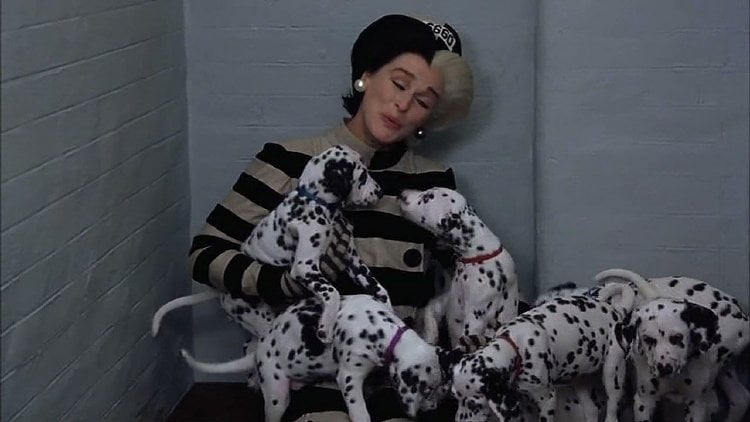 As the 2nd Chance animal shelter struggles to stay afloat and the now grown up Dipstick is about to become a father of three, Cruella De Vil (Glenn Close), cured of her fur loving ways by behaviorist Dr. Pavlov, is released from prison. Dipstick's owner Chloe (Alice Evans, "Le Dernier Secret") is dismayed to learn that she's Cruella's parole officer, but De Vil, begging to be called 'Ella,' becomes an animal rights crusader, injecting time and cash into 2nd Chance. But Dr. Pavlov discovers that his therapy is easily undone and soon De Vil is secretly teaming up with designer Le Pelt (Gerard Depardieu) to create her dreamed of spotted coat in Walt Disney Pictures' "102 Dalmatians."

De Vil is picked up at the prison gates by her faithful servant Alonso (Tim McInnerny, "101 Dalmatians"), who presents her with a gift - Fluffy, a Chinese crested dog. She then orders him to rid her manse of her furs, which get boarded up in a dungeon like room, along with her drawn design of her spotted coat. The tolling of Big Ben snaps her out of her charitable ways, however, and soon she's revised her design to include a hood, requiring one more puppy than the original pattern. (Her transformation puts her into a delusional state where the entire city of London bears Dalmatian spots, a fun effect.)

She begins secretly stealing puppies to be shipped to France and manages to frame Kevin (Ioan Gruffudd, "Titanic"), 2nd Chance's owner and Chloe's budding love interest, for the crimes.

Once again Close proves herself a trooper as the outrageous De Vil. She's a hoot. Evans is a bit too squeaky clean as Chloe, but Gruffudd is charming as the boyish Kevin. McInnerny is sympathetic as Alonso, De Vil's unwitting accomplice. However, Depardieu is utterly wrong for this film and his character and wardrobe should have been either completely revamped or banished. His French pronunciation of puppies as 'poopies' is supposed to pass for high humor.

The animals are terrific and given an injection of new blood by Fluffy and the inhabitants of 2nd Chance, which includes Waddlesworth, a Macaw who thinks he's a dog. Chloe's three puppies include Oddball, a pure white pup traumatized by its lack of spots, who's always getting into trouble.

The screenplay by Kristen Buckley, Brian Regan, Bob Tzudiker and Noni White echoes Disney trademarks, such as reinventing the twilight bark in a puppy version and contrasting the spaghetti and meatball scene from "Lady and the Tramp" with Chloe and Kevin's first date. "The Wizard of Oz" even comes to mind as Cruella locks Chloe up in her dungeon match as the witch cages Dorothy (and her little dog, too). They've also cooked up a nice parallel with Oddball's spot issue and Waddlesworth's inability to fly. Dialogue includes some pithy lines for Cruella ('The last time I underestimated a puppy, I ended up in the pokie.') However, besides the Le Pelt problem, the climatic ending is far too reminiscent of this past summer's "Chicken Run."

Oscar winning costumer designer Anthony Powell returns (as does most of the behind the scenes crew) and does some brilliant work for Cruella. Her black and white prison garb is hilarious and he cleverly presents her in a Chanel suit - in a houndstooth pattern! Powell even makes her resemble a nun. The black and white mane is smoothly coifed until the evil in De Vil returns. His work for Le Pelt, however, is another story. Depardieu is presented in what looks like a strong man's outfit made of fur sporting a truly ridiculous hairstyle.

Animation director Kevin Lima (Disney's "Tarzan") confidently handles his first live action film. While it has problems, it's paced well enough that we don't dwell on them. "102 Dalmatians" will be fun for the kids while keeping the adults entertained as well.

The holiday release of "102 Dalmatians" comes as no surprise following the $300-million plus worldwide gross for the 1996 live action remake of the 1961 seminal Disney animation, "101 Dalmatians." The focus of the new film is on Cruella De Vil right from the start as we meet the penitent psychiatric patient who has learned to love animals, not wear them. But, we know something is going to wrong, drastically wrong, and the wicked Cruella will turn to her old, evil ways. This time, it's up to the spotless little Dalmatian Oddball and the rest of the canine crew to put a stop to Cruella's latest, wicked plans.

When Cruella leaves the psychiatric care of Doctor Pavlov (David Horovitch) she is fully cured of her infamous fur fetish and the terms of her parole dictate that she never steal another puppy. If she violates the rules of her release, her remaining wealth, 8-million pounds, will be given to the dog shelters in the county. But, Cruella has become "Ella" and is a changed woman who dedicates her life to the safety and well being of the canine population. She selects a failing, ramshackle animal shelter, The 2nd Chance, run by kindly naof Kevin Shephard (Ioan Gruffudd), as her rehabilitation project and throws herself into her philanthropic work. Kevin honestly believes that Ella is a changed person and lets her fund the shelter's rebuild. Not so for Ella's doubtful parole officer Chloe Simon (Alice Evans), a Dalmatian owner herself, who doesn't think that a leopard like Cruella can ever really change her spots.

Chloe is proven right when the striking of the bells of Big Ben toll the end of Dr. Pavlov's experiment as Ella disappears and Cruella De Vil reemerges in all her wicked glory. She is now bound and determined to get her precious spotted coat and even enlists the help of her arch rival in the fur world, Jean Pierre Le Pelt (Gerard Depardieu), to collect the 102 Dalmatian puppies she'll need to create her ultimate design - now with hood. Kevin and Chloe are pretty helpless in stopping Cruella with Kevin being framed and arrested for the theft of some of the pups, so it's up to Chloe's canine companions, Dipstick (son of Pongo), his mate, Dottie, and their puppies, Little Dipper, Domino and Oddball, to foil Cruella's cruel plans. Oddball is the only spotless one in the clan, which makes him the over-achiever needed to lead the puppies and the other canine colleagues against Cruella and her lethal scheme.

One area where "102 Dalmatians" misses the mark is its audience aim. There is far too much talky dialogue and adult level humor and too little stuff for the smaller kids. Don't get me wrong, the puppy (or "poopy" as Le Pelt calls them) action is fun and exciting, especially the big climax/chase that enters an enormous automated bakery that proves to be Cruella's downfall. But, there isn't enough of this kiddy-level action. You could hear the noise level increase in the theater as the smaller kids got bored with the plot hatching between Cruella and the fur-clad Le Pelt. Not giving the younger kids something to occupy their attention is going to be very annoying at full theaters where the adults won't be able to hear the higher brow humor because of the din of the youngsters.

The humor is, overall, more geared to the adults and older kids in the audience. There is a dark, sinister nature to the film in the second half, culminating in Cruella being thrust into an oven a la the wicked witch in the "Hansel and Gretel" fairytale that provides some disturbing images. The mayhem is only implied and never realized through the film, but the idea of a just dessert ending for Cruella borders on the scary, especially for younger auds.

While the animal stars don't speak (with one notable exception that I'll get to in a moment), the filmmakers still get some remarkable performances out of the canine cast. Mom and Dad Dalmatians, Dipstick and Dottie, are shown as a loving couple who adore their kids. The human-like spin that is put on their interaction has the same anthropomorphic feel as Disney's animation, "Lady and the Tramp." (The spaghetti scene from the older animation is used to propel the love story between the good guys, Kevin and Chloe.) My favorite animal "performance," though, is voiced by Eric Idle as the neurotic Macaw, Waddlesworth. The parrot, it seems, believes that he is, in fact, a dog and not a bird at all. His neurosis, coupled with sharp-tongued, witty dialog, makes the very vocal bird an odd but endearing member of the team. Even when Waddlesworth does fly like an eagle, he declares, "I'm not a rottweiler, I'm a retriever." He steals the show whenever he gets a word in.

The human actors don't fare quite as well as their furry and feathered counterparts, though. Except for Glenn Close, who has a remarkably good time and gives her all to the character of Cruella - the actress does much of her stunt work in the big climax - the other humans aren't given much to do. Depardieu's Le Pelt must have looked good on paper, but the big actor just seems out of place. Gruffudd and Evans, as Kevin and Chloe are there, well, because the script says the characters exist. Neither actor is given a real character to work with and there isn't much the amiable-seeming thesps can do to reverse this. Tim McInnerny, as Cruella's manservant Alonso, is the only other human, besides Close, who gets to put any meat on his character's bones. Alonso suffers from conflicted loyalty as he is faithful to his employer but also has a good heart and is against the plot to create the "hooded spotted poopy coat."

Costuming by Academy Award winner Anthony Powell is a major asset for the film. Cruella is outfitted in some of the most bizarre and interesting creations since Queen Whatsherface in "The Phantom Menace." From the very start, when we meet her, fully rehabbed, in her striped prison togs with the jaunty cap emblazoned with her prisoner number, "6660," we are seeing a tour de force in costumes. Most interesting are the "Ella" outfits as the reformed Cruella shuns furs and takes on a clever political correctness. (I was even told that one outfit is in a houndstooth pattern - hee hee.) Ella is a true matron of her cause and looks every bit the lacquered lady - check out her "nun's habit" outfit she wears as she emerges from prison. It's brilliant. Her change back into Cruella literally springs out at us as it harks back to the 1996 film with fur taking over, once again, as the principle material du costume. The fur motif doesn't work anywhere near as well for Gerard Depardieu, who looks more like a well-groomed bear in the furry costumes for Le Pelt.

Everything around the action - the aforementioned costumes, the innovative sets by Assheton Gorton and the sparkling photography by veteran lenser Adrian Biddle - help keep the production on an even and high quality keel. First time live action helmer Kevin Lima, who so able handled the Disney film "Tarzan," utilizes his animation skills to bring the necessary cartoon quality that marked the original as a hallmark family film. The weakest point is the script by a gaggle of writers - Kristen Buckley & Brian Regan (from their original story) and Bob Tzudiker & Noni White - which has to follow up on the charm of the original story by Dodie Smith. The scribes do a fair job, but the story feels like it's done by committee. The ending drags on too long so the whole effort seems more extended than its 90+ minutes.

The puppies are cute and Cruella remains an icon of wickedness, but I hope that "102 Dalmatians" is it. I don't think I can take "103 Dalmatians."