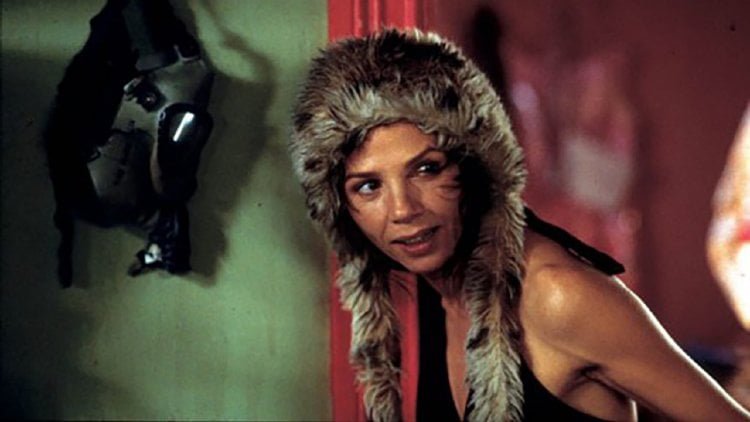 Hlynur (Hilmir Snaer Gudnason) is the slacker to end all slackers. 30 years old, chronically unemployed and on the dole and still living with his mother, our young anti-hero's life is about to go haywire with the arrival of a beautiful Spanish flamenco dance teacher in Icelandic director Baltasar Kormakur's feature film debut, the dark and funny "101 Reykjavik."

30 year old Hylnur (Hilmir Snaer Gudnason, "Angels of the Universe") is an able young man who lives on disability and strives to do nothing. He's taken care of by his incredibly patient mother Berglind (Hanna Maria Karlsdottir) who succeeds in shaking him out of his stupor by inviting a visiting flamenco instructor, Lola (Victoria Abril, "Tie Me Up! Tie Me Down!") to stay in their tiny apartment at "101 Reykjavik."

Adapted from the novel by its author Hallgrimur Helgason and director Baltasar Kormakur (seen as the mad scientist in "No Such Thing"), "101 Reykjavik" is the romantic comedy with a twist that "Kissing Jessica Stein" professes to be.

Kormakur gives us a look at both the nightlife Reykjavik's becoming famed for and the ennui of its youth who party for lack of anything else to do. Absurdist comedy abounds, such as when Hylnur's accosted for paying other people's expiring parking meters by a flustered meter man or when he imagines massacring his boring family after Christmas dinner (they comment on the weather before watching a video of themselves having the same conversation a year earlier). The Kinks' "Lola" is not only used as Lola's signature tune, but its lyrics are woven into the Icelandic story as well. All this from a film which begins with its hero opining that 'Life is an interruption from death.'

"101 Reykjavik" is funny, sexy, and utterly moored in its distinctive landscape.

Helmer Kormakur based his screenplay on the novel, of the same name, by Hallgrimur Helgason. Hlynur's only ambitions in life is to sleep 'til noon every day and spend his evenings at the local hot spot, doing one night stands and sort of carrying on with his occasional girlfriend Hofi (Thrudur Vilhjalmsdottir - I love these Icelandic names!). When his mom (Hanna Maria Karlsdottir) announces that they will have a new roommate, Lola (Victoria Abril), who teaches Latin dance in the town, Hlynur greets the news with his typical indifference.

Mom has to go away for the holidays to visit an aging relative and leave her son to entertain the vivacious Lola. Sparks fly and, in a drunken display of passion, the two get it on, energetically. Things are looking pretty good to Hlynur until his mother returns and tells her son that Lola is her lover and that they are going to have a baby together. Lola, it turns out, is pregnant, but denies that he is the baby's father. The turmoil that ensues in Hlynur's life turns out to be his coming of age - a little late in life, sure, but growing up is growing up.

Gudnason does a marvelous job of balancing what is a very negative, not-very-likable character with a spark of empathy that makes us want to watch the changes and upheavals in Hlynur's slacker life. The underlying edge of caustic wit that envelops the character keeps him from becoming an unlikable lunkhead. Spanish actress Abril provides the zesty heat of a good salsa to the cold, austere climate that cloaks Reykjavik. While the environment is harsh and snow-driven, Lola gives everything a warmth that pervades the film wonderfully. Karlsdottir is also terrific as the mom whose son, unknowingly, harbors a raging Oedipal complex for her.

Techs are straightforward with cinematographer Peter Steuger doing a decent job in giving a bit of a travelogue look into a land that is seldom seen in the west. The script depicts a let's party atmosphere among the locals as casual sex and drinking heavily seem to be the goal of youthful existence in this Arctic Circle town. The deft story telling and amusing tale of one slacker's life makes "101 Reykjavik" a truly international film that deserves to be seen. You won't get the slick production of a Hollywood film, but there is more intelligence and humor in this 93-minute diamond-in-the-rough than in 10 American coming-of-age flicks.